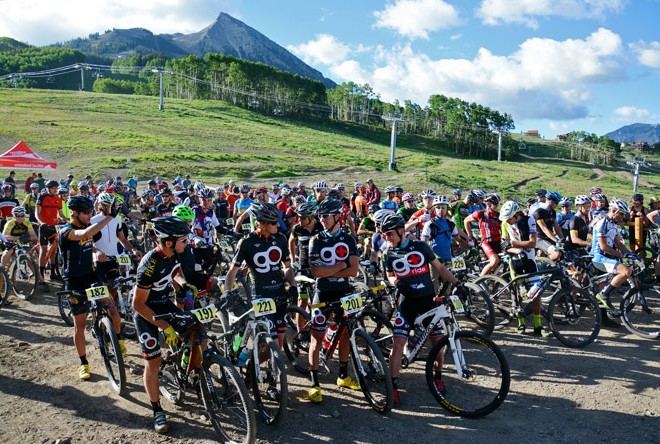 Last week I saw a guy on a Klein Pinnacle. Remember those bikes? Remember those colors? My first Klein Pinnacle sighting was at Fat Tire Bike Week in 1992 and it was beautiful. The one I saw last week, not so much. It just so happened that very same day I was on a ride with a friend and we were discussing past mountain bike technology—biopace chain rings, U-brakes and the PowerBar Malt-Nut flavor.

“There’s no doubt about it, it should be a huge event,” says chamber director Dave Ochs.

The week, formerly known as Fat Tire Bike Week, has been through its fair share of ups and downs in its 30+ years of existence but started taking off again with the inception of the Fat Tire 40, the Chainless World Championships and the overall growth of the mountain bike industry. There’s even a question in Trivial Pursuit, the Genus 5 edition, about the “Fat Tire Bike Festival Race in Crested Butte.”

This year the chamber has upped the ante, bringing in cash prizes for the first time for the Fat Tire 40 and adding more events, as well as returning to the good old days by partnering with the Crested Butte Mountain Bike Association (CBMBA) for the event.

“We’re getting back to the original days of Fat Tire Bike Week,” says Ochs. “The goal is to support the club that puts the labor into building and maintaining trails around here.”

Overall, the week has been tweaked to focus on clinics and ancillary bike-related activities at the start and then close with a bang with the Chainless World Championships on Friday, the Fat Tire 40 on Saturday and, at the Evolution Bike Park at Crested Butte Mountain Resort (CBMR), downhill racing on Sunday.

“We’re switching it around a little bit to concentrate on clinics and a movie first and then focus on two iconic Crested Butte events, the Chainless World Championships and the Fat Tire 40,” explains Ochs.

Thursday, June 25
The festival opens Thursday with bike clinics sponsored by Griggs Orthopedics (gO) and led by Team gO athletes for anyone from beginners to expert riders. Yoga for the Peaceful will have classes throughout the day as well and Handlebar Bike shop will be leading a guided ride.

The first day closes with a movie night at the Majestic Theatre at 7 p.m. The chamber is soliciting short films related to mountain biking that are anywhere from three to five minutes long, no longer than eight minutes, to be shown on the big screen.

They already have three submissions and would like to get a total of 10 films in the line-up, with prizes going to the best films. You can contact them for submissions at events@cbchamber.com or swing a thumb drive by the chamber of commerce building at the Four-way Stop.

In addition, that will be the last chance to register for the Chainless World Championships. Registration is available online but if there’s any room left, the final spots will be sold at the movie night.

“I would encourage people to go online and register—it does sell out,” says Ochs.

Friday, June 26
More Yoga, a guided ride of Teocalli Ridge offered by the Alpineer and then one of two highlights from the week, the Chainless World Championships, take up day two of Crested Butte Bike Week.

As many as 300 people will line up at the top of Kebler Pass for the start of the Chainless race at 4:20 p.m. As mentioned before, registration is available online and you can pick up your number plate and zip ties at movie night Thursday or at the chamber building at the Four-way Stop on Friday, June 26 between 10 a.m. and 1 p.m.

That is also the time participants are required to drop off their bikes to get them shuttled to the top, or you can do it old-school and ride your bike to the top.

There has been some controversy over the past couple of years about people on tandems and/or mountain bikes taking the title. This year, in an effort to remain in the vein of the original chainless race days, the Chainless World Championship title will go to the first person to finish on a “townie.”

“It is a classic and historic event and we want to see all kinds of bikes out there,” explains Ochs, “but the winner must be on a townie. We want to make sure we’re staying true to our roots.”

For you spectators, the chamber and town are opening the entire 0-100 block of Elk Avenue to partying, responsibly of course. Oskar Blues will be selling their fine malted beverage product starting at 3 p.m. and you can purchase them and then grab your favorite spot to witness the sketchy turn from the gravel of old Kebler Pass Road onto the pavement of Elk Avenue.

There may be a kids’ chainless race from the top of Elk Avenue before the official race and live music playing before and after the race.

“We want to entertain the crowd and, for people coming out early, we want to hydrate them with the finest Oskar Blues beverages,” says Ochs.

Day two closes with an Oskar Blues Brewery beer tasting and dinner at the Coal Creek Grill starting at 7:30 p.m.

Saturday, June 27
Had enough? Better not have, because Saturday is when the suffering, I mean, fun really starts as Crested Butte Bike Week brings you the Fat Tire 40, starting in town at 8 a.m.

You’ve seen the movies, done the clinics, taken part in a guided ride and then rode down from the top of Kebler Pass and partied—now you can get on your bike and ride until you see stars, or at least watch other people do that.

While most modern day cross-country races involve two or three laps on a closed course and typically take place on a ski area, the Fat Tire 40 is a classic cross-country race that takes racers on a 40-mile tour of the trails around Crested Butte.

It all starts in town at Yelenik Pavilion in the Crested Butte Town Park at 8 a.m. Riders will head through town, including a coast down Elk Avenue before heading up Gothic Road, still in neutral start mode, until they pass the Washington Gulch Road turn, at which point the police car pulls off and it’s game-on.

The course will include the Upper and Upper Upper Loop, Strand and Deer Creek before coming back from the town of Gothic and turning onto the Evolution Bike Park to ride up Meander and down the West Side Trail, back to the Upper Loop and down Tony’s trail into town, with a couple more turns through town before finishing back at Yelenik Pavilion.

“We’d like to see people lining Elk Avenue to send the riders out on the race,” says Ochs.

Ochs expects the winners to complete the course in around four hours and, thanks to the Crested Butte Tourism Association, a total of $5,000 in cash will be handed out to the top five men and top five women in the open class. Ochs hopes the cash booty will boost participation in the race.

“The Fat Tire 40 has been hurting and we’re looking to ramp it up,” says Ochs.

Say you like to ride a long time but not that hard, jump into the annual Bridges of the Butte Townie Tour starting at noon on Saturday. The event is a 24-hour tour of town and is open to solo riders or teams and raises money for the Adaptive Sports Center. For information or to sign up go to www.adaptivesports.org.

“We’ve been riding it and it’s riding really well,” says Robertson. “It’s quite a bit faster than last year.”

As always, volunteers are needed for Crested Butte Bike Week, especially at the Chainless race and the Fat Tire 40. If you wish to help out contact the chamber at events@cbchamber.org. Additional information, detailed route maps and event registration can all be found at www.cbbikeweek.com or www.cbchamber.com.