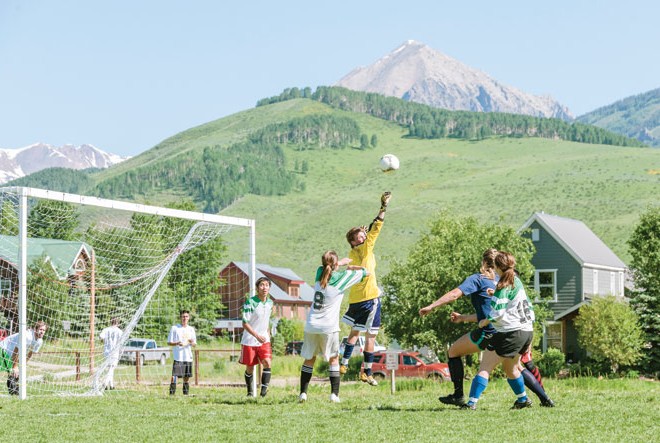 “I believe we will…

“I believe we will win.

“I believe we will win.

Turnout at pick-up soccer all June was top-notch with a talent level not seen in years. The youth movement was in place with several recent high school graduates and current collegiate players on the roster as well as a couple of savvy veterans and the best crew of women players to take the field in decades.

Topping off the stacked roster was a Brit and a rookie goalkeeper who exceeded everyone’s expectations in net to provide the one last key ingredient for success. To top it off, the team even had a manager/coach to help organize the chaos.

Things started off well for the Kickers Saturday morning as they opened the tournament against perennial tournament powerhouse Colorado Springs Casuals. The Casuals have a couple of tournament titles to their name and pull their players from an adult league and top-level Front Range club programs.

Manager Garrett McCafferty announced the starting line-up minutes prior to the game and the decision proved wise as the Kickers took immediate control of the game. With Prawit Durgan in back directing the defense and Sully Desai orchestrating the midfield, the Kickers established possession and dictated play for the initial 10 minutes of the game.

The Kickers stalled on offense as they struggled to find a cohesive nexus between possession and attack and McCafferty turned to his trusty managing tool to find a solution.

“I need my whiteboard,” exclaimed McCafferty.

As McCafferty drew out plans, erased them and then redrew additional plans, the Casuals gained steam. Fortunately, their counterattacks proved fruitless as Durgan, Allen Smith and Dana Shellhorn teamed up on the back line to shut off passing lanes and clear through-passes.

Effort paced the Kickers along for the remainder of the first half and with Bryce Koval and Cole Britton up top, the resulting work ethic provided the Kickers with their first clean look on net. Britton pressured the Casuals defense into a turnover and Koval was clear to net before he was dragged down, resulting in a penalty kick (PK) for the Kickers.

Desai converted on the ensuing PK and the Kickers carried a 1-0 lead into halftime.

Kickers rookie keeper Sam Reaman got his first big test five minutes into the second half as the officials awarded the Casuals a PK. Reaman denied the initial shot and then turned away the rebound to keep the Kickers’ lead intact and prove that he was no greenhorn between the pipes.

Unfortunately, the Casuals’ pressure paid off 10 minutes into the second half when a Kickers’ handball in the box resulted in a game-changing event. The offending player picked up his second yellow card for the handball and was therefore ejected, leaving the Kickers to finish the game a man down. Furthermore, the Casuals converted on the PK to tie the game.

Ryan Sullivan stepped in with Polly McGrane at midfield to try to lock things down, Hattie Ryan and Katie Redmond provided openings on the flanks and Graham Koval sparked some fireworks, running alone as a striker, but the Casuals managed to tack on two more goals as the game progressed to a 3-1 win.

“We had moments,” said McCafferty following the tough loss.

The Kickers returned to the pitch an hour later to face Steamboat in a battle of the ski towns. Crested Butte looked to build off the aforementioned “moments” from the first game but played far more rushed and down the middle to mount anything noteworthy. The bright spots came from Ellen Teague, daughter of former Kickers from back in the day, Isabel Waldman and Clare Charsley-Groffman, who dominated 50/50 challenges to keep the Kickers alive. Reaman remained stout in net, pulling off two huge saves in the first half to keep the game locked in a scoreless tie at halftime.