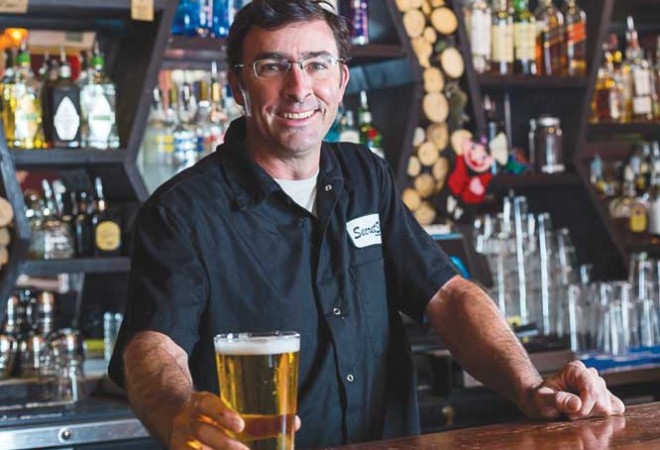 You don’t have to pay the dues to appreciate the blues, but Basile gets it. The Jersey boy holds the blues and the artists who create the music in high regard and he has an innate understanding of the genre.

As a long time KBUT DJ, Pete says he sometimes wonders himself why he chose blues, and solely blues, for his radio program, Luigi’s Blues Review, now seven years running (Friday mornings, 8 to 10).

“I’m a white kid from New Jersey,” he laughs. “Do I really feel the difficulties and angst of life like they do? How hard do I have it? I think maybe it’s more that you can really feel the angst and hardship of people who write and sing blues. If you’re listening to more popular music, the emotion doesn’t necessarily come through like it does in the blues,” he says. “I’ve always been blues-based in music, which most (modern) music is derived from.”

Pete’s very first radio program in 1989 was called Asleep at the Wheel, named so because it was an early bird 6 a.m. show and ran for four hours. It leaned more toward classic rock and blues, but Pete felt there was a need for a strictly blues show.

From all the positive responses people give him about the show, it’s apparent he was on to something everyone wanted.

You would think that after two and a half decades, most people would know the real Luigi’s identity but, Pete smiles, “To this day, people are still finding out that I’m Luigi. The name started off as a radio show I had at the time called Luigi’s Lunchbox,” yet another incarnation of his show whose name he had inadvertently tagged. Later he discovered “Luigi’s lunchbox” was also a Mafia code word for a case in which to carry a concealed weapon (like a machine gun in a violin case), back in the days when Italian crime families ruled the cities.

Luigi’s been doing his radio show since he first rolled into town, back when the KBUT studio was in the old bus garage. “I got into radio because it sounded like fun. I think I named the show and then came up with the Luigi voice. I never really had a heavy New Jersey accent,” Pete says in his native New Jersey accent. “When I first started doing the show, I’d do the introduction in that accent and then fall back into my voice but people encouraged me.”

Although he does have that East Coast Jersey accent, his on-air accent is most definitely heavily affected. Pete claims that he was never a performer, although he grew up playing piano and specifically loved ragtime, and he’s most definitely not an extrovert, so both the accent and the fact that it’s a radio show where he can’t be seen enhance his anonymity, because he’s basically a really shy guy.

“DJing is one of the highlights of my week. If I could translate that into making a living that would be cool,” Pete says, but he’s also thrilled to be part of the well-loved team of volunteer deejays of KBUT.

Pete arrived in Crested Butte by way of his college friends, who, he says, “were talking a big game about skiing, moving to a ski town, but then everyone bailed except one guy, and he wanted to move to Tahoe.”

Having visited a high school friend who was living in Breckenridge and who later moved to Crested Butte, Pete knew he was destined to live in Colorado. He grew up skiing Vermont’s Mad River Glen. “Mad River had the same feel as Crested Butte as far as narrow trails through trees, wildness, and certain areas you could hike to that were not known to everybody and not on the trail maps. I had just graduated from Boston College with a degree in philosophy. I was packed and ready to move to a ski town.”

Pete chose wisely and headed to Crested Butte. “I got into town at 8 p.m. Halloween night, just as it was beginning to happen. A band was playing at The Eldo and I didn’t have a costume and it was go time. I ended up being “and” in a cardboard canoe between Lewis “and” Clark. That night convinced me and I said to myself, I’m gonna like it here.”

It’s been 25 years since that Halloween night. “I didn’t think I’d be here that long,” Pete says with raised eyebrows and a wide grin.

“I realized when I turned 44 that I’d been here half my life!”

Pete’s done the usual shuffle of employment in town and at one time owned and operated The Eldo, from 1996 to 2001, with his partner Ted Bosler.

But to backtrack a bit, Pete originally hailed from Whippany, N.J., a suburban community. As the oldest of four boys, his father was a New York City stock trader and the only white-collar guy in his immigrant Italian family. Pete’s mom was a stay-at-home Irish mother. As a kid, Pete played little league baseball and soccer in junior high. His first job was in a bike shop, Whippany Cycle. “It was all BMX in those days. I was into bikes, not competitively—I built jumps. It was when I was working there that I bought my first mountain bike,” which gave him the love of mountain biking that he enjoys today, although these summer nights and days, he works as much as everybody else in town during the busy season so he hasn’t had much time for biking.

He does make time for his softball team, The Winehouse Monkeys. Most nights, you can find Pete tending bar at The Secret Stash.

As a blues hound of sorts, Pete tries to see as much live music as he can but admits, “It’s hard to give up four days of work and spend close to $800 for a weekend of getting out of town. You’re missing work and spending much money,” but he adds that he recently went to see Greg Allman at the Belly Up in Aspen. “That was sweet. The band was good, it was awesome.” He also went to the Tedeschi-Trucks Band show in Snowmass this summer. “Trucks is one of my all-time favorites, along with Eric Clapton,” Pete says.

He’s surprisingly good with the written word, even though he proclaims that he’s not much of a talker. Grammatical errors and the frequency with which they’re made, especially in the press, are justifiably annoying to him, so much so that he was recruited to help proofread local artist Lian Canty’s Alphabet Menagerie book, and he penned three of the poems for it (available at Townie Books on Elk Avenue).

“When pushed, I can write. It’s always been something that interested me but it became an assignment,” he says of his first contribution to a published book. “I really didn’t like school that much and writing has always felt like an assignment,” he confesses, but in actuality, he writes quite well. “I might actually enjoy it, if I put my mind to it,” he says, but adds somewhat jokingly that he doesn’t think he has the attention span to sit down and focus enough to actually do it. “In the future, I can see myself writing, maybe contributing to different publications or even the Crested Butte News… observations, essays, editorials,” and with his keen eye for grammar, he may just have a future in proofreading.

“I can also see myself doing Mark Twain sort of stuff. His sense of humor resonates with me. Short stories is what I have the attention span for,” he grins. He thinks he was tested for ADD at one time in school, and being a bartender probably isn’t helping.

“In the future, I don’t know how I see myself, that’s the whole problem,” he laughs of his general philosophy so far of floating through life. Pete seems to be enjoying it to the max. He’s pretty proud of his contribution to Lian’s book. “It made me realize that I can do it but I need someone to prod it out of me.”

He’s still an avid skier, and that was the main reason he moved out here, but he knows now that’s secondary to just being here, in a community. “Just the kind of people a place like this attracts. I enjoy being in the mountains and the climate’s great. It beats the heat, that’s for sure. The plan is to stay here the rest of my life. I’m just not sure how that’s gonna happen yet,” Pete says with a chuckle.

Share
Previous CB Council grappling with backcountry ramifications
Next School’s out for summer…or is it?