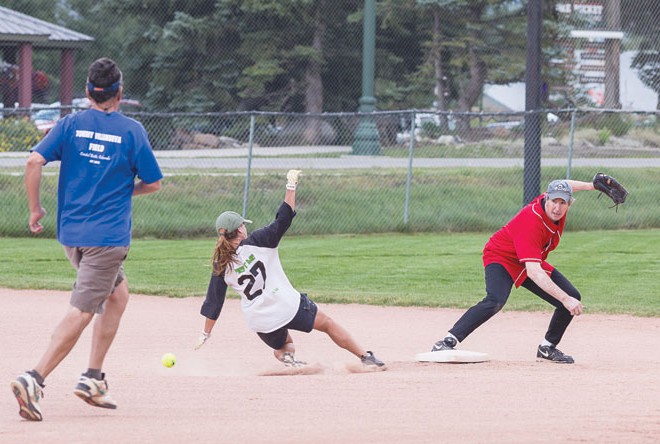 I laughed, I cried, I hugged myself as the Crested Butte competitive league came to a climactic finish Monday night at Gothic Field.

It was an interesting season to say the least. With just four teams in the comp league playing two times a week from June until now, there was a lot of overlap. And while most games lacked in sustained stoke, they saved the best for last as the Talk of the Town and the Rent-A-Gades battled back and forth all seven innings in the comp league championship game before it came down to one mighty swing from Crested Butte’s own version of the “Splendid Splinter.”

The weather was unsettled to start, and the likelihood of the finals even playing looked dubious. Furthermore, thanks to the local league’s double-elimination format, I was sure I’d be there for at least four hours as the Talk needed only one win to get it done, but the Rent-A-Gades were on a mission for a repeat title.

The Rent-A-Gades jumped out 2-0 early on with a walk and a base hit from Heather Duryea and a two-RBI double from Nick Velasco, only to immediately fall behind as the Talk answered back in the bottom of the first.

Bruce Winchenbach tripled and scored on a base hit from Kelly McGuire, Tom Consentino singled and Eric Ervin pushed three runs in with a triple turned error-assisted three-run inside-the-park-home-run for a 4-2 Talk lead.

But the Rent-A-Gade women led the charge in the top of the second to tie the game up as Kari Roberts, Erica Canada and Emily Ocanas connected for three base hits to drive in two runs.

The Talk jumped back on top as the father/daughter duo of Dave and Ali McGuire connected for base hits and then scored when Winchenbach walked. Kelly, the matriarch of the McGuire clan, added a third run with a sac fly RBI to put the Talk up 7-4.

The Rent-A-Gades then proceeded to go on an 11-1 scoring run over the next two innings. They opened the rally in the top of the fourth as Jeff Snyder and Gerry Heal drove in three runs on base hits.

Then the rally of all rallies… so far… came in the top of the fifth inning. After Jeff Banford and Duryea grounded out to start things off on the entirely wrong foot, the Rent-A-Gades went on a two-out, seven-run charge.

Josh Schumacher started it with a bloop double and scored on a base hit from Leah Fisher down the leftfield line. Velasco then crushed a two-run dinger over center, Andrea Schumacher and Nick Catmur connected for additional base hits and Roberts drove them home with a two-RBI single. Canada and Heal capped the rally with RBI base hits and the Rent-A-Gades were sitting on a 15-8 lead heading into the bottom of the fifth inning.

Again, thanks to the double-elimination format, the Talk had a game to give up and could have just caved and let the first game go. Instead, they climbed back into the game with their own two-out rally. Ervin pushed the first run home with a double, Lauren Alkire followed with another RBI double and the McGuire father/daughter combo came through once again with back-to-back RBI base hits to pull the Talk back within three.

The Rent-A-Gades tried once more to land the knockout punch, rebuilding a six-run lead in the top of the sixth inning. Josh had struggled all game to find his power swing, most likely due to Dave McGuire’s mastery on the mound, but discovered it when needed most, cracking an RBI triple high off the netting in left field. Velasco followed with an RBI double and Andrea tapped an RBI single to put the Rent-A-Gades on top, after a relatively quiet bottom of the sixth inning, 18-13 heading into the bottom of the seventh.

That would be it, or so I thought. The Talk could give up, regroup and then make another push for the title in the second game. But the Talk of the Town has a legacy to uphold. For years, drinkers at the Talk have refused to give up and that spirit spills over onto their softball team.

Brent Laney opened the comeback with an RBI single to center. Molly Keating slapped an opposite-field RBI single to right and when Winchenbach walked, another run scored to pull the Talk within two runs of the Rent-A-Gades, three runs away from the title.

Kelly McGuire drove another Talk run home with a sacrifice hit and the stage was set for some serious heroics as Consentino ambled to the plate with two outs, one runner on and down one run. After a couple of pitches, including a foul ball, Consentino zeroed in on the next pitch and drove the game-winning two-run home run high over the centerfield fence, bringing the Talk of the Town the 2015 comp league title.