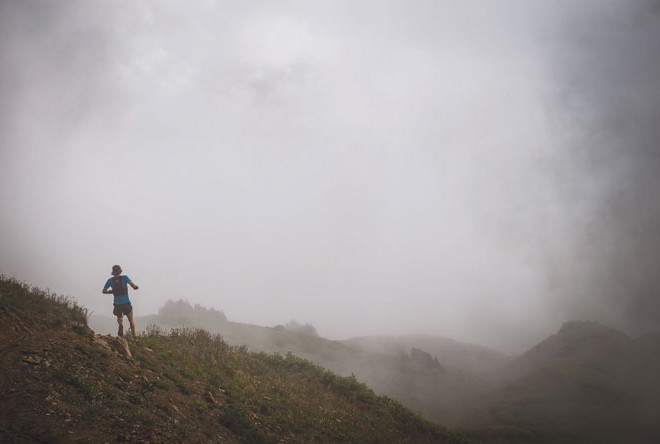 The local women held their own in the bike race as Amy Beisel won the women’s summer GT bike race, with Jenny Smith in second place. Brian Smith had the top finish among local men, taking second place.

Last year, the Gore-Tex Grand Traverse expanded the race “brand” to include a summer version of the famed winter ski race from Crested Butte to Aspen. Racers lined up to either run or bike from Crested Butte to Aspen following the winter route, give or take a couple diversions, but still reaching that 40-mile goal in the inaugural Gore-Tex Grand Traverse Mountain Run & Bike, a.k.a. the summer GT.

Given the success, and some feedback about the first event race, organizers upped the ante to turn it into a two-day event for this year. The thought was to give athletes the chance to run from Crested Butte to Aspen one day and then turn around and bike from Aspen to Crested Butte the next. Or, to do one or the other, or to have one person run and the other bike in a team format, or to have teams of two do one, the other, or both.

Basically, there was something for almost everyone, provided you had a strong set of lungs and legs and the mind space to do it.

It also opened up the door to crown the first Grand Traverse Triple Crown title to the individual with the lowest combined time between the ski, run and bike races.

The first Triple Crown title goes to Crested Butte’s own Ben Johnson. Johnson put down the fastest combined time between all three races, edging out Billy Laird by a mere six minutes. Though Laird won the unofficial quadrathlon title competing in the ski race this past March, the running race on Saturday, heading to a Taylor Swift concert with his family Saturday night in Denver and then driving back to Aspen to compete in the bike race on Sunday.

Mike Mcauley finished third in the Triple Crown but was the top dual sport finisher of the weekend, taking sixth in the run and fourth on his bike. Upon finishing the bike race he said that without question, running down Aspen Mountain was the toughest part of all three races.

The second annual summer GT, in its expanded format, kicked off at 6 a.m. Saturday with 115 runners bound for Aspen. Race reports included slimy conditions, comfortable temperatures and a long, tough descent down Aspen Mountain to the finish line. When all was said and done, 99 runners finished, with Brendan Trimboli of Durango winning the men’s race in a time of 6:25:01 and Kerrie Bruxvoort setting a new women’s record time of 7:43:48.

Bruxvoort and Trimboli also took home the King and Queen of the Mountain titles, making for a $1,000 payday for each of them.

Smith led the charge up Aspen Mountain to top out first and take the King of the Mountain title but could not hold off young gun Durangoite Payson Mcelveen, who eventually took the lead to edge out a six-minute win over Smith, covering the 40-mile course in a time of four hours, 17 minutes and five seconds.

Beisel led from start to finish, reaching the top of Aspen Mountain first for the Queen of the Mountain title and holding that spot the entire way, finishing in a time of five hours, six minutes and 12 seconds, with Smith crossing the finish eight minutes later.

Riders then started pouring across the finish line at the base of Crested Butte Mountain Resort with their fair share of mud splattered on them from head to toe as the Trail 400 descent was described as “slimy,” with plenty of mud to go around. A handful of riders found themselves at the top of the 400 descent with one if not both brakes non-functioning, some of them using a foot to slow down their rear wheel as they slid their way down the trail.

Rumors spread throughout the racecourse that close to half of the field was not going to make the first time cutoff at Taylor Pass. Fortunately, most did, as 76 riders finished the race, with the final riders crossing the finish after spending more than eight hours in the saddle.

“Harder than Leadville,” commented one of the final finishers.

“Harder than the Ironman,” said another.