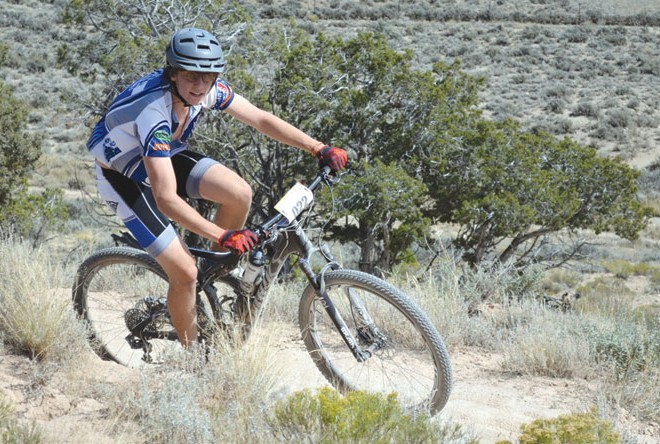 Prepping for conference finals this weekend

The Crested Butte high school mountain bike team held steady over their last race on Sunday, September 27 in Eagle, as most riders posted similar results or climbed up a couple of spots to keep the team in third place in the overall conference standings.

The course in Eagle is the same venue used for the state championships and offers quality singletrack with an exciting, high-speed downhill finish, complete with bermed turns.

Unfortunately, the recent spate of dry weather and the races the day before had wreaked havoc on the course when it was time for Crested Butte to race.

“The course was pretty torn up and the downhill berms were beat up and trickier,” says coach Torrey Carroll.

In addition, race day temperatures were hovering in the high 80s, which felt much more oppressive as the race day wore on.

“It was 86 degrees but it felt like 100 on certain parts of the course,” says Carroll.

Nine riders carried the Crested Butte colors to Eagle with some pretty simple goals in mind, as they were looking to stay in the running for the overall podium spot with conference finals on the horizon.

“We wanted them to move up or at least stay consistent,” says Carroll. “Overall, it was a good weekend.”

Kai Sherman continues to battle his way among the top varsity riders in the southern conference, posting another ninth-place finish after four laps of intense racing.

“Top ten is definitely impressive in the varsity class,” says Carroll. “He has good endurance and stayed strong through all four laps. I think he had a great race.”

Will Johnson continues to have a rough time in the JV races, placing 65th in Eagle. While Johnson is a solid rider, he missed the first race of the season and therefore must start at the back of the pack of a huge field of riders due to his overall ranking every time he lines up.

“He’s a strong rider. It’s just a bummer when you miss the first race and there weren’t a lot of passing chances on the course in Eagle,” says Carroll.

Meanwhile, sophomore racer James Bivens posted his best result of the season at the Eagle event. He opened the season with a third-place finish and took eighth place in his second race, then dropped the hammer in Eagle to pass a rider on the final stretch to the finish and take second place.

“His strength has always been bike handling and descending but he did more cross-country riding over the summer and now he’s got some fitness,” says Carroll. “He’s got the motivation to suffer and be at the front of the race.”

Ian Eldridge continues to battle his way back from a mid-season illness but appears to be back on track, posting a 13th-place finish in the sophomore race.

The freshmen racers all posted top 20 results in their class, led by Liam Elliott in 10th place. Elliott charged off the start and had to ease off a bit on the second lap but is poised to move up with more races.

“He may have gone out a little too hard on the first lap but with some pacing he could move up,” says Carroll.

The team held onto third place in the team standings with their effort in Eagle but fourth place is not far behind as they head into the conference finals in Nathrop this weekend. The course in Nathrop is relatively flat so Carroll and his coaching staff are in the midst of preparing the team accordingly in an effort to hold onto their podium spot.

“We’re working on riding hard in flats and false flats,” says Carroll. “The team behind us is pretty darn close but if we have a really good weekend, we could hold onto third.”