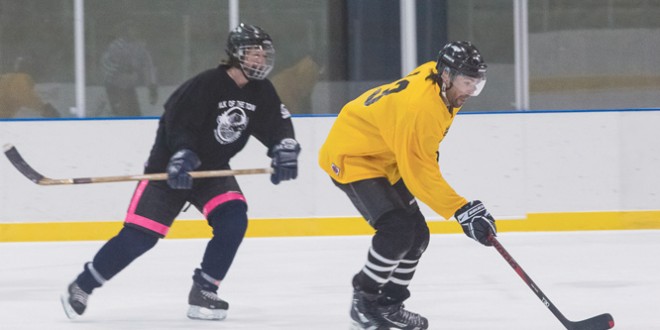 Talk of the Town edges out win over HCCM

With temperatures dipping to -10 degrees Fahrenheit and only one goalie suited up, there was no telling what kind of game was on tap Tuesday night when High Country Capital Management (HCCM) faced the Talk of the Town at Big Mine Ice Arena.

While the Talk appeared fully in tact with a complete bench and Montana Wiggins in net, HCCM players trickled onto the ice prior to the game with no goalie in sight. By the time the horn sounded signaling the start of the game, HCCM players took to the ice with still no goalie and opted to skate six and hope for the best.

I’m not sure if it was pure sportsmanship or just a lack of interest playing against a team with no goalie, but the Talk proceeded to slide their way through the opening minutes of the game as HCCM set the pace led by the high-flying Alex Albers.

HCCM team “owner” Jason Napoli opted to make the sacrifice for the team to step between the pipes and was finally ready and in net two minutes into the game.

Nevertheless, HCCM continued to push the pace and took full advantage of a face off in the Talk zone as Mark Sawyer won the draw and slipped the puck to Will Dujardin in the slot for the first strike of the game and a 1-0 HCCM lead.

The goal woke the Talk up like a shot of Goldschlager used to prime the pumps of many a Talk regular in the early 2000s and they started finding their groove. Molly Keating led the way with hustle up and down the ice slicing through the neutral zone and the shift in gears paid off as a centering pass found Nicholas Koukoutsakis alone and he punched it past Napoli to tie the game heading into the second period.

Billy Watson continued to do what any respectable former college player would do, work to set up his Talk teammates for chances on net. But their shots continued to miss the mark and Napoli was stout in goal, protecting the net like your assets in a volatile market-based economy, whatever that means. I’m still trying to figure out what to do with all of my Bit coins and these random dividend checks I get for 37 cents from stocks transferred to me when my father passed away. Still haven’t heard from the Nigerian man after I transferred $6,000 to an account to help “free up the 1.5 millions of dollars that is curently tied up in the banks. Please tahnk you.”

Nevertheless, HCCM managed to hold off the initial Talk assault and countered several times, finally breaking through once again in the eighth minute of the second period. After winning another face off in the Talk zone, the puck squirted out to the point for a massive slap shot. Wiggins made the initial save, a melee ensued and Sioux Emery capitalized on the confusion to poke the puck past Wiggins for a 2-1 HCCM lead.

Thomas McClean had been wreaking havoc for the Talk for two periods and kept it up in the third and finally earned his just reward. McClean carried the puck through neutral ice and into the HCCM zone before cutting across the high slot to pick the low corner through traffic, tying the game up once again in the second minute of the third period.

The two teams then proceeded to trade off taking turns at rushes onto the net but to no avail until the Talk capitalized on some HCCM confusion. As the HCCM defense appeared to lose sight of the puck, Koukoustakis picked it up just inside the blue line and found McClean crashing forward with a pass. McClean wasted little time in firing off his shot, slipping it just inside the far post for a 3-2 lead.

A Talk penalty gave HCCM a power play for two of the final three minutes but the Talk circled the wagons to protect their net and cleared the puck of any threat on net to seal the 3-2 win.