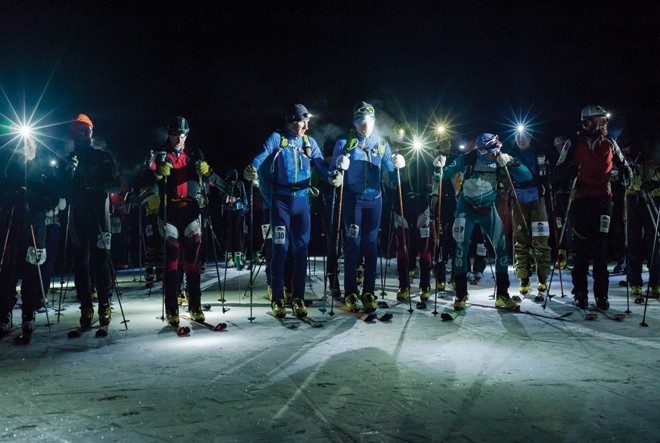 “I don’t know what’s going on this winter but seeing that I was born in 1964, I’ll certainly take it”

It’s a tour. Wait. It’s a race. Well, it’s sort of both. It’s a fast-paced 22-mile tour with 5,000 vertical feet of climbing and in the end Alpineer/Dynafit/Big B’s athlete Pat O’Neill edged out a two second win over Team Alpineer Grand Traverse partner Robert Woerne, covering the course in a time of three hours, 47 minutes and 58 seconds. Rhett Griggs finished third among the men.

Kelly Ryan won the women’s race in a time of four hours, 36 minutes and 36 seconds, followed by Hannah Smith in second place and Brynn O’Connell in third.

At that point racers headed into the high country, climbing to the end of the Washington Gulch drainage and across it before dropping into the Slate River drainage to Pittsburgh and finishing at the Magic Meadows yurt.

It was the biggest turnout ever for the GMT with 83 skiers lining up for the 6 a.m. start on Saturday, February 20. While it appeared the weather would be perfect for the race, the event wasn’t without its mishaps.

In the past, the course took skiers on a brief tour of the Upper Loop area before dumping them out onto Hunter Hill Road for some running to the base area. This year, the course peeled off higher to a stretch of trail called the Happy Hour Trail, cutting across the bottom of the Banana on Crested Butte Mountain before returning to the usual course configuration.

“I think getting rid of the Hunter Hill pavement made the course much more aesthetic,” says Crested Butte Nordic director of marketing and development Drew Holbrook.

“I liked the course when they changed it four years ago,” adds O’Neill. “The Happy Hour trail addition was great.”

Unfortunately, a lead group of Brian Smith, Sean Van Horn and Cameron Smith missed the turn for the Happy Hour trail in the early morning darkness and followed the old course to Hunter Hill Road, eventually resulting in their getting disqualified.

The early morning snafu by the lead group had O’Neill and Woerne a bit perplexed.

“When we were heading up toward the avalauncher on the Happy Hour trail I wasn’t seeing any pole basket marks,” explains O’Neill. “When we got down to the bottom of the West Wall Lift I couldn’t see anybody, I was totally confused. I just turned to Bob and said, ‘Let’s ski this tour and see what happens.’”

Share
Previous Wolverines cruise to a couple of wins over the Foothills Flyers
Next Community Calendar: Thursday, February 25–Wednesday, March 2