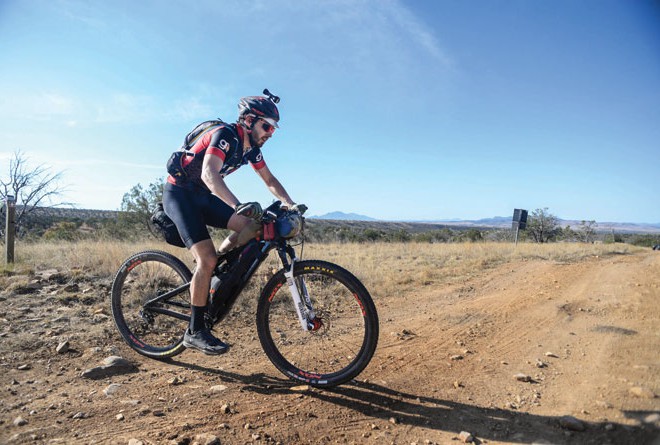 Carries bike into and back out of the Grand Canyon

Team Griggs Orthopedics rider Neil Beltchenko is back at it. This time, he decided to take on the Arizona Trail Race (ATR), a self-supported bike race, a.k.a. bike packing, crossing the state of Arizona from south to north. Beltchenko covered the 750 mile–long course in a time of six days, 12 hours and 28 minutes for the win and set a new course record in the process.

Beltchenko is no stranger to races like this. Last summer he committed himself to the mother of all bike packing races, the Tour Divide, covering the 2,745 miles, and 200,000 vertical feet of climbing, in a time of 14 days, 12 hours and 22 minutes, to finish in third place.

Beltchenko also has a couple of Colorado Trail Races under his belt, winning it two years ago, and he had competed in the shorter version of the ATR before, but this was his first foray into the full course.

“There’s a small group of bike packers who have coined doing the Colorado Trail race the Tour Divide and the Arizona Trail Race as the triple-crown,” explains Beltchenko. “So it was kind of a no-brainer for me to finish off the triple-crown.”

Each one of the aforementioned races is a bit different and the ATR has its own challenges unique to the course.

So much so that Beltchenko had extended stretches where he had to stay out of the saddle, stand up and mash on the pedals.

“My butt was so chafed that I didn’t want to sit down,” says Beltchenko.

Then, there’s the Grand Canyon.

“No wheels are allowed to touch the inside of the Grand Canyon,” explains Beltchenko. “You have to strap your bike to your back.”

On the fifth day of his race, Beltchenko hit the south rim of the Grand Canyon, strapped his bike to a makeshift backpack on his back and proceeded to hike for 21 miles down the south Kaibab Trail and then up the north Kaibab Trail.

“It’s horrible,” says Beltchenko.” Forty-five pounds of horribleness on my back and trying not to hit your wheel on a rock and fall off a cliff and die. It was treacherous for me.”

Beltchenko dropped in to the canyon at 7 p.m. and emerged the next morning at 11 a.m., tossing his bike to the ground to take a break. Unfortunately, the bugs had hatched and his respite was short lived.

“I just threw my bike off of me, it was the best feeling in the world,” says Beltchenko. “But the bugs were out and that really sucked because I couldn’t just lay there and relax.”

Other than that, Beltchenko’s race was relatively smooth. He averaged around three hours of sleep a night, temperatures in the desert sections never reached oppressive levels and he maintained a pace that kept him anywhere from five to seven hours ahead of the previous record time.

Beltchenko points out that the ATR course does demand some more serious preparation for water sources but his food intake was similar to other races. The list included gummy worms, nuts, toffee-covered nuts, burgers, milkshakes and three stops at McDonald’s throughout the race. In fact, Beltchenko spent a total of $81.30 over the three stops, peaking with a $44 dollar stop at a McDonald’s in Tusayan, Ariz.

Furthermore, both he and his bike survived the rugged course without a single major issue, no injuries and not a single flat tire.

“I usually get nagging injuries and I didn’t get any of those and I was mentally prepared for this race more than ever before,” says Beltchenko. “Luckily I didn’t get any flats. I put in way more Stan’s than I usually do.”

Following his return to society and some rest, Beltchenko has plans to jump into several local races this summer, including the Growler and the Fat Tire 40. Following those he will return to the Colorado Trail Race in the end of July gunning to set a new course record from Denver to Durango.

“Hopefully I can shave off some time,” says Beltchenko.

After that he hopes to return to the Tour Divide next summer and may jump into the Trans Nevada Race and ultimately he may jump in on the Trans Am Bike Race, a self-supported bike race across the entire country.