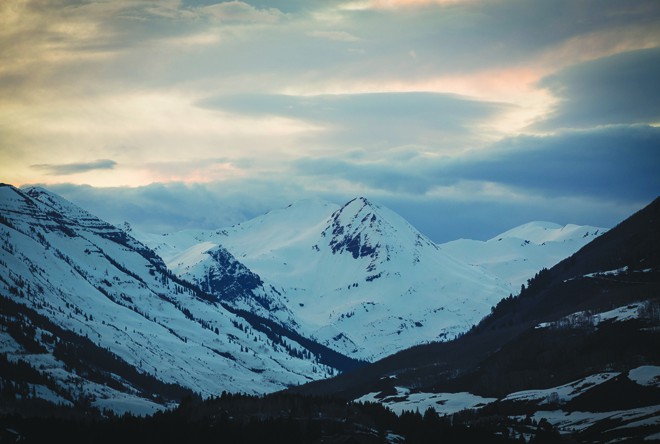 It is off-season. And while not at all good for general business, it is a great few weeks in the village for mental health. The pace is slow, the conversations longer and the hand waves more plentiful. Sort of like the new electric vehicle charging station at the Four-way, spring is a time for all of us to recharge and reboot.

For those who didn’t leave the upper valley when the ski resort shut down the lifts, most of us pray for sunshine and not much more snow. We’ve been somewhat lucky thus far but the forecast doesn’t look promising for the coming weekend—unless you like backcountry powder. And having hit Red Lady on a corn search last week, there is something to be said for spring skiing. And spring biking. And spring in general.

This week in particular has been really quiet. The Crested Butte Community School spring break corresponds with the week after the ski area closes so ski bums and families alike head out of town. I would guess 99 percent head south. Smart people. Looking at social media, it appears this year that Mexico, Costa Rica and Sedona are favorites. When the weather turns a bit chilly at 9,000 feet and Hartman’s looks wet, the Crested Butte stragglers vacation vicariously beneath the palm fronds of the beaches and along the red dirt trails of the Southwest that show up on the computer screens.

Resort residents understand the rhythm of how to spend the immediate days after the ski season closes. Filling in the weird winter tan lines, embracing some heat (anything above 50 degrees), and relishing the water that started as snow in the front yard but is now a spring desert creek or a wave in the ocean. Life on social media, as can be expected, is almost always good.

There is the social media opportunity for outcry along with the Instagrams of blue skies and smiling kids. There are Facebook pages like “Crested Butte Housing Crisis” that seem to get a new post every couple of hours these days. People desperately ISO a place to live this summer since their current place is being sold. There are people offering rooms for rent at twice the rate of a few years ago or places in Almont for $800/month. It’s the same with the “Crested Butte Rentals and Roommates” page. There is a ton of people looking for a summer roof over their head. There are folks wanting to move here from the city looking for the relaxing mountain town vibe and willing to pay bank. They must be coming with money instead of counting on a job to pay the bills. I saw one post from someone ISO a roommate in Crested Butte South for the month of April. Good luck.

As an aside, it is rough out there right now but the town of Crested Butte has a few deadlines coming up dealing with potential affordable housing. Take a look at the story on page 1 of this week’s paper.

Then there’s the Gunnison Marketplace. That’s where a single mother might be selling her platypus to buy medicine for the cat. You can pick up a wonderful VHS collection for $5, some “Vail Sucks” stickers for $4 or see pictures of a tick on a person’s ear. Really. Love that always interesting site.

Should we even go into Crested Butte Bitch and Moan? There you can read about Christmas lights that never come down, cows on the public land, fat bikes, guns and weed.

Anyway, while a few minutes a day checking in on social media is addictive, it might be better to get outside as the snow recedes, the sun shines and people slow down. That way you can communicate directly with your neighbors and friends instead of just putting a Smiley Face emoticon under their picture of a burrito and margarita. An afternoon bench session on Elk or sitting outside on a deck with a beer is pretty smiley in itself in April and May. It is sort of the human equivalent of the electric car recharging station. Plus it is actually “social” and not just social media.