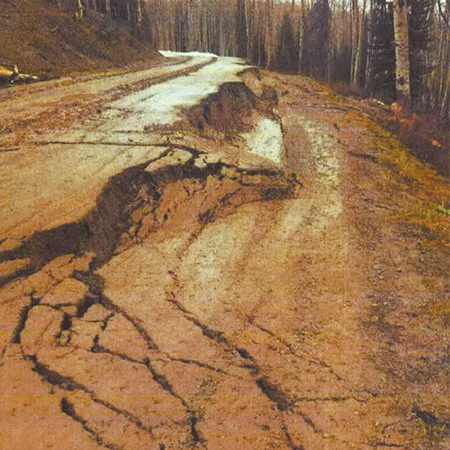 Kebler to fully open in early June, Cottonwood ready by this weekend

The opening of the nearby mountain passes is always one of the first signs that the summer season is close. Traditionally, Kebler and Cottonwood Pass roads open Memorial Day weekend and while that will hold true this year, there is a big twist…or slump.

Kebler Pass itself will be open to traffic from Crested Butte starting Thursday, May 26, but vehicles will not be able to make the trek over to the North Fork. Because of a major slump in the road traffic will be closed at the Lost Lake turn-off.

The slump is approximately 350 feet in length and has a four-foot drop from the end of the remaining road. The remaining section of road is less than 12 feet wide.

“The geotechnical engineer examined the site and we will be doing some monitoring to make sure it is no longer moving,” Crosby said. “He thinks it might just be a spring event and not a continuing slide.”

“Once we determine it’s no longer moving, we can begin work to repair the damage so we can get the road open. Hopefully it will be repaired and the road open sometime in early June,” Crosby said.

Cottonwood Pass above Taylor Park Reservoir is scheduled to be open to traffic this weekend. Crosby said traffic should be cleared for the connection to Buena Vista by about 4 o’clock on Thursday, May 26. The county is warning travellers to expect “wet, muddy spring conditions. Four-wheel drive is recommended.”

Meanwhile, the road to Gothic is slowly opening. Crosby said the gate on the Gothic Road at the town boundary of Mt. Crested Butte would be opened late Thursday evening. But “extensive road work” between Mt. CB and the Townsite of Gothic is planned for the week after Memorial Day.

“The road between Mt. CB and Gothic will be closed between May 31 and June 3 daily from 8:30 a.m. to 4 p.m. for culvert installations and cattle guard replacement,” she said. “The road will be closed during the day to all traffic except emergency response vehicles.”

Welcome to spring in the mountains.

Kinks still being worked out with CB parking program

Summer configuration of Elk Ave the culprit? [ by Mark Reaman ] The new parking …