Irby explains, “We let the little kids under 50 pounds ride the sheep, no saddle, they just get on and grab a hold of the wool and off they go.” Kids from three to about 10 years old can participate in the event, and sometimes, it whets their appetite for riding for the bigger prize when they get old enough to load onto a horse or bull. 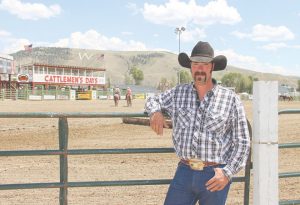 “They’ll get flat trampled,” Jackson says about the young sheep riders. “We had one, he held on so long that the sheep dragged him all the way around the pen.” He says that TETWP rewards every one of those little wanna-be buckaroos, about thirty kids, with a pair of pint sized spurs and a pink bandana.

Jackson is a fourth-generation Gunnison rancher. His great grandfather, Bernard Irby, came to Gunnison seeking employment. Jackson says, “When he got old enough to go make some money, he got on his horse and left.”

Bernard found a rancher in Iola to work for, before the town was claimed to create Blue Mesa Reservoir. “He was walking up Main Street in Gunnison one day and this guy said, ‘Hey, I like how you walk, wanna come work for me?’ and that’s how great grandpa got moved to Sargents. Then, when the rancher’s health got bad, great grandpa bought the ranch from him in 1942. My grandfather, Charles, was born on that ranch, and when he got back from the WWII, he moved down the highway and bought another ranch and my great grandpa and grandpa ran it together.”

Irby’s uncle, aunt and father were all born on that ranch and when his father, Dale, was old enough, he became part owner of the ranch, later buying and moving to a ranch in Doyleville. Jackson and his brother grew up on the Doyleville ranch, where Jackson, his dad and an uncle, Stan, still live and work. They run a cow-calf operation of 550 Black Baldy angus and after calving, the herd increases to about 1,000. Jackson recalls that his mom, Wendy Sherman, “had all the chores of a ranch mom, including chasing me and my brother around.”

Jackson rode the bus to school every day and went to both Lake and Blackstock elementary schools. He finished seventh grade at the old Ruland and went to the new school when Ruland Junior High was closed for demolition.

Jackson had the usual chores growing up on a ranch. “We helped as soon as we could. I started driving a tractor when I was 10, helped with irrigating, branding and moving cows.” There wasn’t really too much time for play. When they did get some time, “We ran around on our ATVs when we weren’t old enough to run the equipment.”

He competed through his senior year when he sustained serious injuries. “We were entered into the Cortez rodeo and I got bucked off and I come off the horse the wrong way and my hand got stuck in the rigging. The pick-up riders couldn’t get to me in time; my leg slid under the horse and he stepped on me, shattered the bone in my leg, and pulled the ligaments in my arm. I can remember it like it was yesterday because all I could do was lie in bed.” The only thing on TV at that time was the endless coverage of the events of September 11, 2001. “I was recuperating for a year, with a rod in my leg to more or less hold my foot on.”

He graduated the following year in 2002 and headed off to Wyoming Tech to become a certified diesel mechanic. “I still worked on the ranch with my dad when they needed extra help for haying and calving. I worked for the Ford garage but I got tired of being stuck inside a shop. I mainly just work on the haying equipment on the ranch now and I’m full-time on the ranch, sharing duties with dad and Uncle Stan. I never wanted to do anything besides ranching,” he says, although he drove a big truck over the road for a while.

“I guess it’s just what I grew up with and that’s what I knew. I do love it,” he says. “Honestly, the most important thing I love about it is that it’s different every day. For example, as a mechanic, I was always working on an engine but in ranching, you wake up every day doing something different. I’m either chasing water or moving cows, working fence, calving, haying or branding. You never do the same thing twice in a row.”

Jackson and his family start work at 7 a.m., and he says that ending the day “just depends on when the projects are done, and when they’re done, then we’re done and on to the next one. We only get one cut of hay,” he says of the Gunnison Valley’s short haying season, “and it’ll be another three weeks before we start. It takes us up to 20 days and sometimes up to three months to finish. It honestly depends on the weather.”

Calving starts in April and they’re usually done by June when the approximately 500 calves are born. “We take the calves up high to BLM and forest land to put them on in the summer. We run a lot up in Needle Creek,” he explains.

Jackson met his sweetheart, Cody DeFoe, at the park in Gunnison, which, he says, was the high school hang-out at the time in 2002 when her family moved up from Longmont, Colo. They married in December 2005 and have two daughters, 11-year-old Teara-Rose and Jayden, who is 10. Both are following in their dad’s footsteps—he also showed horses, pigs and steers as a 4H kid. The 4H girls are showing their pigs during this Cattlemen’s Days.

When asked if he ever gets to take a vacation, Jackson laughs heartily and responds, “I had to think what a vacation is. I do get away but not necessarily for vacation, generally it’s for work,” and he explains that he’s also the Gunnison District brand inspector.

Yes, there are still cattle rustlers and, at least in Texas, hanging is still on the law books for those scoundrels who get caught. However, in Gunnison, the marshals are brought in to deal with the thieves.

“Right now we’ve got a lot of outside cattle from, like, Montrose, Olathe, and a few bunches out of Oklahoma. I’ve got a variety of different-owned cattle up here and I make sure that everyone stays straight and there’s not any cattle rustling. Your brand is registered in your name so it’s like signing your document. We caught rustlers when I first started in 2003.”

He explains that the cattle weren’t actually stolen from anyone up here but they found them in Gunnison. The rustler “was wanted for rustling so I had the sheriff arrest him.”

To don the honorable title of brand inspector, Jackson says he had to take a battery of tests. “It’s all in the practice. You had to know so many different breeds of each species and you had to pretty much be good with math,” he says. “It’s not necessarily that you’re certified but if you pass all the tests then they hire you.

Jackson is currently the second vice president of the Cattlemen’s Days Association, but he’s been on the board since he was 16 years old and since then, he’s been involved with every aspect of the association, rodeo and events, except for being a competitive rider. He never was able to compete in a rodeo again after his high school accident, but he did help those little tikes onto the sheep to get them started in their “mutton bustin’.”

The Irby’s Doyleville ranch, along with the other two ranches in Sargents, is still a family-run operation. They all live on the ranch, in separate houses. “We see each other every day. Grandpa’s more or less retired and all the ranches are combined now, great-grandpa’s and granddaddy’s,” and most remarkably, it’s just three of them running all those cattle and doing all the work that must be done—Jackson, his father and his Uncle Stan.

“Just the three of us take care of a lot of acres and a lot of cows. We hay somewhere around 3,000 acres. The girls, my daughters, come and ride with me and my youngest is pretty much in my back pocket all the time. I see my girls taking over the family tradition and taking over every aspect of ranching and carrying on the ranching heritage.”

Jackson feels pretty blessed to be a rancher, despite the long days and never-ending chores. “It’s kinda like I tell my kids, we consider ourselves millionaires because we have beautiful land, and everything and everyone is healthy. The sunrises and sunsets are not taken for granted ever,” he says of the serenity and beauty mixed in with the hard work it takes to run a ranch.