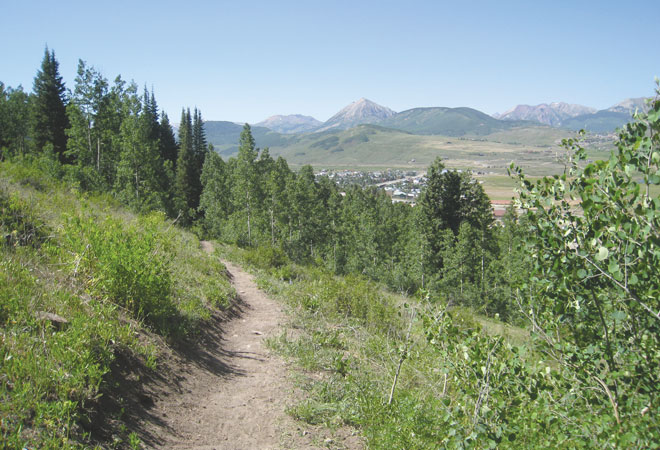 “It helps us celebrate our heritage, our backyard, our wild places”

One of Crested Butte’s newest completed trail loops is quickly becoming one of the area’s most popular backcountry experiences. The Baxter Gulch Trail—located just south of Crested Butte and providing access to Whetstone Mountain—has been a priority for the town since 1993, according to Michael Yerman, Crested Butte community development director.

The project endured through multiple generations of town employees, 15 years of easement negotiations and eight years of construction. On August 2, the grand opening will celebrate the legacy of hard work characteristic of the Crested Butte community.

Join the people who made Baxter Gulch trail a reality on August 2 at noon for a BBQ at the Baxter Gulch trailhead, a party 25 years in the making (so it’ll be a good one). After so many years, there are numerous parties involved in the project, including the town of Crested Butte, the Crested Butte Land Trust, CBMBA, CBCC, 1% For Open Space, the U.S.F.S., private property owners and countless others.

The trailhead is less than a mile south of town, located next to the county shop. The six-mile Baxter Gulch trail connects to the Carbon trail and Green Lake trail, and passes through four easements across private property.

According to Crested Butte Mountain Bike Association (CBMBA) executive director Dave Ochs, “The trail stinks of Crested Butte. It’s a mountain bike ride.” The 12.5-mile loop goes up 2,500 feet in elevation, which Ochs describes as a way to “get up and get out of town.”

But we’re getting ahead of ourselves. The Baxter Gulch trail, which accounts for six miles of the loop, was a massive accomplishment that involved the determination, vision and grit of countless volunteers, government employees, and non-profits. The story of the trail echoes the mountain biking and outdoor culture in the valley.

In the late 1980s and early 1990s, through a series of events, access to Whetstone Mountain from Crested Butte became restricted, and trails that were “as popular as the Lower Loop is today,” were denied to the public, according the 1% for Open Space fact sheet on Baxter Gulch.

This restriction prompted the Crested Butte Land Trust and the town of Crested Butte to begin working on restoring access through Baxter Gulch. So began a 15-year saga to obtain easements for the trail we’re celebrating today.

“The trail transitions across four different easements across private property,” writes Yerman. The final easement was obtained in 2007; trail alignment work occurred from 2006 to 2010; and the trail build commenced from 2010 to 2018.

“The project transitioned through five different town staff leading the project, including John Hess, Jake Jones, myself, Hilary Henry and Mel Yemma,” writes Yerman via email. “The town began construction in 2010 and it took eight years to construct. The trail is built on steep hillsides and took thousands of volunteer hours to build.”

The town received Great Outdoors Colorado (GOCO) funding, which allowed the town to bring in the Western Colorado Youth Corps to assist in building the trail every July from 2011 to 2018. “Without funding from GOCO and the hard work of the Western Colorado Youth Corps, this trail would not have been a possibility. The youth corps spent every July since 2011 building the sweet single-track that exists today,” writes Yerman.

Of course, where there is mountain biking, there is the Crested Butte Mountain Bike Association. “CBMBA has been putting volunteer build time and hours on the ground since 2015, and in 2017 also employed the Crested Butte Conservation Corps to help with workdays, the annual overnight, and continuing the work to connect Baxter Gulch trail to Carbon Creek,” said Ochs.

Yerman agrees, saying, “CBMBA worked for over two years to punch the last few miles of trail to get to Carbon trail.”

The steep slopes, which the trail traverses, gave all involved a run for their money, and Yerman says, “Dave Ochs and Doug Bradbury put in the long hours to make the current trail alignment a reality. I’d spend a whole day sidestepping the steep terrain with the two of them looking at the alignment they had spent weeks laying out. We did this once a week every June and July for five years. I still look at sections and am dumbfounded we were able to build such an epic single-track across certain portions of the trail.”

Ochs echoed that hard work, explaining, “probably 8,000 flags went into that alignment, that’s a lot of bending over. On average, it’s 100 pin flags every 1/10th of a mile. At least 8,000 bend overs happened on that trail, that’s a lot of back work.” Ochs couldn’t overstate the involvement of the town of Crested Butte enough in making Baxter Gulch a reality, saying, “The town did all the back work to seeing it happen, that can’t be commended enough.”

“The Baxter Gulch trail is the epitome of Crested Butte’s incredible trail access,” says Crested Butte open space coordinator Mel Yemma. “You can really choose your own adventure from a beautiful out-and-back day hike, a long hike up Mount Whetstone, or a new epic mountain bike loop by connecting it with Carbon and Green Lake trails.”

So why is this seemingly tiny bit of trail, compared to the hundreds of miles in the valley, so important that countless people have invested 25 years into the project? Ochs says, “Because it’s right in our backyard, and it takes us to a wild place, which is why many of us live here. It helps us celebrate our heritage, our backyard, our wild places, and public access to our sacred public lands.” Ochs concludes that the new loop “is hard, it serves a purpose and it’s worth it.”

If the time, effort, sweat and persistence this trail has squeezed out of all the volunteers and staff says anything about the place we call home, and the ways we enjoy it, it’s simply that: it’s worth it.

The trail is open seasonally around the first of June until October 31. There is no winter access due to several large avalanche chutes that slide over the trail every year. Bikers are encouraged to bike from town to access the trailhead instead of driving, to keep impact and parking congestion to a minimum.