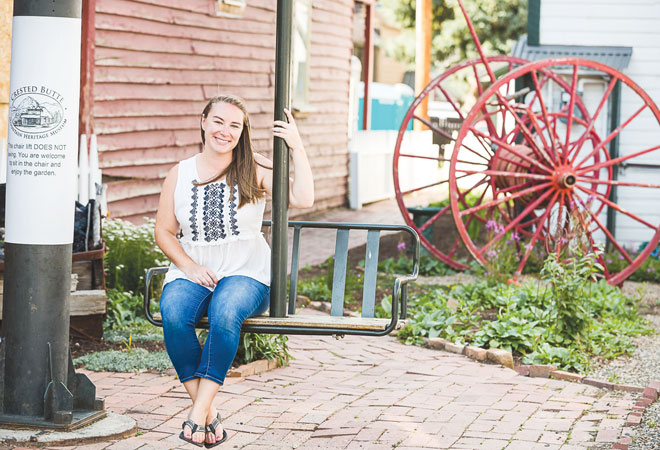 A Petito by any other name is still a Petito, and Bailey Valian is part of that ever growing and well-loved Petito clan. She was born to long time locals Pepe Valian and Cindy Petito and Bailey recants her parents’ tale that she was almost born in Almont except for the adept driving skills of her dad, who, upon arriving at the hospital, honked the car horn incessantly to get someone to come out and help. She was delivered by the nurses, because evidently she just wasn’t going to wait around for the doctor. Bailey spent her childhood in Crested Butte, one of those kids lucky enough to grow up in the smaller, tight knit community, with the freedom and joy of spending time outdoors with friends, hanging out in Totem Pole Park, eating raspberries right from the bushes that used to line the creek. The cluster of kids would leave their houses in the morning and spend the entire day outside not returning home until dinner time. Bailey smiles when she thinks about those carefree years spent in the spectacular summers that were far less crowded, “We would go up the Slate a lot, riding our bikes and we’d stop to get cherries from Doug (at the farm stand) at the 4-Way, then we’d have ourselves a little picnic by the Slate River, no adults just us kids. We did a lot of hiking with friends and family.”

When the snow fell she recalls, “And oh yes, we skied! My parents actually met in ski school. Dad grew up in Mt. Hood but mom learned to ski on the job as a ski school instructor for CBMR. Crested Butte was still in the King of Hearts stage where anyone could be anything they wanted,” she refers to the 1967 movie that the town’s unique can-do spirit is often compared to, where the colorful inmates of an insane asylum take over the town, assuming the role of any character they desire to be. “It was a magical place,” she says of CB in the 1990s and through the turn of that century.

After the family moved from town to CB South where they built their home, Bailey remembers the pristine winter days of cross country skiing up Cement Creek and in the summer there was always fishing, “Dad would take us fishing,” Bailey says, and along with her sister Hannah, “We’d pack up the dogs and a rod. We had a place we named Butterfly Beach. It was just a decent sized patch of sand where there were always these little blue butterflies.” Through all the fabulous childhood adventures, Bailey fondly remembers all the family gatherings, “We were all very close, an extended family, and we lived within a block of my aunts (that’s the infamous Petito Sisters, Lynda Jackson Petito and Bonnie Petito Chlipala) so there was always lots of family time and there still is, lots of cousin time and lots of holidays.”

Bailey got to attend the old CB school through second grade, which was housed in the historic building where the town offices are currently located. She laughs that she still sees moments of her youth whenever she walks into the building, “I still have flashbacks when I go in there. I’d get in trouble for sliding down those big cement handrails. The rope in the gym was always a popular thing in gym class.” By third grade, she moved into the newly built school, Crested Butte Community School, “Kathy Sporcich was my teacher. We’d see the older kids more at the old school because it was kindergarten through eighth grade, and once we went to the new school the older kids had their own wing. The most exciting thing at the new school was the library.  Mom was the school librarian. I’d be there helping her set up the new library before the school year started. We had more extravagant story times with puppets and giant pillows to sit on. It was fun and so exciting.”

When the family moved to Denver so sister Hannah could play hockey, Bailey was not happy about leaving her paradise, “I was very bitter at first but ultimately I’m glad because I went to an amazing high school in Denver, Rocky Mountain School of Expeditionary Learning (RMSEL). It’s an Outward Bound based school so we’d go on at least three camping trips a year. In my junior year, we got to backpack in Copper Canyon, Mexico, and camp in the communities of the Tarahumara natives. We’d do volunteer projects. We’d go to the Sand Dunes, and we’d take canoe trips. We didn’t have textbooks, rather, the education embraced life lessons and I still learned what I needed, but they focused more on supporting your education in the way you wanted it, for example, each year you got time off from school to go learn something new. I did something different every year.”

She also took time to come back to Crested Butte and she explains that one year she returned to help out her aunt Bonnie in her store, Flying Petito Sisters Video. Yet another year she learned how community radio worked from being on her aunts’ KBUT radio shows, Lynda (The Finer Things) and Bonnie (Everyday Housewife). “One year, I learned how to telemark ski with my dad…anything to get me back here because this was home,” Bailey knew where her community and her heart was.

When Bailey graduated from high school in 2007, she confesses, “I didn’t know what I wanted to do at all. I enrolled at CSU in a Life Science program. I didn’t really like school at all so I only lasted one semester. I went back to Denver, worked and hung out.” Always wanting to work with animals, Bailey was accepted into Veterinary Tech School, “Mostly because my mom encouraged me and I loved animals. It was two years, full time, year round, and it was the first time I actually enjoyed school. I did really well,” she graduated with honors in 2014, landing a job at the Washington Park Vet Clinic.

However, the road to adventure called and Bailey and her sister Hannah took off to trek through Europe for a month. “We did the isles… Iceland, England, Ireland and Scotland. It was awesome. I got back, had no job, and I had spent all my savings. I had a previous employer who had worked retail at Colorado Ski and Golf in Denver and he was able to get me a seasonal winter job. I thought it was perfect,” she felt of the transitional work that she figured was temporary until she could return to the vet tech world. But Bailey was too responsible and more mature than her co-workers and continued to climb the management ladder with really good salary raises. “There’s a lot of ski bums working at that store because you get a free ski pass so the work ethic standards are set pretty low,” she laughs. “I have pretty high work ethic standards that come from my parents working so hard, so the store kept promoting me, and giving me more money than I would have made as a vet tech… so I just stayed there.”

Bailey and her boyfriend Matt Porter, who hated the city, both wanted to move to the mountains. He started applying for jobs and was hired at the IT department at Western State Colorado University (WSCU). Bailey was thrilled. She had interviewed for the store manager position at the CB Heritage Museum but had to pass on the job since they weren’t ready to move yet and the museum needed someone immediately. When they finally relocated to CB, she began working at Rocky Mountain Trees in May of 2017, commuting from Gunnison at first until they could find a place in town. When the position for store manager at the museum unexpectedly opened up again, Bailey was hired.

As store manager she gets to purchase the eclectic products as well as, “A lot of bookkeeping that I’m still learning. I’m also helping with events and marketing which is fun. It’s a great environment to be in because the people here are so helpful, understanding and they’re a team. It’s nice to be part of it and feel like I’m part of the team. It’s such a cool place to come back to after being gone for fifteen years and now to be working in the museum and sharing my history of growing up here, and I’m learning so much more than I knew before. I’ve definitely become a history nerd,” she giggles, surrounded by antique artifacts, drawers upon drawers of files and gaggles of Crested Butte related paraphernalia.

Bailey just finished a run with the Crested Butte Mountain Theatre’s (CBMT) sold out production, Hedwig and the Angry Inch, where she performed as a backup singer and also a backstage dresser. She’s been involved with the CBMT from her childhood, as most of the Petito clan were involved in the theatre, but specifically, her mom acted and directed in many productions back in the day. Bailey’s father would run the lights for many of the plays. Bailey was involved in high school theatre in Denver where her mom became the theatre teacher and started a theatre program. “So this is my first time on stage since high school. It’s been a good way to ease back into it and it’s been so much fun,” Bailey says.

“I feel like the magic of the King of Hearts is still here in town. I didn’t go to business management school, or accounting school but here I am working in a job that entails those things and I’ve been given a chance and trust. You have to learn to wear different hats and be open to wearing different hats to contribute to wherever you’re working. You do what you need to do to get the job done and in CB you need to understand that to embrace the CB lifestyle. Basically, we’re all Jacks-of-all-trades here. Growing up here was always, try it and see if you can do it and if you can’t, either figure out why or find something else you want to try. I see and understand that it’s crazy, that people think it’s too much, that there are too many people, and sometimes I think that’s more of a focus than how special this place really is. My experience in moving back is that it’s obviously different than earlier times but moving here is still something so special and this community still has a very supportive embrace. This is home and always will be. Family, whether it’s blood or not, is a big draw. I have such a community here. I love the memories I have just walking down the street. Even though it’s not a city there’s still plenty to do here and I hope I never have to leave.”