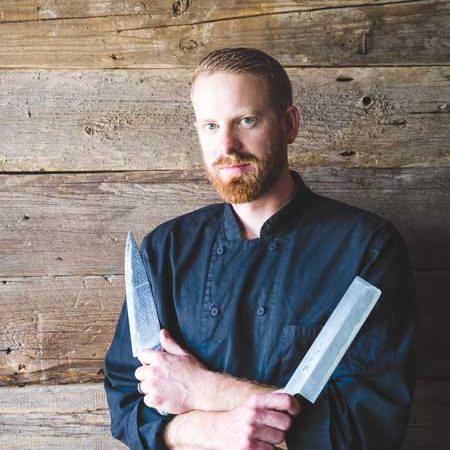 There are signs along the road of where we came from to where we are going that point to the direction we should probably take in life, but so often we don’t recognize them until we’ve arrived at our destination and realize we’ve been on the right path all along.

Luke Martin began his chef career at a very early age, although he didn’t recognize it at the time, when he was baking cookies, brownies and cakes with his mom in his childhood home in Aitkin, Minnesota, a small rural town about two hours north of Minneapolis. Today, he tends to the deliveries and ordering in his co-owned restaurant in Gunnison, Blackstock Bistro. Donning a classy black double-breasted chef jacket, he’ll begin prepping the food for the evening’s onslaught of hungry customers.

Luke’s mother mostly worked for non-profits, organizing various events such as senior meal delivery and running soup kitchens through their church, which is where Luke got his first real kitchen experience at the age of 12, helping to get all the food ready and then serving it. In their home, the kitchen was the center of their universe, and architecturally the middle of the house, so that they had to walk through it to get to the rest of the rooms. He remembers it as being where the action always was.

“I knew I liked to bake but I also liked working with my hands,” Luke tells. He recalls helping to build the barn on the family property when he was only four years old, carrying nails around and fetching things for his father and older brothers. Later, he helped remodel their home when he was 13, doing both bathrooms, building two decks and laying the hardwood floors. “Dad was really handy and I learned a lot from him,” he says.

Luke grew up engaged in sports with his two brothers, Gabe and Phil, both of whom also lived in Crested Butte at one time or another. As kids, they’d shoot basketball hoops in the driveway and Luke also played baseball, football and just for fun, he started golfing at the age of 10. Although there were a lot of active sports in his life, his parents were music advocates and required that their sons experience it as well. “I started playing trumpet in fifth grade. I haven’t played since I was 16 but it’d be fun to do that again. We were also all in choir, in church and school. I was in choir from the time I was six all the way through high school, doing musicals and concerts throughout all the different seasons and holidays.”

After high school graduation in 2006 Luke had a revelation. “I had a moment that year, that summer after graduation when I had a bunch of friends over for a barbeque. I made dinner, burgers, brats, and shrimp scampi on the grill for ten of my friends, in the dark, using a headlamp, and that was the moment I became really interested in cooking. I realized I was providing food to make people happy and that was a big part of it for me, making people happy and at the same time, using my hands to do something I loved.”

He concluded that he might be able to do this every day and make a living at it. In the meantime, he was employed as a carpenter that summer before starting college at the University of Wisconsin Superior, with an interest in accounting and business.

He returned to college in Wisconsin but wasn’t sold on the idea of continuing there. “Besides,” he smiles, “I was thinking it’d be nice to be close to my brothers and get residency so I could go to WSCU. I was going more in the direction of business, accounting, and entrepreneurship. Culinary school was always in the back of my mind but I wasn’t ready to commit to that yet because financially it’s a huge commitment, and you have to relocate to attend school, plus, I wanted to get some experience before I actually committed to it.”

In 2007, Luke landed a job at Lil’s but two weeks before his scheduled move out here, Lil’s had their epic fire that closed the restaurant for almost a year while they rebuilt. So he took a job on the mountain as a snowmaker, which gave him a ski pass. He was also hired at the Bacchanale as a cook. “It was arguably the best winter in Crested Butte, and that was my intro to living here. Making snow was not a bad job because we got to snowmobile all over the mountain and in the middle of that huge snowstorm that dropped 100 inches in the beginning of December. I was a 20-year old working in the industry and getting experience. I had my goal to get my kitchen experience and get my residency for WSCU.” Life was going great.

When Lil’s reopened the following spring of 2008, Luke started out as the fry cook in their kitchen, working his way toward being a sushi chef. That summer, he also helped build Ben Somrak’s house in Buckhorn. “I worked a lot, doing construction from 7 a.m. to 3 p.m. then straight to the kitchen until 11 p.m. For a couple summers, I just worked a lot. I got Sundays off and I usually hiked, played basketball, golfed and did men’s softball, which they don’t do anymore. I was also on the dodgeball league in Jerry’s Gym and it was like straight out of the movie,” he laughs. “In the winter, I skied.”

By 2010 he finally worked his way up to roll sushi at Lil’s, sometimes going back and forth between the sushi line and the kitchen to help out.

Having acquired residency, he began business classes at WSCU in 2009, and played baseball for the club team. He was still working at Lil’s and making snow for CBMR during the winters. “That was a crazy fall, doing all that simultaneously, and there was a time I was going to school from 9 a.m. to 2 p.m., then rolling sushi at Lil’s from 3 to 10 p.m., then I had to get up on the mountain for snowmaking from midnight to noon and then back to Lil’s. It wasn’t an ongoing thing but for a couple months, November and December, I was doing those three things.”

In January 2011, the calling to commit finally hit Luke. “I decided this wasn’t the right fit for me,” he says of all the job juggling, “and I was ready to commit to culinary school.”

He moved to Denver to attend the International Culinary School at The Art Institute, where Matt Smith, co-owner and head chef of Lil’s, had also gone. “Matt hooked me up with a sushi bar connection in Denver where he used to work, Sushi Hai, while I was going to culinary school,” Luke says, and he also worked at Hapa Sushi.

Luke enrolled in the culinary management program but he also learned all the basics and advanced skills of the culinary arts. “You learn recipes and techniques that are used throughout the world. It combined everything that I liked to do. I was always interested in accounting and business and it was a good balance of working with my hands and learning to cook,” he says of finding his niche. “I was going to school full time and working 35 hours a week rolling sushi. By the time you finish school you have a complete restaurant concept.”

Luke discovered a love for learning about wines, “We did a lot of beverage and wine classes and I was really interested in wines. If I had stayed in Denver I might have pursued a career as a sommelier. When you learn about wine you learn about geography, history, soil, climate, and how they make the wines. Wine is one of the most complex subjects and to be a master sommelier is the most difficult test in the world. There are only about 100 master sommeliers in the world.”

Luke kept in close contact with Lil’s owners Matt and Dana; the trio had always considered a partnership in some capacity. When Luke moved back in 2014, they made that partnership happen, opening Blackstock Bistro in Gunnison that summer. He and Matt developed the menu together, and Dana does the cocktail and wine list. Luke basically manages and runs the day-to-day business. “I was hoping to put myself in a chef position as a career and I really love this valley and having a restaurant here. We’ve been voted best happy hour a number of times,” he smiles with pride. “I’m completely focused on continuing to grow Blackstock Bistro. It takes a lot of hours to maintain our consistency, we have a high quality of food, and people have a high expectation of consistency. It takes a lot of work to do that. One the best professors I had said, work hard for your employees. If your employees are successful and make money, you will be successful. So, I believe that if I work hard on the whole restaurant in general, I’m putting my cooks and servers in place to succeed. If they’re succeeding then I’m succeeding.”

Another milestone for Luke in 2014 was that he met and started dating his now wife, Ginger Michna, when she was working for his brother Gabe at Colorado Freeskier. They married in September 2016. “We bought a home by the golf course in Gunnison in 2017. I try to play a lot of golf but this time of year it’s all about work,” Luke admits. “I still play basketball and I mountain bike a lot. Ginger and I both bike, camp and ski, the things we love to do together. It’s a paradise and the quality of life here in the valley can’t be beat. I continue to see myself here and if everything goes well, I can be fortunate enough to stay in the valley.”

For more information about Blackstock Bistro, visit online blackstockbistro.com and on Facebook.