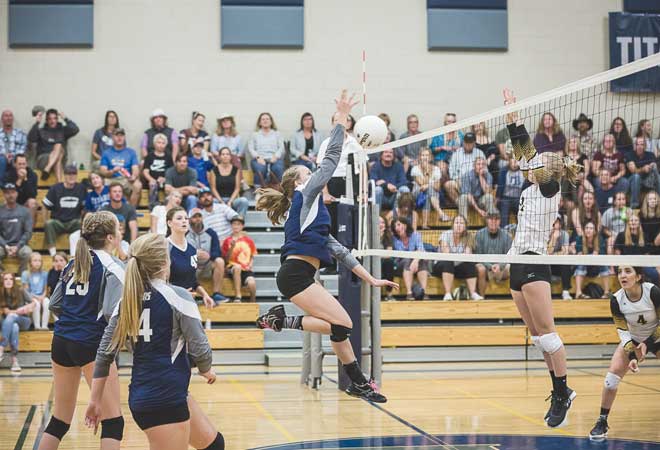 “I’ve never seen them want a win so badly”

There is definitely something different about this year’s Crested Butte Titans volleyball team and that difference was on display when they hosted the Sargent Farmers on Thursday, September 13, officially opening the Titans’ homecoming weekend.

It all started with the opening set as the Titans jumped out to a 10-4 lead paced by a service run from Sophie Hall and a big kill from Savannah Freeman.

“We had a great warm-up and were able to start strong,” says coach Morgan McNallie.

The Farmers rallied back though as the Titans started unraveling mentally and the two teams were soon tied up 20-20 with the momentum swinging back and forth. But when push came to shove, a couple of errors allowed Sargent to pull away and win the opening set 25-21.

“We started playing down to their level and they got on a run and we tend to shut down pretty quickly when the other team goes on a run,” says McNallie.

The Titans appeared to have recovered when they opened the second set. Despite falling behind 6-3 to open, the Titans came back with a five-point run with solid serving from Sydney Stoneberg and the effort of Stella Newman to keep the ball alive, helping Crested Butte to an 8-6 lead.

Then things started to unravel for the Titans once again and Sargent started to roll. A couple of questionable calls and an injury to Sami Lakoski exacerbated the Titans’ slide and they dropped the second set 25-12.

“We shut down as a team and one error led to another and then our communication shut down,” says McNallie. “We fell apart as a team.”

Facing a team of frustrated players who were splitting apart at the seams, McNallie decided it was time to share some words with her squad in an effort to turn things around.

“We had a little powwow and I told them to put a smile on their face and change their attitude or they weren’t going to play,” explains McNallie. “They fixed it really quick. There was a change in attitude and a change in heart.”

The transformation on the bench filtered onto the floor as they opened the third set with their backs against the wall. The team rallied to pull off two big points early in the set and built off of that energy. The Farmers matched the Titans’ intensity and the teams continued to trade attacks and were tied 19-19 with the set hanging in the balance. More points back and forth left the set in uncertainty until Crested Butte won four of the final five points to take the third set 25-22.

“I’ve never seen a turnaround like that from this team,” says McNallie. “I’ve never seen them want a win so badly. It came out of left field and having a huge crowd there yelling really helped.”

The Titans carried that energy into the fourth set and the two teams continued to battle and trade off big points with neither opening a lead on the other. The difference came when the Titans were up 15-14 and Maisy Ramsey stepped to the service line. Ramsey was spot-on in her serves and the Titans capitalized on her consistency to go on a seven-point run. Things got a little shaky the next several points but with the crowd on their feet and the Titans refusing to fold, they remained together as a team and finished off Sargent 25-20 to force a fifth and final set.

Unfortunately a series of events out of their control took its toll on the Titans. The result was a loss of concentration and a loss of Crested Butte’s energy from the past two sets. They hung in there and were down just 9-8 after a big kill down the line from Freeman but Sargent scored six of the next seven points to win 15-9 and take the match.

“There were some issues that affected us,” says McNallie. “It was one of the most frustrating games I’ve ever been a part of. It was a brutal loss and we were all bummed but I’m extremely proud with how they played. It was cool to see.”

In the end, Ramsey, Ellia Pannier and Sydney Stoneberg proved the top offensive players for the Titans while Freeman, Stoneberg and Pannier led the team on defense.

The Titans will host the Sanford Indians on Friday, September 21 in mighty Mt. Olympus and then hit the road to face South Park on Saturday.

“I think if their attitude is there, their game will be there and when they stay positive as a team, they win,” says McNallie.