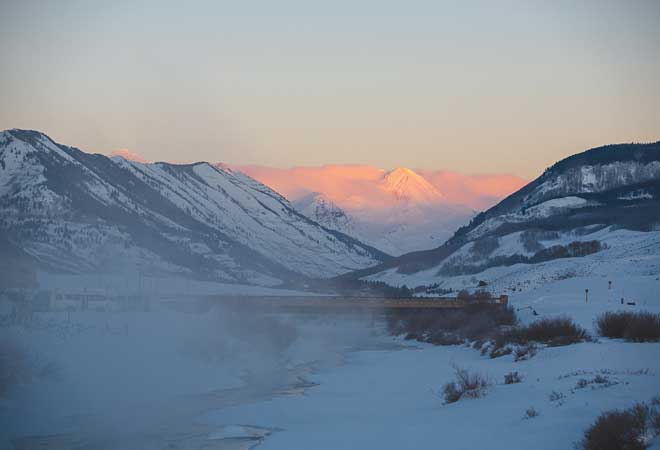 There was a return to winter this week—and I mean a return from 2017, since last year winter sort of skipped over us. Thank goodness it is back because winter is pretty nice up here.

Sunday night on Elk Avenue was storybook pretty. As we walked out of a locally owned restaurant about 9 o’clock the snow was falling on top of the already accumulated six or seven inches. Crested Butte’s controversial snow banks were piling up nice and clean and made the image so uniquely pretty it was breathtaking. The Elk Avenue lampposts spread a warm glow on the entire downtown fairytale. It was a 3-D postcard scene. It touched the heart. One of the people we walked out with noted that looking at the quiet village in a winter snow storm made it crystal clear why people spend a lot of money to come to visit.

I love the winters in Crested Butte. And this week we got a good taste of winter. It was lung-burning cold a few mornings and the snow laid its quieting blanket on the entire valley. You know, the brutal cold used to last for a few weeks in January instead of just a few hours during a couple days. There were weeks when the daytime highs might be negative 10 and the lows would dip to minus 50 at night. It made one feel alive—nostril-hair-frozen, but alive.

January snow brings with it a welcome winter’s warmth. Light and mesmerizing as it falls from the sky, it covers the dirt and dog residue while giving the feeling of embracing your heart. Hopefully it will embrace the filling of Blue Mesa in June as well. But right now it opens the gateways to fun. The ski area’s Extreme Limits begin to open, as was seen this week with the High Lift spinning on Monday so we could get to the Headwall. It doesn’t take long anymore to ski up pretty much everything that is open on the mountain but if you can get some untracked, it stays with you for a season. While the stashes don’t last as long, the energy found in a rope drop powder run is hard to match. And by the way, opening the Face and Glades are probably not far behind.

Backcountry skinning or the growing Nordic system can take you to pristine places of quiet where the untracked snow reminds you what it means to be alone in nature. It can help you reflect on why you live or visit the high country and can take you deep into your soul. As the wind blows some snow from the swaying pine trees on a single-digit morning, it may take you back in time when our human ancestors who were also drawn to the mountains (but without gas heat) wondered why they didn’t leave for that place now called Paonia earlier in the winter.

Winter is not without challenges. Behind the high mountain postcard are real people dealing with real life.

Ask anyone who has slipped on the ice and felt winter for months in their bones. Powder days on Mondays are torture for many people with “real jobs.” Talk about a life challenge. My neighbors and I have spewed tons of snow into each other’s yards with our snowblowers and hoisted hundreds of pounds of white stuff with a long-handled shovel over the ever-growing snow hills. I can also attest that spending time digging out the car that gets buried inches from a fire hydrant isn’t an easy task (and thanks to Justin and Tracy for the help, by the way). There are the holiday lines at the post office that most of America will never have to experience. There’s a school again on the verge of capacity, the hassle with slow internet and low-paying jobs. There are the dreary and sometimes relentless meetings that can spark raw emotions. That is all part of living in a small town postcard—and protecting it.

The most recent example might be Monday’s joint council meeting on Brush Creek. You had Janet Farmer and Will Dujardin—two council representatives who appear to be very different from another, arguing for the same cause. Dujardin was deep in Headwall powder all day Monday, while Farmer, I believe, was deep in mahjong, but both are stridently pushing the same perspective that more units are better on the Brush Creek site. On the other side were Dwayne Lehnertz and Jim Schmidt, who have expressed real personal doubt about the developer and the size of the proposal. But they came along in compromise to agree that they could live with more units (156) than I’ve heard either say they are comfortable with. Others at the meeting pointed out the current discussion was important and useful but should have been taking place as the first part of the process instead of in the middle. And while the council reps spent too much time talking washers and dryers, they did reach a consensus. But it may or may not matter in the end. The Gatesco development team has been subtly clear they are not committed to anything going out there yet, even at the 180-unit level since there are still too many unknowns such as water and sewer availability, along with financial feasibility, as the project continues to morph through the public process.

But that type of process is part of protecting the postcard. There is passion and sincerity by those on all sides of pertinent local discussions, whether they be about Brush Creek, paid parking or Elk Avenue snow banks.

That is why walking out of a restaurant in a January snowstorm, listening to the quiet of the woods on Nordic skis, getting a rope drop, or watching passion and compromise at a town meeting continue to be a grand reward for people who call this place home. Being surrounded in a 3-D postcard is part of the beauty—that comes with responsibility—of living here at 9,000 feet.