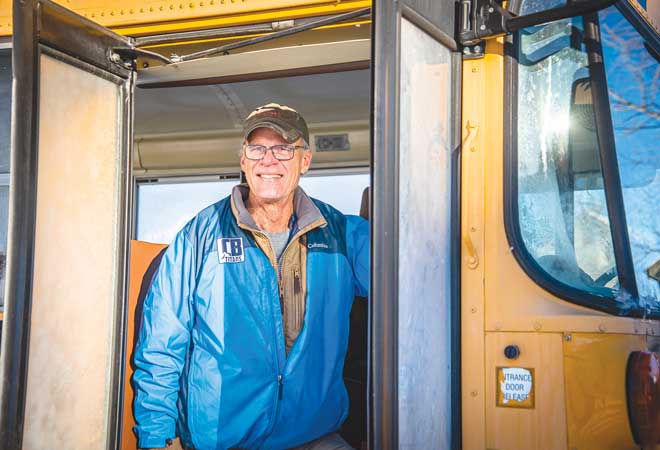 Bill Kastning is a fourth-generation Coloradoan, with his roots in Delta County. He was born the son of a preacher man, his father a Baptist minister, and both maternal and paternal ancestry arrived with the second land rush.

He tells of a long family history steeped in coal mining and employed by CFI, the same coal mining company that essentially owned Crested Butte back in the days when winters were colder and deeper, and a grey pungent mist hung in the air from coal fires that heated the homes.

Bill’s dad grew up in Cedaredge. He retells his father’s tale, “He’d ride the train to Crested Butte to play the Crested Butte basketball team and they were afraid to win because the Crested Butte community was all there and the Crested Butte kids were tough. The train was the only way to get to Crested Butte in the 1930s for the Cedaredge kids. Tony Mihelich had told me that they didn’t plow the road between Crested Butte and Gunnison until after WWII, so you had to take your car down to Gunnison to park it for the winter if you wanted to get out to go anywhere. Otherwise, if you left it in town, it’d get buried in the snow.”

Bill grew up in a few places, but he graduated from high school in Trinidad in 1964, “which was like a sister community to Crested Butte because when they closed the Big Mine here they relocated all the miners who were willing to move to Trinidad. A bunch of my classmates there had the same surnames as Crested Butte families, like Somrak, Stadjuhar, and Niccoli. Between cattle and coal, Trinidad was huge with its diverse ethnic population.

“Growing up there was like a scene out of American Graffiti,” he continues, speaking of all the cool cars cruising the strip that was once the road for cattle drives.

“Through the hamburger drive-in and downtown and back around,” he says, it was especially busy during the Friday and Saturday night cruise scene.

After high school, he enrolled at Ottawa University in Kansas with a hefty curriculum of biology and chemistry classes because he loved science, and earned his degree in that discipline. But it was during the era of drafting young men for war by a lottery number system. Bill says after graduation in 1968, “With the Vietnam war hanging over me, I chose to avoid killing people by going to seminary school in Berkeley, California.” He enrolled at the Graduate Theological Union, an interdenominational school. “I loved it but I had no desire to be a minister,” he laughs about having grown up as the son of one.

After two years of seminary he took an internship with Campus Ministry at CU Boulder in 1971, helping to run several programs like social justice, student congregation, and draft counseling. In 1976 he started a senior citizen program in eastern Boulder County, basically Louisville and Lafayette, driving the elderly around to places like Trail Ridge Road in the Rocky Mountain National Park and the Ice Capades in Denver. “The seniors were mostly Italian miners’ widows from the Louisville coal mine. I had a weekly dinner that I organized and they all came to,” he says with affection for those mostly “little old Italian women,” who made his first bus driving experience so memorable.

In 1977, he was living in Boulder, across the street from Mo Siegel, who was just starting up Celestial Seasonings. Mo hired Bill as a salesman but, Bill laughs, “I sucked at it. So he put me in charge of the very first Red Zinger bicycle race as a promoter and I also worked in the warehouse. I organized the Red Zinger route logistics and got all the necessary permissions,” he says. But when the race got really big, which it did very quickly by 1978, Mo hired a professional.

One of the things Bill is exceptionally proud of is his role in the Rocky Mountain Rescue Group of Boulder.

“It’s the busiest mountain rescue organization in the state because of areas like Boulder Canyon, Eldorado Springs Canyon, and Rocky Mountain National Park, where there are a lot of lost or stuck climbers or mountain tragedies like plane crashes.” The percentage of live rescues to body retrievals, the latter being far more common, was devastating to Bill and he tells of the emotional hardship of almost a decade of service from 1972. A hardy hippie sort of mountain man in his own right, Bill explains, “I’ve always loved mountain climbing, mostly mountaineering. I was more into using an ice ax and crampons and climbing mountains around Colorado, Wyoming and the Northwest.”

Bill and his cousin, Roy Kastning, decided to open a photography studio in Boulder in 1978, ColorWest Photography. “We did a little of everything from freelance photography to developing slides, prints and film.” Roy, who had attended Western State College (WSC, now Western Colorado University), always wanted to move back to the Gunnison valley and in 1979 finally convinced Bill of a grand life there. The duo started out behind Mario’s Pizza in a building that they bought and expanded, converting it into a huge studio and lab for portraits and processing film. However, the timing wasn’t in their favor.

“The recession took us down in 1982,” he laments, and they lost the Gunnison building but hung onto the business by moving it to Crested Butte. A couple of years later, they sold the business to Dusty Demerson.

Bill had met Carol Schlaile when they were both working at a summer camp in the Black Forest, north of Colorado Springs in 1966. “She was still in high school and I was…older… and in college,” he smiles. Carol is the daughter of a German immigrant, born and raised in Boulder, and she had never lived anywhere else until Bill brought her to Crested Butte. “Our first date was to climb Long’s Peak. It started as a friendship but we wound up getting married in 1971.” Eleven years later in 1982, their son, Andrew, was born, and daughter Amelie followed in 1989.

Bill built his family a home in Crested Butte South in 1982. To help keep food on the table after they sold the photography business, Bill did a lot of construction before he went to work as a driver for Alpine Express in 1988. At the same time, he enrolled in education courses to get his teaching certification at WSC. Afterwards, he was hired by RE1J schools as a third grade teacher at Blackstock Elementary, where he stayed for 19 years. He retired in 2012 and became a school bus driver when the superintendent of the school district, Jon Nelson, begged him to drive one of the Crested Butte routes.

Bill agreed to stay on only until Christmas break because he could make much more money at Alpine Express, especially with the tourist season kicking in. Six years later, he’s still doing the school bus route because, he smiles, “I fell in love with the kids and especially the sports teams. It was fun to cheer them on and they love me because I don’t just sit in the bus, I go into the event and cheer them on. The highlight, to me, was when I got to watch a bunch of teenage boys have an experience they’ll never forget as long as they live.”

He’s talking about the playoffs and final championship of State 2A soccer that the Titan boys won last fall. “It was the first time a big team sport won the state championship,” he says. Bill enjoys all the teams he transports. “I really enjoyed watching the girls volley team as well. They played the best I’ve ever seen them play this year. I also love watching track and have gone to the state track meets several times. Basically, I just love everything about extra-curricular sports.

Bill is involved with students another way, too. He and Carol initiated the four-day archeology excursions to Four Corners every autumn with the Crested Butte Community School sixth graders to learn about ancestral Puebloans. He also takes the eighth grade class on a three-day cultural and history experience that he started. They camp at the National Sand Dunes and then travel down to San Luis to see Fort Garland, the oldest Army outpost, which dates to the Civil War Era. Then they go on to hike to the top of a hill to tour an ornate Catholic Chapel with life-sized bronze sculptures.

“The rest of experience is just having fun outdoors, climbing the sand dunes, and playing in the water at the bottom,” Bill says. He also drives the yearly excursion of fifth graders to the Denver Museum and fourth graders to the Keystone Science Camp in Summit County.

This coming summer, Bill and Carol plan to drive to Anchorage, Alaska, to visit their son and his three daughters, and explore along the way. “From Crested Butte to Alaska is scenic. Everything about Alaska is like Crested Butte on steroids. Moose will stomp you, grizzlies will eat you and the mountains start at sea level so they look much bigger than ours.”

No matter how stunning Alaska is, Bill will always return to Crested Butte because, he feels, “With all the experiences we’ve had here, we can’t think of another place in the world where a community has your back in every way, whether it’s a wonderful success story like the boys soccer team or a horrible suicide tragedy, the highest of highs and the lowest of lows—this community has your back. This community is strong in its support system and we have an enormous network of friends from living here 40 years.”

Although the community has changed in some aspects, Bill also reflects on the positive. “There are still wonderful things and long-time locals and people to focus on and block out the fact that we’re now owned by a huge resort conglomerate. But we’re happy to live here and we don’t see ourselves living anywhere else.”