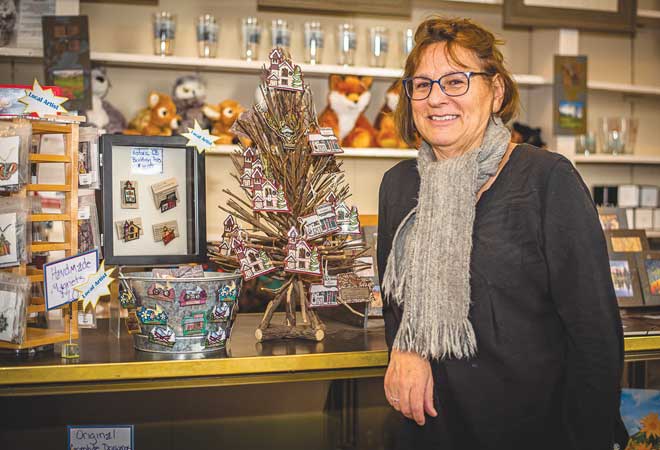 “My life was like The Wonder Years and I was Kevin Arnold. I was a hippie-jock. That was my life in Southern California,” smiles Cindy Petito, the youngest of the long-time, locally beloved Petito Sisters. When she was just ten years old, the family moved to San Pedro, California, leaving their parents’ hometowns of Port Dover, Ontario and Niagara Falls, N.Y.

Her dad, a pharmacist, had gotten a job in southern California because he was tired of shoveling snow. Cindy and her two older sisters, Lynda and Bonnie, have dual citizenship in Canada and the United States. She became excited about the West Coast move when she realized, “I was going to learn how to surf, mostly body surfing. The adjustment was easy and I remember that people at school thought I had an accent. I made friends quickly and we had a good, fun neighborhood.”

Cindy was one of two from her sixth grade class to receive the President’s Physical Fitness Award. “I had a certificate signed by Richard Nixon and won a year’s membership at the YMCA,” she says. Cindy would load up her bike, swimming fins dangling from her handlebars and a raft bungied to the rack, and ride down to the beach after classes. Afterwards, there were wet suits and sand strewn across her bedroom floor, which she recalls fondly, would keep the family cats entertained.

Cindy played volleyball and skied throughout junior high and high school. “I learned to ski on the hillsides of the Palos Verdes, in southern California, by the beach,” which seems like an odd and impossible feat for the warm climate there, but she explains, “They brought snow in by the truckloads and we learned to ski at night since it would get too warm in the day. We also had a ski club and we’d get used to our skis by practicing on the grass.” The ski club took trips up to Big Bear resort.

“I was also interested in acting, but I was shy. There was a clique of theatre kids in high school but I finally auditioned in my senior year. They were doing improv, which I was not good at, so I didn’t get a part. But, I was invited to be part of a class movie project.”

Following graduation in the bicentennial year of 1976, Cindy and her sister Bonnie took a cross-country road trip, visiting sister Lynda who was living in New York City at the time. “I thought I was going to be an artist because I was always interested in art, drawing and painting,” she recalls. Cindy wanted to focus on becoming a commercial or graphic artist, but a field trip to an ad agency changed her mind when she realized how stressful the job was. “I felt the intensity running around me.”

She worked odd jobs, working in a greenhouse, babysitting, cleaning houses. Lynda had moved to Crested Butte in June 1978, and Cindy moved to Crested Butte site-unseen. “I had known about Crested Butte from my ski magazines and also, my sister was here. I remember driving into town in Bonnie’s VW bug and thinking ‘Wow, this is the wild west.’ The streets weren’t paved and there weren’t many people around. I was 20 and I felt like I was on the set of a western movie,” she laughs.

Cindy moved into a house on Sopris that had been moved down from Irwin in the late 1800s. “You could see through the cracks in the exterior door and the house was always cold,” she recalls of Crested Butte’s more rugged days. “Lynda’s room had icicles hanging from the ceiling.”

She had the various Crested Butte jobs, serving breakfast at the Wooden Nickel, working at Chez Porque, a BBQ place where the Talk of the Town is now located (and upstairs was Lawrence of Oregano). “I wasn’t 21 yet but I was serving alcoholic drinks with the food. I played softball on the Final Blows team, a Cinderella team because we won and we were a women’s team. They filmed our championship games and played them on cable TV. I absolutely loved it here. I loved the winters. I got a job cleaning condos where I had the ‘Most Ski Time’ award, which means I forgot to clock out and went skiing.”

She also became an avid mountain biker. During her early days as a new Crested Buttian, Cindy worked for the Crested Butte Chronicle doing the layout and paste-up and became the sports writer as well, using the byline Lois Lane.

In her first summer here, Cindy became involved with the Crested Butte Mountain Theatre, designing sets, costumes, and posters. In 1982, she acted in her first play, the summer production of Bleacher Bums. She had been reluctant to audition but her sister Lynda insisted. After that first performance, she was hooked, unstoppable and couldn’t stay off the stage, acting in three more productions.

Cindy decided to pursue completing her college education and moved back to California to attend school for four years. “It took me eight years after high school and four years of school to get a two year degree in technical illustration,” she laughs. “I wasn’t sure what I was going to do with it but I got a job right away drawing airplane parts. I was working for a company in the Redondo Beach area that drew up engine drawings and airplane parts.”

Cindy had met Pepi Valian when they taught skiing together in Crested Butte and they married in Las Vegas in 1984. The couple had their first daughter, Hanna, in 1986 in Anaheim. They returned to Crested Butte the following year and their second daughter, Bailey, was born in Gunnison in 1989. In the 1990s, Cindy had her own drafting business, mostly doing house renovation plans in Crested Butte. She was also manager of the Crested Butte Mountain Theatre. “I put the phone in because we didn’t even have a phone back then.”

When the couple went their separate ways in 2001, Cindy moved to Denver with the girls, in order to expand their experiences. “The spark to move was that there was a girl’s hockey team there,” she says, and both her girls played.

In Denver, Cindy first worked at the public libraries, as well as the costume shop at the Denver School of the Arts and developed a drafting curriculum for set design for the Denver School of Arts. Cindy immersed herself in directing plays at her daughters’ school and she notes that Crested Butte teaches you to be a creative Jack-of-all-trades. “When I lived in Crested Butte I did everything from stacking wood for the mountain condos, to cleaning those condos, to drawing floor plans for homes built in the 1800s, and waitressing.”

In March 2011, Cindy relocated to Colorado Springs when she remarried, and was employed at both the public library and public school library. In 2015 she moved to Las Vegas, “to check out some warmth for a change, working in school library there. I found there are actually a lot of beautiful areas in the Las Vegas valley that I didn’t know about. The mountains aren’t as high but Nevada is the most mountainous state. I did a lot of hiking, because there’s a lot of hiking you can do there. You can’t go out in the summer because it’s 116 degrees for at least three months.”

During her time in Las Vegas, Cindy began to develop her own line of jewelry and ornament design, which she now sells in the Crested Butte Heritage Museum.

The spring of 2018 brought changes once again for Cindy when she and her husband split and she decided to return to Crested Butte, the place she felt was home. With her sisters and their families residing in town, it was a good move. She worked part-time at the Crested Butte library before getting hired last August at Western Colorado University (WCU, formerly WSCU and WSC) as an administrative assistant in the Communication Arts, Language, and Literature Department (CALL).

“Basically, I serve 25 faculty members and I love it. I’m learning a lot of new things. Everyone’s very supportive,” she says of the learning curve. “I wouldn’t have even applied for the position if it wasn’t for the free RTA bus,” she says of the 45-minute free shuttle ride from Crested Butte to Gunnison.

“Starting over at 60 was scary, so I returned to the town that I felt was my home. I’ve lived in quite a few places, but I’ve never lived anywhere that felt like a community that everybody is a part of. I have roots here that I don’t have anywhere else. I moved here 40 years ago and there was something about that time that bonded all of us. I was always connected to this place and people would say ‘Welcome home’ when I came for a visit. I’m inspired by the older, strong women in this town, especially now at this point in my life. It’s very motivating to be surrounded by all these strong women.”

Cindy feels that here at the end of the road and seemingly far from the outside world, “You push yourself to do something you didn’t think you could do and you surprise yourself because you learn that you really are more than you think you are. Not everybody can live here. That first winter I spent here, I really loved that feeling, that it was so extreme and not everybody could be here. It was such a magical time, back in the era when I first arrived. I’ve always been drawn to the cold and yet I also consider myself a beach person. I went from one side of the country to the other and ended up in the middle,” she says.

“Walking around town on the side streets with the snow coming down, it was so peaceful and quiet, even though the tourists were raging over on Elk Avenue,” she chuckles. “It’s really important to me to have family here. I love being involved with the UCC [Union Congregational Church]. It’s another part of the family for me. I feel so welcomed coming back even though I was gone for so long. I don’t ever want to leave again. At this place in my journey, I just want to live here.”