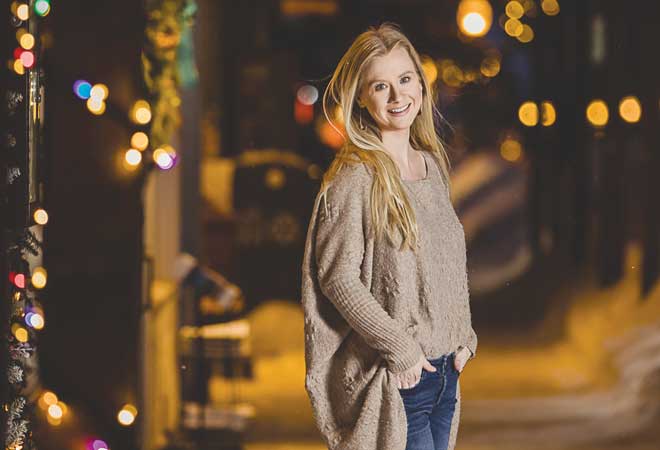 Jenna May had taken ballet in her early youth, growing up in Dallas, Texas, but her flair was more toward gymnastics, to which she spent the better half of her life, from the age of five, dedicated. Her years of discipline in the sport are apparent in her poise and gracefulness as she crosses the room, coffee cup in hand.

The life of a serious gymnast is extremely structured, with levels of accomplishment setting the pace. Jenna was talented enough to be encouraged to take the next step. “By the time I was in second grade, my coaches said I should pursue gymnastics at a pro level. I’d have to be home-schooled because of the hours of intense training spent in the gym,” she says.

She recalls the grueling practices, spending four to six hours daily, six days a week, in the gym, and oftentimes on Sundays. Jenna did floor work, balance beam, vault, and the uneven bars. The skin on her hands would rip from the hardened, thick calluses, a common injury and occurrence for gymnasts. Her mom would shave the calluses down with a flat razor blade and Jenna would sleep every night with her hands lathered in vitamin E oil and wrapped in socks.

“When you do gymnastics for years and years, you don’t have the normal life of a kid. You don’t have dinner with your family. We’d go to the gym at 7:30 a.m., break for lunch at 11:30 a.m. and then start school studies in the gym with a teacher the group had hired to work the curriculum with all the gymnasts,” Jenna says.

She regularly competed nationally. She says, “Each year the goal was to advance in levels, that means you’re required to learn certain routines to perfection. Within those levels there are skills you have to be able to do. At first I wasn’t very good in tournaments but we got this awesome, famous coach who went on to train Olympians in the States. A good coach makes all the difference. He took me to the next level and made me a great gymnast. I was getting great scores on all four events.”

To bump up her skills exponentially, Jenna’s father took her to the athletically elite World Olympic Gymnastics Academy (WOGA). “And that’s a huge deal to be a member of that gym. It’s where all the U.S. gymnasts train who go to the Olympics. All the coaches there are either Russian or Ukrainian and it’s intense on an entirely different level.”

With her outstanding record, Jenna was offered a place on the team at the age of 12 but after two years at the renowned gym, Jenna decided it was time to move on from gymnastics. She was burnt out and in physical pain and she explains, “My body hurt all the time. I started having pain in one of my knees, and then the other knee.” She was diagnosed with Osgood-Schlatter, a childhood repetitive use injury that causes a painful lump below the kneecap, and it ended her career in professional gymnastics.

In her sophomore year, she attended public high school for the first time and socialized with kids outside of the gymnastics school. She graduated in 2009 and at 17 enrolled in the University of Texas at Austin. Jenna had a path in her sight, “I thought I’d take biology to eventually become a doctor, at least that’s what I started out as. After my first year, I changed my major to nutritional sciences and graduated in 2013.”

Jenna was physically challenged by her gymnastics injuries, “I had a lot of issues with my body. I tried to get into running but couldn’t because my bones kept breaking. I had stress fractures everywhere, especially my feet.”

Because of her years of extensive training, she had developed osteopenia, a precursor to osteoporosis. Jenna was invited on a road cycling tour across the Blue Ridge Parkway in the Carolinas as a healthy alternative to running since the sport has less impact on bones. “It was a fully supported ride and was so much fun. I had just turned 18, it was a week-long tour, and that was my first experience on a bike.”

She returned to Austin and bought her very first bicycle. “Austin’s a huge biking community and I got really into it. I started riding with Lance Armstrong’s shop there, called Mellow Johnny’s. I began to meet other cyclists and started riding in groups, riding a ton of miles, doing century rides, 100-mile rides. I joined a non-profit while in my second year of college, and we trained for two years for the 4,687-mile, 12-week ride to Alaska,” which she completed with her group after graduation. “We raised over $600,000 and donated part of it to MD Anderson, a prestigious cancer research center and hospital, and part to my college for research and development.”

Jenna decided that she wanted to go to med school but felt she needed a hard-earned reboot after the massive Alaska cycling trek and the years in academia. To begin preparing, she was hired to work in patient rehab for spinal cord and traumatic brain injury. The experience was completely different from what she thought it would be and although it was hard to walk away from her plans, especially with her sense of discipline, she left after two years. She realized, “It was a wonderful experience and I learned a lot, but it takes a special kind of person to do what they do and it wasn’t for me.”

Jenna first came to Crested Butte for biking in the summer of 2010 with family and friends. “It was too hot in Texas and it’s beautiful here. I felt like this was Candyland. I couldn’t believe that people could live like this, everyone was happy, there was no traffic, no crime, no ugly billboards or skyscrapers,” she says. After that, Jenna usually returned every summer.

“I met a lot of people from all over the world while riding. I spent a lot of time in Crested Butte during the summer of 2015. I loved it here so much but Crested Butte, in my mind, was always just a vacation, it wasn’t like the real world. It’s not what I knew. I’m always on a path and I’m structured. That summer I was very conflicted. As a tourist, I didn’t know anyone and I didn’t have a job. So why would I move to a place all alone without having a plan? I was talking to my mom about it and she said this one thing to me: ‘You can plan your entire life, down to where you’re going to live, what you’re going to do, and the white picket fence, but life doesn’t always turn out the way you plan for it to. I would hate for you to wake up one day at my age and regret not having had the courage to try something new.’”

And with that, Jenna returned to Texas, packed up the car and moved to Crested Butte. “And here’s the best part: I drove all that night, and the next day was the burning of the Grump. I got reborn that night. I had no clue what Vinotok was. I made my very first flower head-wreath, went to the burning and burned my first Grump, which, at the time, was letting go of expectations, all the responsibility that I had put on myself, the fear of letting go of everything I hold onto so tightly. It was the best decision I truly ever made.”

She had gotten her real estate license while she was in Texas and then acquired her Colorado license. “I immediately started working for what is now Bluebird Real Estate. Everyone told me how hard real estate was here and I probably wouldn’t make it. I felt that I’d be good at it because I like people. I enjoy talking to them and I like helping people. The best part of my job is the people I get to meet, people from all walks of life and they become friends. And who else gets to say, ‘Let’s go ski on lunch break,’ whether it’s with a client or a local? How can you not love that and how could you go back to living the way you did before? I had never done a winter before I moved here in 2015 and that was a decent year for snow and then the next year it dumped. I wasn’t a good skier but now I do both Nordic and alpine.”

In moving to Crested Butte, Jenna felt she had left the rat race behind. “It was nice to not be surrounded by people who were always trying to outdo you. Crested Butte is not about what you have or what your last name is, it’s about who you are and that’s how I felt stepping into the community. None of those things seemed to matter; the more important things in life mattered, like your happiness. Friendships weren’t superficial. It feels like a simpler life. I feel really lucky to live here. I would have never imagined I would be able to live this lifestyle. Why would I leave?”