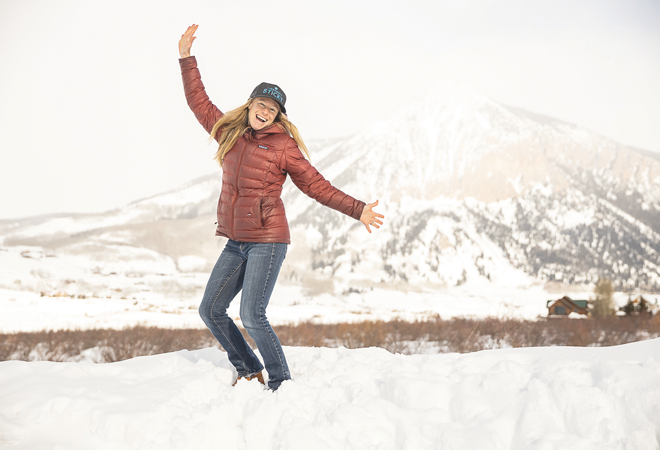 Very soon Krista Powers will walk among the newly waking trees, deep into the Vermont forest where three generations of her family have tapped the majestic maples for their sap and then transformed hundreds of buckets of it into sweet, sticky, earthy syrup every spring.

Snow is still on the ground, the nights are chilled and the treetops are leafless when the taps are pounded into the trees, but with the winter days warming into spring, the sap begins to flow from the roots, drawing water from the ground, and into the buckets to be collected and taken to the sugar shack. This is when Krista leaves her Crested Butte home and heads east to her family’s sugaring farm to produce her Vermont Sticky organic maple syrup, which she brings back to Crested Butte to sell.

Born and raised in Lowell, Vermont, Krista says throughout her childhood her entire family made maple syrup, “mostly for our own consumption and some friends, along with a few contracts along the East Coast. It was a very, very small business. Lowell is a small community in the Northeast Kingdom.” She says “Kingdom” is a term of endearment describing the northeastern part of the state, the cold belt of Vermont that’s about 15 minutes south of the Canadian border.

When Krista was a child, “We played outside all the time. My memories are of the outdoors, either playing or cutting firewood or working in the garden. I was always swimming in our pond in the summer and ice skating on it in the winter. Basketball was my passion throughout junior high and high school. As a family, we cross-country skied. On occasion, we’d go up with the school to ski J Peak.”

Krista recalls that her childhood was, “a lot of living off the land. We had a large garden. We made apple cider in the fall and put up a lot of produce from our garden, and in the spring we made maple syrup,” a life that revolved around the seasons, each unfolding in its own special beauty.

Krista attended a tiny elementary school with two grades sharing each classroom. “There were only 15 kids in my grade. I went to what was called a union high school, North Country Union High School. Because there were a lot of small towns, all the kids bused to the one school.” She graduated in 1995.

“I was excited to go to college and move on,” Krista says. She enrolled at the University of Vermont in Burlington and majored in environmental studies with a focus in sustainable international development. “I wanted to experience something other than small Vermont so I studied natural history, ecology, human history and tons of Mayan history abroad in Belize. We’d stay with local families half the time and the other half with the group,” she says of her time studying marine ecology and the headwaters of rivers that flowed into the ocean.

Krista graduated in 1999 with a B.S. in environmental studies. “I wanted to go west and explore. I wasn’t on a career track right away. I thought I’d come west for a year with no place particular in mind but I wanted a ski town.” She headed off on a two-month road trip adventure to the northwest—Colorado, Utah, California, Washington, and Oregon, camping and backpacking with a couple of friends. “We were looking for a home for the winter, particularly to ski, and Crested Butte was our last stop. We knew a couple people here and we came over Kebler pass and ended up camping on the river in Almont. It was October 10 and it snowed four inches. We got up and went to the bakery where Pitas is now. It was off-season so there weren’t many people around,” but coming into town on Highway 135 she felt the elation of seeing the snow clad mountains that surround this valley, and thought, “I want to be on top of every one of those peaks!”

At the bakery, everyone was exhilarated with the early dumpage and the prospect of an excellent snow year. Krista recalls, “There was a truck being towed up Elk Avenue by a rope and I was watching all this over a cup of coffee and I felt like I was home. And I just stayed.”

After landing a place to live, which was far easier back then, Krista started working at the Brick Oven and Mountain Colors. “I was scraping to find whatever job I could and I was teaching snowboarding at Crested Butte Mountain Resort,” she says. She had learned snowboarding her sophomore year in college with her season pass to Stowe, Vermont. “My brother taught me to snowboard, but I learned a lot more while I was working for CBMR. I still teach riding but I’m definitely a skier now. I was telemarking back then too,” she laughs about her vintage equipment, skinny 210s with leather boots. She still skis the Al Johnson every year.

After a smattering of restaurant and coffee shops jobs in 2004, Krista was hired by Adaptive Sports as a ski and snowboard instructor while also working at Marchitelli’s Gourmet Noodle, a job she held for nine years from 2005. “I started a landscaping business called Deep Rooted Gardening in 2010. I loved gardening. I grew up loving it, and I wanted to be my own boss. I was gardening by day and working Gourmet Noodle at night. Then in the winters, I was at Adaptive and Gourmet Noodle. When I decided to start Vermont Sticky in the winter of 2016, I stopped landscaping to focus on the syrup business.”

She had been sugaring since she was “knee-high to a grasshopper,” she laughs, and adds, “It had been something I had been talking to my dad about for years.” With her father’s blessing and encouragement from her husband, Dodson Harper, Krista went for it in May 2016. “It’s pretty fun that I get to do this with my family. I feel so lucky that I’ve been able to learn the art of sugaring from my father and grandfather.”

Krista’s grandfather, Archie, started the family business in the 1950s and Krista’s desire for Vermont Sticky is to bring new life to an old tradition.

“Our world is clamoring for healthy alternative sweeteners. Maple syrup, besides having an earthiness of flavor, is an unrefined sweetener—it’s not processed and bleached like sugar,” explains Krista. Even organic sugar is still processed. Maple syrup is low on the glycemic index, lower than honey, and it’s full of naturally occurring vitamins and minerals. It’s the healthiest sweetener for cooking, baking, and all sweet cravings. Sugaring goes back to the Native Americans, when, in the spring, they’d put a slash in the tree and collect the sap. It would naturally evaporate, and render like a hard sugar and they’d use it in cooking and as a trade commodity. The natives passed their knowledge on to the white settlers.”

Krista’s Vermont Sticky is a single-sourced product, meaning it goes directly from their farm to the consumer. “We have a forester who comes out and checks our forestry, making sure that we are tapping our trees in a sustainable way. To be certified organic, there are very specific rules. Even when I was young, Dad would only tap larger trees, never from a sapling.”

The tapping starts in February, and depends solely on the temperature, when the days are above freezing but the nights are below freezing. It’s then that the sap begins to run. It takes 45 gallons of sap to make one gallon of maple syrup. “We’re tapping some of the same trees that my grandfather tapped,” Krista notes proudly. “We do 1,800 taps and with the bigger trees, you can have two taps in it. When I was a child, the sap would run into buckets, and we’d have to walk to every single tree, through the vast forest, 100 acres of maple trees, and collect all the buckets. We’d have a sled or sleigh and when I was too little to collect the sap, my father had me drive the tractor. I was six years old.”

The sap is boiled in an evaporator and when all of the water is boiled off, it leaves the sweet, thick tree nectar.

“If there’s a snow or it’s cold then the sap stops running. But when it’s running then you’re constantly going to the holding tanks, collecting the sap and making maple syrup,” Krista says of the labor-intensive sugaring season. The season is over by mid-April when the weather warms because, Krista explains, “As soon as the nights stop freezing, the sap goes through a metabolic change and it’s no longer sweet.”

And in case you were wondering, tapping the trees does not harm them. “It’s such a small amount of sap that we’re harvesting each season,” says Krista. Additionally, the tree replenishes its sap as the roots draw from ground water.

This past April 2018, Krista launched a new product: maple sugar. “It’s just maple syrup that’s reduced into a granular sugar and can be used in lieu of any sugar.”

One day, while biking at Hartman’s, Krista came up with a hydration concept, “to make my own sports hydration with that maple sugar and that’s when Tree Juice was born. I got the idea from my grandfather, whose generation drank a drink called Switchel. Before the farmers would go out for their day’s work they’d mix maple syrup, apple cider vinegar, salt and a flavoring, maybe lemon or ginger, whatever was available, into their water jug and that was their hydration for the day. So I borrowed that recipe but made it more accessible for today’s consumer by making it in powder form.”

She flavors her Tree Juice in lemon-lime and raspberry-lemon. The product debuted this summer at the Crested Butte Farmers Market and can be ordered on the Vermont Sticky website (vermontsticky.com). Her latest product, as of October, is hot cocoa, an instant powder mix made with maple sugar and organic Dutch cocoa.