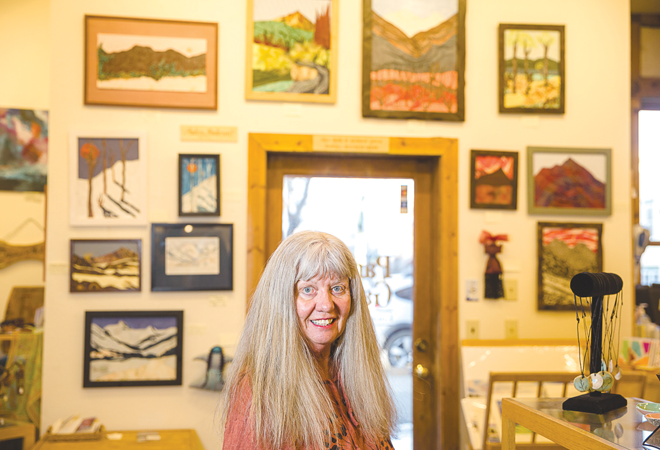 The Fabric that Binds Us

Audrey Anderson greets people with her bright smile that starts from her eyes and lights up her whole face as she tends to visitors coming into the Paragon Gallery, Crested Butte’s oldest coop of artists.

Many of the guests are tourists just passing through or passing time, waiting for the Mountain Express bus to shuttle them up to the mountain. Some are locals dropping by to catch the latest guest artist or just to say hi.

Above the door hang several of Audrey’s fabric art canvases, colorful composites, collages of landscapes reminiscent of The Beatles song lyrics with fantastical flowers and marmalade skies, or paisley trees and muted mountains of lavender shades—layers of colored fabrics, bits of lace and texture that present a surrealistic view of local scenery as interpreted by the artist.

Although she always dabbled in art, Audrey’s dream of dedicating her time to creating is finally manifesting, but it’s been a long journey to finally make it a reality.

Audrey was born in Ypsilanti, Michigan, where her parents met while working at an airplane plant during WWII. “I grew up in a tiny tract home,” Audrey says of the close quarters of employee houses individually enclosed by picket fences. “I came from a family that I always thought was German because we ate a lot of German foods, like kraut, boiled dinner, sour salad, and pork and lots of veggies that were boiled forever—but a DNA test resulted in a surprise. I’m mostly Irish and Scottish,” she says. She then immersed herself in the history and studies of her newly discovered Celtic heritage.

Audrey developed a love for the outdoors at an early age when her family would travel to Sage Lake in Michigan. “Mostly, I swam and went fishing. I grew up fishing, going with my grandparents in their little rowboat with a motor stuck on the back. I loved it up there. There was no plumbing. We had an outhouse and a bucket for nighttime. Those were good days.”

“I liked school,” she admits. “I always liked learning. I especially loved math and science. In high school, it was college prep all the way—study, study, study, from the ninth grade on. My mother pushed advancing so I could get a scholarship because I was always told there wasn’t any money for college.”

Audrey graduated from high school in 1967, and at her very young age, she was already engaged to her high school sweetheart and carrying their child when she started college as an art major. She had to leave after the first semester when their son, Brian, was born in January 1968. She worked various jobs, from hospitals to offices, doing mostly accounting. Their daughter, Jennifer, came along in 1971. Audrey’s husband became a police officer. “Cops have a lot of fun,” Audrey says and adds that they managed to go dancing every weekend. After 13 years though, they decided to dance their separate ways.

Audrey learned to ski, the love of which would take her to steep places and eventually land her in Crested Butte. “I started living the ski bum life,” she says of her post-divorce, “skiing every weekend at Crystal Mountain, a little resort area around Traverse City, hanging out with the National Ski Patrollers at the area.” Audrey began dating one of the patrollers and a year or so later she was a National Ski Patroller herself, heading west yearly to various resorts in Colorado with her patrol clan. She fell in love with the mountains.

Meanwhile Audrey went back to Eastern Michigan University (EMU) to finish her degree in accounting. When her ski patrol boyfriend, who was also working for Ford Motor Company, was transferred to Phoenix, Audrey went with him, enrolling at Arizona State University. However, he was transferred again to Toronto, Canada, and Audrey went along, commuting the five hours to EMU and staying the week in Ypsilanti. She went directly from her undergraduate program into a master’s degree program, earning her MB in accounting and finance in 1988.

Once again single and free, Audrey was living in Ann Arbor and back on ski patrol where she met and eventually married another ski patroller in 1991. The couple moved to Crested Butte in 1998, having visited a few times beginning in 1989. “Every year I came to Colorado to ski, I’d grab newspapers to start looking through the employment ads for work. In summer of 1998, my husband got a job with CBMR.”

They sold their house in Michigan and moved to Crested Butte that September. Audrey also started working as an accountant for CBMR. The following winter, she started her own accounting business, Butte Books, and remained in town for a couple of years after she and her hubby split in 2002. Even though she loved it here, her thoughts turned to making a decent living wage, which she imagined she could do in Denver.

Packing up in 2005, she moved there and then Dillon the following year, commuting from Dillon to Golden for work for Intrawest, doing their books for the Winter Park ski resort. But the commute was tiring, so Audrey took a job in Frisco as a controller for a construction company.

She was still visiting Crested Butte on weekends and had made friends here. In the fall of 2006, she decided to move back to Crested Butte because her Butte Books accounting business was making more money than working for someone else in Frisco and it’s where she wanted to be. Among her many clients was the Crested Butte Center for the Arts (CBCA), and she enjoyed the work. “I like operational accounting where you help a business look at where their revenue comes from, where their expenses come from, and how they can improve their bottom line,” Audrey says, “as opposed to income tax accounting that’s constantly changing because of laws in the government.”

Audrey grins, “And all this time I was skiing like crazy. I love skiing.” It was love of the outdoors that put her together with long-time local Eric Davis, aka E.D., in 2008. “I already knew E.D. from meeting him in 2000,” she says, but once they were together, the couple began exploring together. “We just started living a life filled with adventure. We went to Nepal, Mexico, and we’ve traveled around the southwest,” she says of road tripping in their 16-foot trailer RV with a big Irish setter and a golden retriever in tow.

“E.D.’s an avid skier and adventurer nut,” she laughs. “He takes me to the top of peaks. We hike and ski a lot—we ski until we can’t ski anymore. I could easily live someplace where I could ski all year. I prefer it to hiking because it’s easier on your body.” The two live in the tiny and infamous “air conditioned house, 420 square feet!” Audrey grins.

Audrey says, “I’ve dabbled in art throughout my life. There was a time in the 1990s that I was making my own paper, 3D masks and painting. I had taken a watercolor class but never did anything with it,” but she laughs, “I love ordering all the supplies. I wanted to be an art teacher and make art. I had an art teacher in high school who really inspired me and was a real supporter of mine.”

Her almost-full-time foray back into creating the art she loves began with Vinotok. Her first art show was at the Crested Butte Heritage Museum in 2013, where her Vinotok-inspired “Spirit Dolls” intrigued visitors with their primal and colorful aspects and stemmed from her role as costumer coordinator for the beloved local event.

Having made costumes for some of the principal Vinotok players, Audrey had another revelation. “I had all these scraps and didn’t know what to do with them. It dawned on me that I could paint landscapes that I love with the scrapes of fabric,” which was the beginning of her fabric art creations.

“The nature aspect of Vinotok is very important to me because it’s my church,” Audrey smiles. “The church of the great outdoors, the change of the seasons, how we’re spinning around the black hole in the center of our galaxy, moving through the universe. I try to put into my paintings the feelings I have when I look into this amazing world around us, the wilderness around us.” She expresses the importance of her Vinotok tribe, where she gets to live out her role and Vinotok character every day as the Elf Witch: “She is a being from the Other World, sent here to remind humanity that the world is our Mother.”

Audrey made full use of the multitude of classes offered by the Crested Butte Center for the Arts, from watercolor technique to drawing and jewelry design classes. Last August, her art was featured in her own show at the Piper Gallery in the Crested Butte Center for the Arts. “That really got me going. It gave me the courage to apply at Paragon Gallery.”

This past September 2018, Audrey was invited to be one of the permanent artists in the Paragon coop. She says, “I’m so honored to be a part of that group.” She’s also now the full-time accountant for the Crested Butte Center for the Arts and takes pride that in the past three years she implemented a cost accounting system. She explains, “Instead of simply having an income statement that tells what your income is, I designed a system that tracks profitability by event.”

Audrey feels that she doesn’t want to be anywhere else. “I can’t live anyplace else. I’m rooted here in this wild country. This place is so much more than a couple of towns, a Nordic and downhill ski area, or a plethora of single track. This place is still small enough that I feel connected to many folks I see on the streets and in the wilderness. There is a Tribe here, a Tribe with many members. All are welcome. All contribute. All have respect and love for one another. We are family. That’s why I’m here. Plus, I LOVE winter. It is long and phenomenal. I also love the challenges of living here, of finding good healthy food, canning and freezing, making almost everything from scratch, even corned beef, learning to repair or reinvent things, gardening, even shoveling roofs. At 69 years old, I feel so alive, so free to live a life filled with challenge, excitement, peace and contentment.”