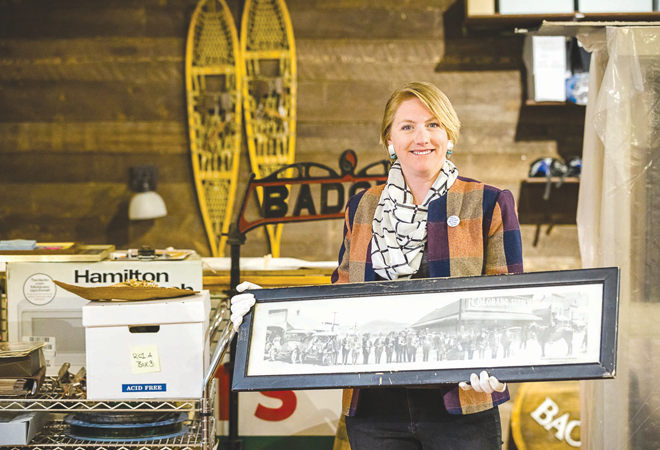 “It’s a dusty Four Corners kind of place,” Nel Burkett says of her hometown, Cortez, Colo. Her two brothers were a decade older than she was, so she felt that she grew up essentially as an only child. “However,” she laughs, “I was nevertheless picked on by my siblings.”

Her mother, whose family had homesteaded in Sterling, Colo., met her Texan-Arizonan dad at Ft. Lewis College in Durango. Nel realized what she admired about Cortez, but not until after she left.

She says, with a touch of pride, “When you’re growing up in any town you come from, you don’t know what’s good about it until you leave. I think back on it a lot now and know that it really it was a great place to grow up. It was kind of wide open. There’s always something to do whether driving around with friends or doing sports and activities. I grew up playing soccer and was on the swim team. It was an all-American western town. I was in all the school plays and at one point, I quit swim team, which I loved, so I could stage manage The Odd Couple.”

Nel graduated in 2008 with not a clue about what she wanted to do.

At the time, Obama was running for president and Nel felt the excitement of the political climate. “I had originally signed up to be a history major at Western State [now Western Colorado University, WCU] but I got into politics and government as well as philosophy. I had been to Gunnison once before for a swim meet and wandered through the campus. WCU seemed like a smaller school with lots of opportunities. Gunnison reminded me a lot of home, especially with its similar types of people.”

While she attended college, Nel became involved with the creative writing programs and the poetry club, taking part in a sampling of activities, trying new groups and sports, and getting back into some of her old sports. “My dad is an avid fly fisherman. I grew up hating fly fishing because he always seemed to take me along when it was the coldest, with snow on the ground and half the river would be frozen and it’s hard to tie knots when your hands are frozen,” she laughs but shivers with the memory.

“In college, though, I picked fishing back up because I knew just enough to be able to go out on my own and wave a stick in the air. I certainly fish more than I used to but I’m certainly not any better at it,” she grins. “It’s fun to have something you can do by yourself that takes a whole day and makes you slow down.

“Part of my time at WSU was working at the Palisades, a restaurant and saloon. Working there as a waitress forced me to grow as a person and get out of my shell, to learn how to take to charge of a situation, how to think on the fly, and how to not take things too seriously. I made great friends there that I still have today,” Nel says of the job she stayed at intermittently for more than five years.

A couple of years into college, Nel had decided that she didn’t want to be a teacher—she had thought that was the likely path to follow with her degree. Instead, she considered where she liked to spend her time. “I knew I always enjoyed visiting museums, particularly history museums. Being in the physical presence of history had an impact on me.”

In 2010, during her junior year of college, she called the Crested Butte Heritage Museum to apply for an internship. “I wanted to learn how museums work and see if I could create a career out of that. One of the first things I did at the museum was data entry, dealing with the artifacts of people’s lives and creating records for those artifacts. When you catalog something, you really have to get into the piece, you have to really look at it, and that makes you interact much more closely with the piece.”

Nel points to a donated panorama photo that lies framed on the table in front of her. It depicts an Elk Avenue street scene taken on the Fourth of July in 1917 and portrays the Crested Butte Concert Band. Old-time original Crested Butte family names from the town’s mining era are represented in the line-up of music men, every one of them standing proudly in their parade best with their instrument—tubas, trumpets, trombones and other brass horns. “Nicolas Reti taught me to consider the person on the other side of the photo, the photographer,” Nel says of looking beyond the image for more of the story. “People here have taught me different ways to look at historic items.”

As an intern, Nel began interacting with the local history and through that, the wider community that she feels she wouldn’t have had the opportunity to experience and know otherwise.

“From a historic perspective, as I spent more time working here and getting to know the community and the people who make their lives here, you really get to know something like this photo much more in depth. For example, as I learned more about the Rozmans and Kochevars and the role they play in the community and our history, this photo takes on another dimension because you’re seeing these people interacting with their history.

“What I also love about this photo is that when you really start to think about it and become familiar with our history, it becomes obvious how important music is,” Nel continues. “This picture is an example of that. You’ve got many different aspects derived from this particular photo, like how the landscape has changed, how buildings have changed or stayed the same, and this part of our culture that continues to be important today, the music and, of course, parades.

“We love parades! You start to get to know these men in the picture with their instruments. These guys who are making two or three dollars a day working in the coal mine and we’ve got a full brass band here so they’ve invested into this. You can see what’s important to them. Every fraternal lodge in town had a band. That makes Flauschink one of my favorite events because it embodies that spirit that these folks set up a century ago. In the first early Flauschink celebrations, you had one old-timer and a newcomer as a King and Queen so it would bring those two worlds together. And I love that idea,” she says.

Nel graduated in December 2012 and moved to Mt. Crested Butte in 2013. In addition to working at the museum, she also worked at Rumors Tea and Coffee House for about five years. “It was a busy summer that year of 2013. I was still working at Palisades, Rumors, and the museum and I ran two half-marathons,” she laughs and confesses, “I hated running. But I had a friend who got into running and we were already hiking buddies. We’d hike up and run down. Running downhill worked for me,” she grins. “It eventually turned into running uphill too.”

She runs randomly now but managed to do the Thanksgiving Turkey Trot, the 5k hosted by Griggs Orthopedics.

“I don’t ski so much anymore. I grew up skiing Telluride. I’m at that point where I have to get better to keep having fun and with that comes all the gear. Mostly,” she chuckles, “I’m a pro at shoveling snow.”

Currently Nel is working on her master’s degree at WCU in gallery management and exhibits specialization. She’ll graduate in the spring of 2020. “This community deserves to have their history presented well and shared the best we can, so part of the decision to return to school was to learn how to be better at my job.” She’s now the full time collections manager of the Mountain Heritage Museum.

“Really, the most important thing I’ve realized from my time here is learning how personal history is. The history of the Gunnison Valley is not like learning about the American Revolution—that story’s been told and retold thousands of times and you have more resources available. With Crested Butte history, you actually have to talk to people to discover our local history. So much of it is oral history. So when I’m developing an exhibit or writing a short article, I have to call folks and ask them and get that personal history. We’re past that point where old white guys can write one form of the story and expect that to be the end-all be-all, the complete story. History belongs to the community, so because of that you’ll get different perspectives and memories. All of them are valid, all share an insight that you can only get by hearing all the various points of view.”

Nel met her boyfriend and local favorite, Alec Lindeman, while she was working at the museum and, she grins, “He was doing some forced volunteering. We had a long conversation and none of it revolved around skiing. I was tired of trying to guess what the random gear was that all these boys were bragging about at the bar. I had no idea what they were talking about. It wasn’t until Soul Train that I made a move and we’ve been together ever since.” That was 2014, “And we still love Soul Train,” Nel declares of the beloved annual KBUT fundraiser event.

“The weirdness keeps me here,” she laughs. “The people like Nick Hill who builds his cool bicycles and the Red Ladies who ski to the top of Mt. Emmons in full regalia, and the Vinotok friends who thrive off of being wild. It’s hard to put into words. The only thing that can kick me out of this community is not being able to find an affordable and comfortable place to live. Right now I feel lucky that I have a place. My parents asked me if I would ever go anywhere else and I tell them, where else can you go and wear a weird costume on most days out of the year? We all love to complain but we all love to love each other too as a community. It’s always about the community. I love that I can sit out on the front bench at the museum and see so many friends and acquaintances walk by, just like Tony Mihelich and the old timers used to do. Some things never change.”