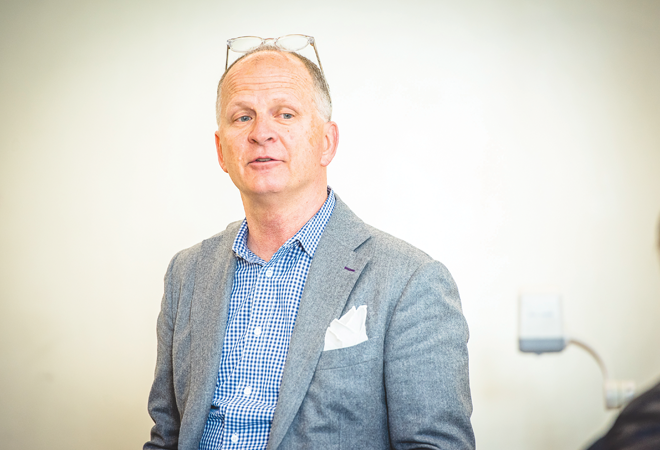 Waking up in paradise

“I love living in a small town,” smiles Tom Miller, a Texas transplant with an appreciation for real community. “I love community. I love building community and being a part of community. I’ll admit to being the stereotypical Texan. I know how that rolls, but I’m not ashamed of it. If you’re going to be about community then you are who you are, and I am who I am. And let’s figure out how to do life together,” he says as one who has reached through barriers, resolved conflicts and built friendships.

Tom was born in Nebraska to a farming family. His mother was a small-town Nebraska girl and his father was in Reserve Officer Training Corps (ROTC). The young family moved to the Dallas-Fort Worth area when Tom was only two years old.

The four sibling brothers had similar interests, says Tom. “We were a big sports family, baseball and football, all through high school. It really shaped our family. I was the oldest and we were effectively raised at ballparks. Mom never missed a game and dad coached,” he says, affirming that he was basically a good kid. “There are no high school yearbook photos that would incriminate me,” he grins. He graduated from a Waco high school in 1979.

With sports such a prominent part of his life, Tom thought he would become a football or basketball coach. He enrolled at Baylor University as an education major with a sociology minor, and graduated in 1983. He coached and taught physical education at Grapevine High School in the DFW area for three years, during which time he married his college sweetheart, Catherine Coyle, in June 1983. Their first son, Ben, arrived in 1989 and their daughter, Elizabeth, in 1991.

Tom had always had the mindset of an entrepreneur. “I had a paper route when I was 11. When an ice storm would hit Dallas I’d go grab my father’s chain saw and go door to door to clean up the trees. In college, I owned a used car dealership,” he says of the origins of his first professional endeavor. To get a used car sales license at that time in Texas, he says, you had to pay $50 for an auto dealer’s license, and had to have a phone, a parking lot and a sign.

“I had my home phone and my house was next to a Pizza Hut parking lot so I took a Polaroid of the parking lot facing my house, so they couldn’t see the Pizza Hut and put my ‘A-1 Auto’ sign in my house window, sent the $50 check in to Austin and prayed it wouldn’t bounce.”

Back in those days, Tom says, the word “entrepreneur” wasn’t used. It was more “I need money.” And he didn’t have any to start up a business or to buy cars at dealer auctions, so he donned his suit, bought a Parker pen and a notebook to make himself look like a seasoned businessman and headed to the loan departments of several banks in Waco.

Tom says, “I went to five different banks and all of them smiled and said no. I widened my circle and went to Riesel, Texas,” where he knew the sons of the guy who owed the bank and the banker knew his father. “He lent me the $5,000 and I was in business. For two years, I bought and sold cars. I ended up getting through school and paying off that loan but I knew I didn’t want to do that the rest of my life. It was just a means to get me through school. My strength was in ideas and the execution of ideas.”

The last car he sold was in the fall of 1982. “I had to sell a car to buy Catherine’s engagement ring,” Tom grins proudly, “so I tease her that she’s wearing a 1974 yellow Ford pickup with a gooseneck hitch in the bed.”

After his coaching job, Tom decided to take a sales job selling training packages to corporations, which entered him into the business world. “We sold packages—video tapes and print-base training for certain trades,” he explains. Two years later he was working sales with a large company, Balfour, selling recognition awards to corporations. “And that’s the business I ultimately left to launch my own company in 1991, Symbolist. We worked with corporations in employee engagement, selling systems and technology and recognition awards. In more than 25 years, the industry changed from awards, rings and plaques to creating solutions for employee engagements.”

In 2009, Tom opted to deepen his expertise for his company, and while waiting at LaGuardia airport for a delayed flight, he picked up an Economist magazine and what unfolded was a back-page ad for an intensive international program run by two schools, HEC in Paris and Oxford in England—Consulting and Coaching for Change. He signed up for the master’s degree program and spent six weeks at each university over the course of 18 months.

“It was designed for people who worked,” Tom says. “It was a wonderful experience and it did exactly what I wanted it to do. It broadened my perspective in culture, on why people do what they do, and gave me a better perspective on how people from different parts of the world really think.” He graduated in 2009 with an MSC, basically, a master of science degree. “It was life-changing for me and it was cool to go back as middle-aged and do that sort of work.”

Tom had been in many university classrooms as a guest lecturer, and he felt it was time for a change. “I like working with young people and I like teaching. I had taught in Iraq and spent time in Kurdistan. I have training in conflict resolution. I was invited by the Kurdistan government and gave a lecture to their faculty on conflict resolution at Duhouk University. Kurdistan has very tight ties to the USA and they are very pro-American. At the time, the security was tight but not restricted in 2011, so I could leave the hotel and go for a walk. I felt safe and it was very safe then. Northern Iraq was far away from the turmoil. Now it’s not.”

That same year he also went to Afghanistan. “There’s a really cool organization called the Institute for Leadership Development. They work inside of Afghanistan, working with locals, training them in a nine-month course. These people are just like us, but oppressed, and they can’t get out. I just wanted to teach students and help.” Tom has taught across the globe.

“About 2012, I decided it was time to make a real transition. I was done. I was tired of running a company. It was really hard to walk away and it took a couple of years to jettison from my own company, but I got it done and I’m very happy that I did.” He felt the need to find his purpose and turned to the idea of being a college professor.

“I had actually been a guest lecturer at Western Colorado University [WCU] around 2013. I talked to schools where I thought I’d be a fit, where smaller classrooms were prevalent. Talking for 50 minutes off a PowerPoint deck is not the way I teach,” he says.

In 2016, Tom chose to teach business at WCU. “I teach marketing and I’m director of the professional selling program. Research shows that 80 percent of marketing majors will go into sales right out of college, and 40 percent of business majors will have a selling role right out of college. What’s happened is that more progressive business schools are beginning to teach professional sales. I’m very grateful to Dr. Pete Sherman, dean of the business school and Dr. Greg Salsbury, president of WCU, for enabling and supporting the program,” he says of the brand new curriculum.

“We’re now placing graduates into Fortune 1000 companies. It’s a brand new channel of career opportunities for our students. I think this is the most important work I’ve done,” Tom says.

Perhaps in a new paradigm, Tom feels business school students are now shaping their perspective on who they are and what a career looks like for them, thinking culturally and holistically. “They’re looking at a career instead of a job,” he says. “It’s nuanced but I think a very important nuance. We’ve got eight major companies visiting WCU this spring for recruiting. We’re in national publications that write about our students now. Western gets to stand on the stage with the big schools but we’re a small school and I’m proud of who we are. I think our students are great and this program gives them a chance to compete for the same career positions as students from CU, CSU and other big schools.”

Tom’s wife, Catherine, flies back to their other home in Texas every two weeks to manage their other business, a co-working space called The Lift Office, which Tom defines as, “A temporary office, a drop-in and work—it’s a rent-a-conference room [theliftoffice.com].” But the two are never apart for more than five days, he notes. The couple didn’t just happen upon Crested Butte. Tom’s family had discovered it when he was in college and the rest of his siblings were still living at home.

“The only time we had to take vacations was at Christmas and Mom and Dad decided to make it a family ski trip. It’s a pretty classic Texan story, actually,” he laughs. “We found Crested Butte accidentally, going to other ski resorts first. We ended up here because a friend of a friend referred us to this place. We always stayed at the San Moritz. Over time, as Catherine was added to the family, she and I enjoyed skiing up here so much that when we had children, we wanted them to grow up skiing here, too. Christmas up here was all they knew growing up. We still gather here at Christmas now.”

In 2013, they bought a house on an alley in town, the decision made when they sat down on the front steps to get a feel for the neighborhood. Tom recalls warmly, “It was not more than 45 seconds and Jen Nolan rides up on her bike and says hi.” What ensued was a 15-minute conversation extolling the wonders and joy of alley living and Tom and Catherine felt they were home.

Having lived here for awhile, they now feel even more enchanted by their chosen community. “It’s where I work and I love the community and the diversity of its thinking. We all have a personal lens and my lens, coming out of urban Texas, it’s like looking through a kaleidoscope here—the individual perspectives, the community collective, in this little valley, even in this alley here, you’ve got renters, owners, a world-class mountain guide, the typical Texans, the new young family, all the different people working through all phases of life. I like that. It’s interesting, fun and different for me. This home here is intimate. We can see life going on. I can wave to my neighbors. And if you want to meet somebody for dinner, you walk three blocks or hop on your bike. I love living in this small town.”