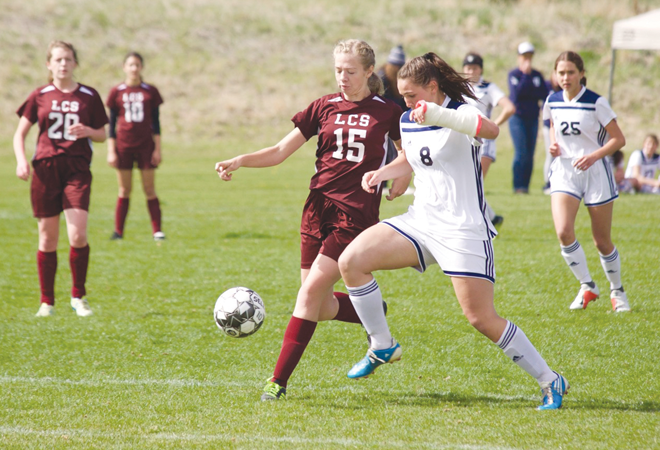 “This year we have a much better mindset”

The Crested Butte girls soccer team crushed Loveland Classical 8-3 in the 2A state quarterfinal match on Friday, May 10 and the team is headed to the state semifinals this week for the second year in a row. A win there will send them to the title game at Dick’s Sporting Goods Park on Tuesday, May 21.

The Titans opened the state tournament with a resounding 5-1 win over Thomas MacLaren and they kept their scoring ways against Loveland Classical.

Questions swirled about Loveland Classical. While scoring stats online showed that Loveland was susceptible to giving up goals, they had also amassed a record of 13-2 and faced several Front Range opponents throughout the year.

“It looked like they had a pretty weak schedule and had lost to Dawson 9-0 so I thought it was a game we could win,” says head coach Julia Kidd.

As a result, the team was confident but nervous heading into the quarterfinal game.

“We were a little nervous but we knew we could compete,” says senior center back Siena Truex. “I think we were feeling strong and went in with the right mindset.”

Any nerves were soon quashed as the Titans went on the attack immediately and scored their first goal six minutes into the game as Tess Fenerty slipped through and scored off a pass from Karina Davalos.

“We’ve been working on coming out strong the first 10 minutes and they started faster than we had before,” says Kidd.

Davalos then scored in the 23rd minute and Rachel Potoker followed that with a goal in the 32nd minute to put Crested Butte up 3-0.

Kidd put Phaedra Vierling on Loveland Classical’s top scorer and she held her in check, but their hot-shot player broke loose once and finished to cut into the Titans’ lead.

“Phaedra was on her and just irritated her the whole time,” says Kidd. “But she’s so lethal and fast that if she gets a chance, she will finish.”

That was a mere blip in the first half though, as the Titans scored two more goals to take a 5-1 lead into halftime. Kidd admits that sitting on a four-goal lead at halftime made for some interesting energy during the break.

“I’ve never had a weirder halftime,” says Kidd. “I was thinking, ‘Do we back off? Is there a mercy rule in the state tournament?’”

But state is state, and Kidd and her team kept the throttle pressed through the second half. Some line-up adjustments and substitutions allowed Loveland Classical a little more room in the second half, but Crested Butte kept on scoring as Fenerty tacked on her second goal and Davalos netted two for a total of four goals as Crested Butte closed out the 8-3 win.

“Tess, Rachel and Karina have really figured out how to work well together,” explains Kidd. “Our defense is covering each other well, communicating well and distributing the ball rather than just kicking it out of bounds. It was just a complete game and they pushed the whole game.”

Crested Butte now returns to the semifinals in Denver to face Dawson, just like last year. The hope is that with a little more experience from the past year, more confidence this year and a more cohesive attack, they may be able to punch their way through to the finals this time around.

“Last year we didn’t have the intent to keep going,” says Kidd. “This year, they’re expecting more. I think they’re ready and all we can do now is play.”

“This year we have a much better mindset,” adds Truex. “We’re happy to be there again and we are more sure of ourselves, rather than thinking it’s a fluke.”