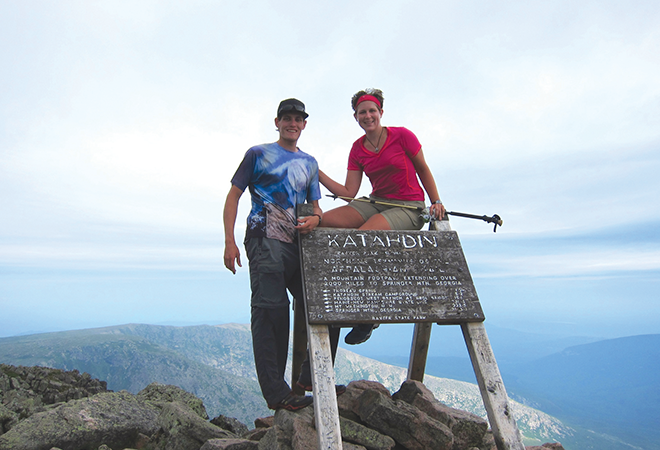 Ashley UpChurch is all about community, which has been an ongoing theme throughout her life. She grew up in Raleigh, N.C., playing a lot of sports, from soccer and softball to basketball, volleyball and ultimate Frisbee. Horses were her fascination and she was able to get riding lessons in exchange for working at a barn and a veterinarian’s office. Her family would often go camping in West Virginia at a state park that rented cabins with electricity, a gas cook stove and a fireplace for heat. “I would spend all day at the barn where I’d groom and feed horses and they’d let me do trail rides for free,” Ashley recalls with a smile. She says she still loves horses.

Confessing that she felt awkward in school, Ashley joined the marching band because, “I liked the family that the marching band provided. We could all just go hang out in the band room instead of being awkward everywhere else in school where the cool kids were.” She played saxophone in the band throughout high school but laughs, “I was never very good and I could barely keep time.”

Ashley graduated from high school in 2005 and says that she had no idea what she wanted to do. “But I knew that I needed to figure out a way to pay for college so I got a scholarship at East Carolina University in Greenville to be a middle school language arts teacher in North Carolina. I didn’t want to be a teacher—that wasn’t the impetus to get that scholarship—I just wanted a way to pay for college,” which was a financially logical decision that allowed her to graduate with a bachelor of arts degree in middle school language arts and led her to her first teaching assignment in Colombia, South America.

“I wanted to travel and it’s really easy to get a teaching position outside of our country. It was amazing, and serious culture shock,” Ashley says. “I spoke no Spanish but I learned quickly. The school was bilingual and the kids are taught English from elementary school, but if a child transferred from another school, then they hadn’t been taught English. It’s hard enough being able to communicate with kids but additionally there was the language and cultural barrier and it was my first year teaching. I didn’t know what I was doing but I had a lot of fun,” she says, although as a 5’11” blonde woman, it was annoying when people continually called her “Barbie” in the streets.

While she was in college, Ashley studied abroad in Finland for six months, “from September through December, which is not the time to be in Finland,” she laughs. “It was so dark. But I got to go skinny-dipping under the Northern Lights, above the Arctic Circle, and it was magical. You do this after you take a sauna, so it’s a cold plunge.”

Back in North Carolina, she returned to her college job as a summer camp counselor, teaching horseback riding and guiding raft and backpacking trips in the Blue Ridge Mountains. She returned to her camp position every summer for eight years. During one spring, she hiked 500 miles of the Appalachian Trail from Georgia to Virginia and in 2011, she took a teaching position in Raleigh for two years.

Ashley met Daniel Kreykes at a party in Brevard, in the Blue Ridge Mountains. “Prior to the party, I had a huge crush on him at camp where we both worked, but I got to camp late that summer and some other girl claimed him,” Ashley laughs. “Our first date was a local hike that I had done many times and Dan said he could do it from his house. He told me it was three miles to the top of this mountain, but it was actually six miles one way to the top, and our life has pretty much been like that ever since,” she says. They hiked the Appalachian Trail in 2014, starting in Maine and hiking south to North Carolina, completing the 1,700 miles and four months of trekking together. At the end of the trail, two days later, they were married.

“We had already quit our jobs, we didn’t have an apartment, and all our stuff was in storage. We knew that if we were going to move somewhere, this was the time. I had always wanted to live in Colorado for an embarrassingly silly reason— in fifth grade, when you learned what all the state mottos are, I remembered it was ‘Colorful Colorado’ and as a kid, I thought it was a state of rainbows. As an adult, I thought, I wanna go live in that place that as a kid I thought would be really cool. Dan was totally down to move there because he’s a hiker, skier, kayaker, mountain biker and climber.” Dan was looking for ski instructor jobs while they were still trekking.

The couple knew they didn’t want to live on the I-70 corridor or, Ashley smirks, “work for Vail. We’d heard of Aspen and Telluride, and Dan applied at those and a couple of other independent resorts.” Still on their trek, Dan had to run six miles to a town where he could get cell service for a phone interview with Crested Butte Mountain Resort, which offered him the job.

They arrived in Crested Butte in early December 2014. “We had to live in a motel in Gunnison for the first month because we couldn’t find housing up here,” Ashley recalls. But they finally found a home in Crested Butte South, where they’ve been ever since. Ashley took a job at Pooh’s Corner.

“I loved working at Pooh’s. The summers were a little tough, exhausting, as all retail in this town can be. I do love kids. I loved being a camp counselor and there were aspects of teaching that I just adored and were fantastic.” She “played” at Pooh’s for a year and a half before being hired at the Crested Butte-Mt. Crested Butte Chamber of Commerce as membership and marketing coordinator. She grins, admitting that the day she applied for the position, she had to ask Google what a chamber of commerce was. In May 2017, Ashley became the executive director of the chamber.

“I love it and working for these small businesses, especially when I walk into any of our stores and see that they’re succeeding. I love helping people succeed with their dreams. That’s really what a small business is, it’s your dream. The thing I like most about my job is the community. It’s been a theme in my life. I loved marching band and summer camp because it gave me a community. And teaching too, my kids were my community and we’d do all kinds of stuff together. My favorite thing on the Appalachian Trail was the trail community, the trail family.”

In their chosen community at the end of the road in Crested Butte, Ashley feels the draw of the mountains. “I love hiking with my husband and my dog, Jake. Learning to ski on this mountain as an adult is terrifying,” she admits. “I like skiing although it’s not my favorite sport but you gotta do something in the winter. I’m learning to Nordic ski. Mostly, I’m a hiker and I’m trying to complete all the trails in the Gunnison watershed. It’s called Trail Quest and it’s an app designed around mountain biking that the Tourism Association developed.

“The challenge is to ride all of the single track in the watershed. The perimeter is from our side of Monarch all the way over to Paonia and from Schofield Pass, 401, all the way to the Hartman’s. That’s what I’ve been focusing on since I’ve been here. I’m also learning to mountain bike. Before Trail Quest came out we were trying to hit every peak that you can see from town. We love to climb mountains and Teo and Whetstone are my favorites for views in the area.”

Ashley’s quest and the importance of community is a priority for her. “The community keeps me here. I love the people and how they embrace each other and it’s just so much fun here. And we still have so many mountains to climb,” she concludes.