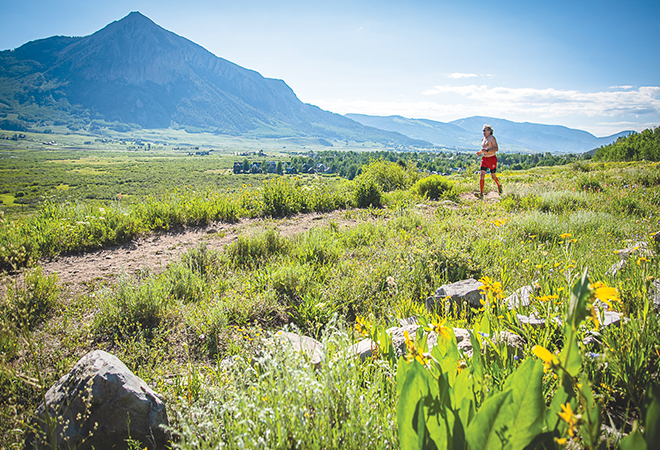 “Everybody knows me by ‘Ski.’ No one knows me by Dan and no one forgets my name,” grins Dan Zeroski. “There’re a lot of Dans in town.” In a snow resort town, you might think he got his moniker from being an outrageous skier and although he could be considered a senior über athlete, the name is a condensed version of Zeroski, which, he says, “I got before I learned how to ski.”

He grew up in the first town on the underground railroad stop in Ohio—it was on the border of West Virginia where slavery was legal and in Ohio it was not. His parents owned a bar and restaurant after his dad quit the coal mines. Ski has a fraternal twin brother. They were two of five kids. His early life was riddled with health issues. “I had pneumonia when I was two and because of that, hardening of the lungs.” He doesn’t actually remember that he had been pronounced dead as a toddler and the priest administered last rites, nor does he know how he miraculously survived. “I guess I came out of it. I survived it but I always had health and respiratory problems from the damage it caused to my lungs. Once I got into junior high school I got into sports and fitness and most of the health issues went away. I had been sick all the time, had hard breathing and allergies, anything that had to do with my respiratory system.” Ski attributes the healing and better health to staying fit and “keeping my lungs strong, with aerobic fitness.”

Ski’s four other siblings also kept him from slowing down and he says of his small town upbringing, “You did whatever you could come up with. We had a 10 p.m. curfew with a siren from the firehouse but the town didn’t enforce it because they didn’t have a police force. We just did what we wanted because our parents were working in the restaurant. Part of the culture of the area was that we could get alcohol whenever we wanted. I was bartending when I was 16.”

But Ski says the effect of allowing youngsters to have an alcoholic beverage was the opposite of what you might think. In fact, most European immigrants allowed their children to sample beer or wine because it was part of the culture and therefore the children learned to drink responsibly as adults.

“When you grow up with that, you don’t really drink because you were taught responsible drinking. I still only drink socially once in a while. The communities were ethnic because of the steel and coal mines so there were Polish, German, Italian, Czech, Irish and Scandinavians. All the communities were always tight. Softball competition was big.”

Ski recalls that, like Crested Butte, polka bands were the thing. “If you go back in the early days of Crested Butte, my community and Crested Butte were similar. You had the various ethnic social clubs.”

During junior high, Ski played football, basketball, baseball and in high school he focused on football and wrestling. He graduated from high school in 1975 and he says that, “At that time people thought I was crazy for wanting to go to college because you could make $80 a day with great benefits in the coal mines and steel mills. We had a guy who graduated with our class who couldn’t read or write and his first day in the coal mines he was making more than the teachers with their college degrees.”

Foregoing the mines and mills, Ski went off to Northeastern State University in Oklahoma in Tahlequah, capital of the Cherokee Nation. “Best three years of college was my freshman year,” he leans over and laughs. He earned his bachelor’s degree in health, physical education and safety with a double major in history in 1979, and stayed on to receive a master’s degree in junior college education, graduating in 1980.

He says, “I wanted to coach so I took a teaching job at a high school in Cleveland, Oklahoma,” where he taught history and coached wrestling, but when he was offered a position to teach health and PE and work with the Oklahoma State Wrestling Team at Oklahoma State in Stillwater, he jumped at the opportunity. While he was there for three years, he also earned a doctorate in education, “in higher education administration with emphasis in physiology of exercise in 1983. My dissertation revolved around developing a curriculum for martial arts so that universities could teach it. It had never been done before.”

Ski had studied Tae Kwon-Do in his freshman year at college. “It’s 65 percent feet and 35 percent hands. A lot of your contact is usually with your feet,” says the second degree blackbelt who fought professionally for two years on the Professional Karate Association circuit and was two-time national karate (in Tae Kwon-Do) and had Chuck Norris sign his trophy.

As part of his paid work- study program as a student at Northeastern, Ski ended up being the trainer for the football team, because he wasn’t big enough to actually play on the team. He remembers that the team would sign up for special boxing matches. “They’d have these boxing matches called Smokers, a one-day event. I didn’t know anything about boxing,” he grins, but he signed up. “I ended up boxing and became an Amateur Athletic Union [AAU]. My claim to fame in boxing AAU State Runner-up Champ was fighting for my club team and they wanted points to win state and I had to fight in the Open Advance division because I was over 21 years old. I got matched up against a USA Army champ and he was scared of me,” at least for the first round, he says, “because he heard I was a national karate champ, then the next four rounds he beat me like a drum because he realized I didn’t know anything about boxing.”

Post-doctorate, Ski was offered a job at a public school in Ardmore, Oklahoma. “I wanted to coach so I took the job: football, wrestling and track. It was an alternative school where we had fifth through 12th graders in the same room. These were children with a lot of issues but they functioned very well because they all had the same problems and couldn’t socially adjust to a normal environment. It was a unique situation.”

He was three years at Oklahoma State, one year at Ardmore and 31 years at Stillwater High School before retiring in 2015. “Work was cutting into my playtime so something had to give,” he says not quite seriously, “so I gave up work to play.”

He discovered Crested Butte in 1991, “When my friend brought me up. I’d live here during the summers, and bought a place in 1999. Some summers I’d be scraping ice off my windshield in August and then I’d pull back into Stillwater and it’d be 110 degrees with humidity. I’d miss the hottest part of the year there but still it’d be up in the 100s. Once you spend a summer in Crested Butte, you can never spend a summer in Oklahoma again.” Now that he’s retired, he’s a full-time Buttian.

“I’ve run to Aspen over West Maroon Pass, had lunch and run back. You tell people in Oklahoma that and they think you’re crazy but you tell people here and they ask if they can go with you. That’s the difference in attitude. Colorado is one of the top-ranking states for health.”

Ski’s done 68 marathons and ultra marathons including, he lists, “London; St. Petersburg, Russia; Zermatt, which was my favorite with 26.2 miles all uphill along the Matterhorn.” He continues, “Mt. Davos, Switzerland; Innsbruck, Austria, which started in Tirol, France over Brenner Pass into Innsbruck; Grindalwall, Switzerland; and my last marathon was Tulsa Route 66 on my 62nd birthday and was my 62nd marathon. My last ultra was the Grand Traverse from Crested Butte to Aspen.” He’s also climbed all 54 official Fourteeners, “and four unofficial Fourteeners,” he says.

Internationally, he’s climbed the Matterhorn, Mt. Blanc, the Eiger, Jungfrau Monk and enjoyed traveling to 43 countries. “Zermatt is my favorite city and Switzerland my favorite country but,” he confesses, “my all-time favorite place is Crested Butte.”

“My thing is running and skiing.” The last two years he’s taught ski school at Crested Butte Mountain Resort. “It was by default. I was with guest services, a volunteer service with CBMR, and we’d back up the ski patrol, everything concerning safety and guests.”

After a month of training this past season, he taught full-time. “Two years ago I worked for CBMR, now I work for Vail. I wasn’t planning on working, but I was doing it as a favor for some friends because they needed ski instructors.”

When the Public House, the newest Crested Butte brewery, opened two years ago, Ski was called upon. “The manager emailed me to do security because of my background. I did it one night and was asked again for the next concert.” He’s been there ever since. “In everything I do, if it’s not fun, I don’t do it. I get paid for skiing during the day and listening to music at night and it caused me to come out of retirement,” he says.

Of course, Ski plans on going to the 2020 Olympics in Tokyo. He worked the Olympic trials in Atlanta in 1996 for the USA Track and Field, filming for the trials. He also went to the 2012 games in London and got to see local runner Emma Coburn compete. He travels a lot with his longtime buddy, Duane Vandenbusche, who is also an Oklahoma State alum. “We met here. I worked with him in his running camps. I’m his technology advisor,” Ski says tongue-in-cheek, “because I know how to turn on a computer so he thinks I’m a genius.”

Ski’s life philosophy matches his warm sense of humor, which is in constant play. “I’d rather die while I’m living than live while I’m dead! It’s the atmosphere, the weather, the people here, everybody’s laid-back with no stress,” he says of Crested Butte. “You don’t have to deal with any stress or listen to the news,” he wisely surmises and jokes that he heard we have a new president since he retired. “Everybody’s into fitness here, and an active lifestyle is what I like.”

Share
Previous Bird’s eye view: a glimpse of Gunnison County from 12,800 feet
Next Council pulls back on proposed tobacco and nicotine tax