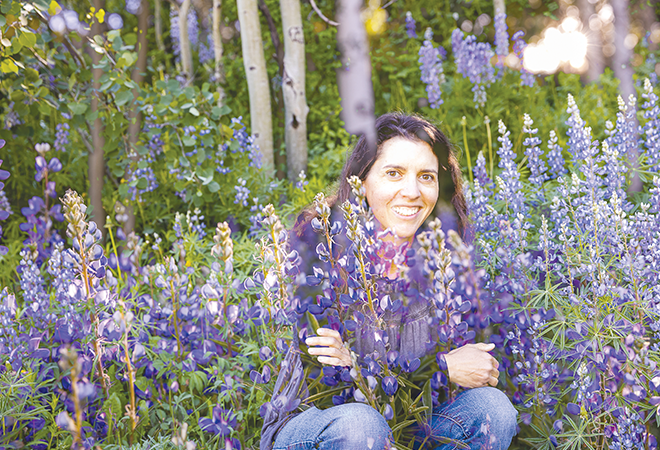 “Into the forest I go, to lose my mind and find my soul.” — John Muir

In the reckoning that can occur when walking deep into the surrounding aspen and pine forests, touching the sky from the top of a mountain or coming into a high alpine meadow filled with wildflowers, one can come to know the joy of peace and freedom we sense here in our valley. Colorado native Ivy Walker recognizes this aspect of nature and has endeavored to share it with others as nature-based therapy.

Ivy was born and raised in Wheat Ridge, where her father was a road construction worker, Vietnam veteran and she was the middle child with two brothers. Throughout her childhood, Ivy learned the love of the outdoors from her dad, who showed her how to fish, garden and grow her own food and flowers. She was part of the garden and even her name is derived from it, but that was because, she says, it was the only name her parents could agree on.

“I spent a large portion of my childhood weeding and gardening,” on what, Ivy recalls, were two city lots that her paternal grandparents’ home was on. And she observed nature from a child’s point of view, such as, “when the various flowers and plants emerged from winter slumber. It’s important to be in touch with that connection, that sense of nature when you grow up in the city,” she says although she feels that she grew up in a small town within Denver. “There’s so much nature to see in the city.”

After her parents separated, her dad would take her camping. “Mom was my primary caretaker and my parents only lived a block apart after they divorced.”

“Art,” Ivy smiles, “was my first language. I was more of an artsy kid so it was big in my world early on. Going camping and noticing things in the garden is a decent snapshot of who I was,” she says and very much who she still is.

Ivy graduated from high school in 1990 and attended Colorado State University (CSU) to study art. “College life was great. It was wonderful to get to make art and to learn and read—those are my nerdy tendencies,” she laughs. “That’s what I like to do.” She signed up for classes in poetry, painting, drawing, ballet, “everything I always wanted to take,” and earned a BFA in printmaking in 1994.

After graduation, Ivy felt, “I just wanted to continue to create, work and exhibit art and build a life in that direction. One of the ways to be an artist and exhibit work is to become a professor. The colleges, in some ways, have replaced the patrons.”

Ivy explains, “Back in the old days, there’d be patrons for the artists and then they’d have a way to live and produce art and a way to put food in their belly and survive. In essence, they’d have someone to appreciate their work and support them. I feel like the university system has taken up the call to support artists. So, I figured I needed to get my master’s to become a professor to continue to create and exhibit at the level that I wanted to.” It was excellent logic and Ivy received an MFA in painting and drawing from the University of Colorado (CU) in Boulder in 1999.

Ivy met Todd Walker, a pro mountain bike racer, while she was an undergrad at CSU. The two had married in 1994 and having visited Crested Butte numerous times for camping and biking, moved up in late 2000. “It’s beautiful here and we were just going to wing it. I was going to apply for teaching jobs and exhibit. My very first job was at Rocky Mountain Chocolate Factory and also, simultaneously, at the Western Slope Music Festival, which became the Crested Butte Music Festival. The life of an artist is about piecemealing it all together.”

The following year, 2001, they moved to Gunnison, had their daughter, Lia, in 2004, and relocated back to Crested Butte from Gunnison in January 2007.

When Ivy was hired to teach art at CU Boulder in 2000, she began commuting back to her Crested Butte home on weekends for the three years she taught on the Front Range. She also worked various jobs in town during her summer breaks. “I loved helping people have that light bulb moment,” she says of teaching, “especially in the arts, when they’ve been struggling to figure something out.”

It was after she returned from Boulder that third year that she became pregnant and for the next five years became a stay-at-home mom. Ivy continued to create and exhibit her art with shows in Denver as well as Crested Butte and Gunnison. In 2008, Todd designed their home, a duplex in the River Neighborhood in Skyland. As an architect, Todd had also designed several other houses in the neighborhood.

Ivy began working at Oh Be Joyful Gallery in 2009. “I was transitioning into doing nature-connected coaching. Art is the thread that runs through the whole story. Nature-connected coaching is taking people out into the land to discover, explore and work on their goals. What happens when we go out into the land is that we engage in a certain process, which I’m tracking as the coach. I’m asking them a certain amount of questions, or engaging nature in a particular way to help illuminate what’s important to them, what they feel their soul-directed purpose is.

“When we’re out there,” Ivy continues, “we’re listening and aware of what’s happening in nature because a lot of times, where we end up in nature is a direct reflection of where they are in their internal process. We get really playful with that possibility. The land becomes this incredible mirror and teacher, an affirming teacher, reconnecting yourself with who you are.

“This isn’t news to everyone who lives up here,” she explains, “They are coming for that nature connection. Things just feel right when they’re out in nature.”

The artwork Ivy creates is about her relationship with the land, with nature. The connection between the coaching and her art began when people saw her “art photos” and they’d want to come see how she worked. “When people are curious they want to understand how to engage the art or that dialog with the land more. That’s what brought me to the nature-connected coaching—it was a container to give people that sort of experience in the land, with the art, in some ways.”

Ivy was getting her own healing through the land as well. “I realized that I could bring that kind of process through a combination of nature-connected coaching and making art with the land. Ultimately, what I do with people, through my coaching process, is to take them out into the wilderness and engage nature. We listen to the wisdom of nature as part of their coaching process. Sometimes we make art as a part of that process, other times we might do more somatic activities.” Ivy began her Creative Earth Coaching in 2015.

“Even though it sounds really woo-woo, it’s a real process,” Ivy says of the coaching and the school she attended, Earth Based Institute in Boulder, to further her knowledge in the field.

The course was a one-and-a-half-year program, one weekend a month, for the nature-connected coaching program with a certification. She’s gone on to become an associate certified coach through the International Coaching Federation. “When people come for coaching, they want something to shift in their lives. It’s about change. There’s a process that I’m taking them through by asking questions and sometimes we visit their history to understand how that thing that they want to change came into being. From that background information, we focus on where they want to go, what they want in their lives and what that change looks like. Coaching is a process that moves you forward, and to have someone partner with you to make that happen can be very transformational.”

Ivy still works with Earth Based Institute in Boulder, but remotely from Crested Butte. “The creativity, the listening and the collaboration, that’s what I’m doing, in so many areas, with the coaching and my art,” she smiles. “I’ve got all these collaborations, all my projects feel integrated. I get to do all these interesting things with all these interesting people. I get to make art, do coaching and collaborate with the creatives in my community and beyond, and I get to exhibit my work, so life is super exciting.”

Her work shows at Oh Be Joyful Gallery. In January, Ivy will be returning to Boulder, commuting once again, to the Naropa Institute to earn a master’s degree in eco-psychology, which is a two-year program that studies how the earth is a part of, and influences, the human psyche.

“I just want to read more about the intersections of how the land is part of us and we are part of the land and how that manifests,” Ivy says.

This week as the Crested Butte Wildflower Festival kicks into high gear, Ivy has teamed up to co-teach a class with writer Molly Murfee called Regenerations (see Molly’s weekly column in the Crested Butte News, Earth Muffin Memos). “We put together a series of five classes investigating how to connect with nature individually. Over the course of the classes, you bring the classes into the public sphere, moving into a statement around protecting nature and ultimately, dropping into a state of awareness in nature and a mindfulness, also, an awareness into creativity and expression.”

Ivy seems perfectly aligned and in the most conducive place to continue both her art and her nature coaching. “I love the land here. I really love this place and its community.” She says, “How does nature affect and inform human imagination and how do we bring that forward? It’s a piece of my thesis—but everything will change once I get in there,” she laughs as she thinks of heading back to school. “I just know what I’m curious about.”

Share
Previous Play review: Picasso at the lapin agile
Next Wild in the Hills