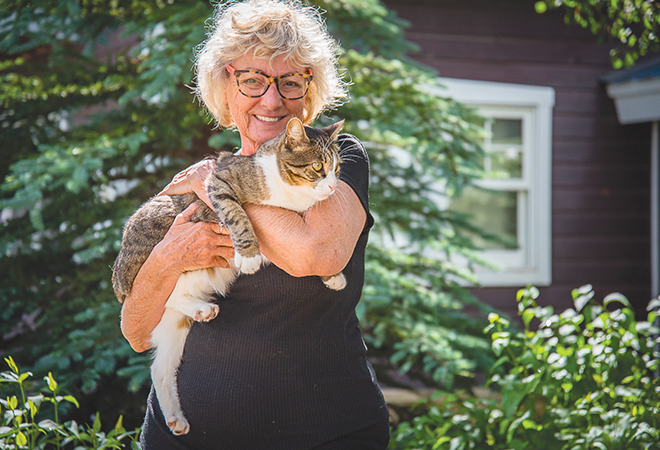 Of Shakespeare and Tribbles

Tribbles the cat stares unwaveringly at Kathleen Mary from his perch on the small table next to her comfy chair that she’s nestled into trying to ignore his persistence. In her tiny but warmly inviting RV home, she has painted her walls and cabinets in a dusky blue and the sun pours into the room in slatted rays through window blinds, creating a calming retreat on wheels. Kathleen has chosen to live the harsh winter months somewhere far south of Crested Butte as a nomadic, free-spirited playwright and Rolfing therapist. Meanwhile, like clockwork, Tribbles’ tail is ticking off the seconds to his timed feeding, which he seems to innately know, and he trills when the moment is at hand.

Kathleen and Tribbles spend spring through fall in Crested Butte, chasing sunny days and 70-degree weather until winter comes to the high country. Her life on the road has not been without adventure and some trauma. Tribbles, who has earned his notches as the Bobcat Rider, has jumped onto the backs of these larger wild cats as they lurked around the RV, even threatening Kathleen once. “The bobcats don’t know what’s on their back so they run. When they roll to get him off their back, Tribbles charges them,” she says, completely astonished. “I think he looks like a bobcat kitten when he’s all fluffed up and in fighting mode, so they let him live. I think he’s used up four of his nine lives.”

Three of those lives were riding bobcats and the fourth was when, during Kathleen’s stay at a friend’s house in the wilderness area of northern California, Tribbles went missing for 40 days. Kathleen stayed an extra 30 days searching for him until finally, devastated, she left for Crested Butte, accepting that her buddy was forever gone. Ten days later, Tribbles the Bobcat Rider showed up at her friend’s door. Kathleen rushed back to California to get her benevolent protector.

Kathleen’s parents came out west during the Second World War. Her dad was in flight school in Goodyear, Ariz., and mom was a Rosie the Riveter. After the war, her parents moved with their Jersey girl daughter back to Trenton, but they had fallen in love with Arizona.

While she was still growing up in Trenton, Kathleen and her sister were enrolled in a Catholic school until her mother figured out that a parochial school with notoriously harsh teachers wasn’t conducive to the mental health of young children who return home with bloodied knuckles from nuns’ infamous rulers. Mom pulled the girls and enrolled them into public schools where they were the only two Caucasian kids, not only in the classroom but in the neighborhood.

Kathleen remembers affectionately, “Those were the best school years of my life. The teachers, who were all of color, were all motherly. You got hugs.” Kathleen noted the contrast to the knuckle-whacking nuns.

Kathleen’s parents moved their family, now with the addition of a brother, to Levittown, Pa. Kathleen laughs, “As a kid, my favorite thing to do with my best friend was to climb his willow tree and sing the entire score of Camelot. You couldn’t be seen up there. In hindsight, I felt sorry for the neighbors.” She was introduced to Shakespeare by her 11th-grade English teacher. “It was Macbeth and it was like learning a foreign language,” Kathleen says.

Her parents decided to act upon their dreams of returning to the west and moved back to Arizona when Kathleen was in high school. She graduated in 1967. It was the era of the Vietnam War and Kathleen married her high school sweetheart, who was then deployed to Washington State, where they had their first son, Rob. Afterwards, the budding family was sent to Okinawa, Japan, where their second son, Aaron, was born. The Vietnam War was a traumatic and conflicting experience for an entire generation and Kathleen and her sons returned to Phoenix, where her parents were still living. Teaching arts and crafts in a community center in Cave Creek, Kathleen utilized her resources. She says, “I would teach any craft class they’d ask me to, then go to the library to learn how to do it.”

Kathleen was beginning to realize that Phoenix was no place to raise kids. She remembered how she enjoyed Crested Butte on a vacation earlier that year. “I felt more at home here than anywhere else. I instantly knew I wanted to raise my boys here,” she says.

It was 1976 and Crested Butte was still a sleepy, rustic little town. Kathleen says, “We lived in a tent up Cement Creek, later moving into one of the Cement Creek cabins.” Kathleen got a job at Houston Lumber (now Alpine Lumber), as well as a second job as a cook at the Wooden Nickel. Like most, she had a third job, also as a cook, at the Way Station.

“I was a single mom and I needed day work. There I was with three jobs, two boys, living in a one-room cabin up Cement Creek, and if we timed it right, we could get to the end of the road in time for Gene Mason, who was going to work, to give us a ride into town because there was no school bus,” Kathleen says.

“All winter long, we walked the two miles down to the end of the road. It was an amazing Crested Butte start,” smiles the pioneer woman. “We moved to town where three jobs will make you enough money to move into one of the shacks.”

Kathleen was introduced to the Mountain Theatre when her boys were in a local production of Peter Pan and she volunteered. “I painted sets, sewed costumes, hauled furniture, and helped whoever needed help. I felt immediately at home and knew that’s where I wanted to be. It was like an epiphany,” Kathleen says.

When Mickey Cooper stopped her on the street one day, handing Kathleen a script to read, it was inevitable that she would wind up with a part in the play he was directing, The Oldest Living Graduate. A year later, she acted in Night of the Iguana, directed by Eric Ross. “The second night of the run, it clicked. I completely understood the thrill of being an actor. I stopped being self conscious and I started being Maxine,” Kathleen says of her “wow” moment, but confesses, “Eric Ross told me that I needed to direct because, as an actor, I never listened to the director.”

So she did, directing many plays. When Eric left his position as artistic director at the theatre, Kathleen applied for the job and was hired. Six years later, in 1984, Kathleen decided to move to New York City to start a theatre troupe, which she called the New York Theatre.

Kathleen directed for various theaters in NYC and was stage manager for John Glines, who she defines as, “The first person to legitimize and make gay theatre professional.” This opened a lot of doors for her. “I was getting directing gigs because I was working at The Glines.” Living happily in NYC, she was developing a Brown Bag Theatre in the World Trade Center when it was bombed the first time in 1993, so her plan never materialized.

Several years of working the city productions and a failed romance sent Kathleen to Seattle to do theatre. It was there that she manifested her concept of the Brown Bag Theatre, which, she explains, is a lunchtime theatre with 45-minute one-acts, served up with a homemade lunch. Kathleen says,  “I would make the sandwiches and a hot bowl of something.” The concept and shows were very successful. “In the summertime, we’d go outside and do 45-minute Shakespeare in the plazas of downtown Seattle and those I’d cater through a local eatery,” she says.

One day in the late 1990s, Kathleen received a phone call from a man in Crested Butte she had met previously only once before, David Owen, who was then the president of the board of the Mountain Theatre. Owen asked if she’d consider returning to Crested Butte to again be the director of the theatre. The theatre was in trouble, they had lost their space, there were only three board members and two of them were retiring. Kathleen left her successful endeavors in Seattle and moved back home to help rebuild.

“We rebuilt the board and petitioned the town to get our space back above the Old Town Hall. It was a two-year struggle,” Kathleen says, and with the help of a lot of supporters, the Mountain Theatre was returned to its space, which was later named the Mallardi Cabaret. She remained artistic director for five years, producing, directing and teaching before returning to Seattle to start a masked commedia troupe.

Commedia, Kathleen explains, is the oldest form of slapstick comedy in the world. “It’s Italian and comes from the piazzas of Italy, where a troupe would go from town to town. It’s total improv with archetype characters. They’d send a spy ahead to the next town and gather all the local issues and politics and incorporate them into their sketches.”

Although the actors from the university were brilliant, they weren’t natural comedians and needed scripts, which didn’t work with improv theatre. When the troupe disbanded, Kathleen decided to try her hand at Rolfing, leaving the theatre for the time being. She enrolled at Anatomy Trains in Maine, became a certified Rolfer and returned to Cave Creek in 2002, occasionally guest directing for community theatres in Arizona.

She later hit the road in an ambulance she converted to an off-grid home, ending up in Crested Butte that summer. Inspired to work with actors again, she created The Lab project. “It is a free actors training program. There was both an actors lab and an improv lab. The actors in the lab often asked if we’d be doing any Shakespeare, yet no one could commit to a full production. This gave me the idea for ‘When Shakespeare is Your Valentine,’” a new play she’s in the process of writing.

The play is already cast with a first reading of this work in progress on Sunday, August 18 at 7 p.m. at the Crested Butte Center for the Arts. “Admission is free and I’m hoping for audience feedback after the reading. The play is a cheeky look at Shakespeare’s typical women, the silent obedient daughters, the morally flawed queens. There’s some time travel involved and a theatre with no doors. It’s a comedy; there will be blood,” Kathleen grins.

“The Crested Butte Center for the Arts is generously sponsoring the process of taking this unfinished play through workshops and into a full production sometime next year at the Center’s new theater,” Kathleen says. Many are excited that Kathleen might also be persuaded to initiate her Brown Bag Theatre productions in town next summer, a perfect match for cultural tourism and the Creative District that Crested Butte has become.

For now, Kathleen is busy finalizing her play and Rolfing clients with her 18 years of experience. She hasn’t given too much thought to winter yet, but as the August days cool off into autumn, she and Tribbles will think about making their way south again, waiting for the winter snows of her home in Crested Butte to subside.