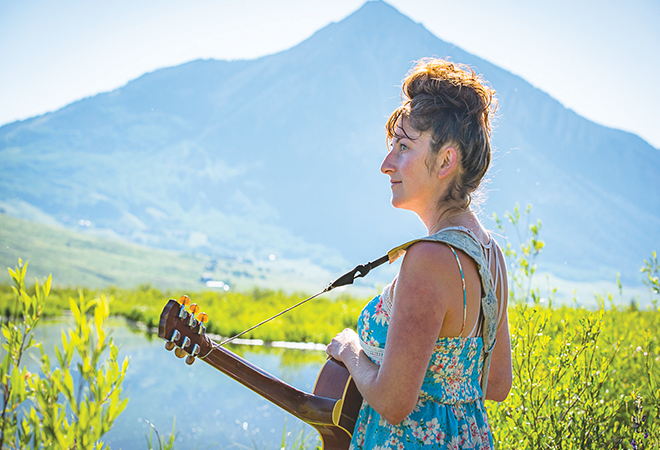 Rachel VanSlyke sits down on a tall stool and picks up her well-worn guitar. Sandy blonde tresses piled atop her head with a few escapees falling around her face, she gives her audience a big smile, a few interesting anecdotes as she arranges herself and then breaks out in song with a voice that draws in another 40 people from the street in an instant.

Although she’s mostly a summer performer in Crested Butte, occasionally staying on through late autumn, Rachel has been a mainstay and crowd gatherer at all her shows in the valley for the past several years. Her brother, Chris (also a guitarist), and his wife, Natalie, own and operate the Sunflower restaurant on Elk Avenue, where Rachel is also a part-time server.

Born and raised in Johnstown, N.Y., Rachel had the advantage of having a family full of musical talent. Her mother was a multi-instrumental musician and a social worker. Her grandmother was a jazz singer and, according to Rachel, an incredible artist, with a stained glass studio as well. “She was a wild one and I’m just like her,” Rachel says. “I was very much encouraged to find a career in whatever made me happy. My mom was full of love. We grew up poor but there was an emphasis on following your dream and treating people kindly. There was a lot of compassion.” This was the basis of her upbringing.

Rachel began writing music when she was 11 years old, although at the time, she didn’t even play an instrument. “I just started writing about things I was feeling.” Eventually, she picked up guitar at 14. “It was a guitar that I got from my biological father, although he didn’t raise me,” she says.

She actually started with piano and still writes her music primarily on that instrument rather than the guitar. She claims she doesn’t know many chords on either, but you wouldn’t realize it in her performances or her songwriting. “I always knew music was my language. It always felt like home to me. I felt that music was part of a bigger picture of the language that I speak. In life, I had a lot of tragedy but music has always been the one thing that parallels with a belief and a strength in knowing that you’re supported to move on, to move forward from these things,” she says.

Rachel tells of a life different from anyone else’s in her high school. “In ninth grade I lived on my own. I moved out at 15 and worked two jobs while going to high school. I doubled up on classes so I could graduate early, but I ended up graduating with everyone else because I had to stop going to classes because of life,” she smiles.

“After graduation, I definitely felt inspired by my grandmother who, in addition to being a musician and an artist, was a construction worker. She’d build things for herself all the time, her house was like a fairytale world. There was a room where you jumped through a round door into all pillows and black light paints,” she says with admiration. The inspiration led her to earn an associate’s degree in construction.

“I was influenced by my grandmother, who was doing a lot of things in her time that weren’t being done by other women,” Rachel says. She also has a real estate certificate from New York State and she had a plan. “I thought I would create new spaces by fixing places up and selling them. I also thought it was incredible to defy expectations in doing things that women don’t normally do.”

When Rachel started college, she was inspired to move into a new direction. She says, “Because I felt I was living other people’s lives. I started doing martial arts, Kenpo, and that really changed my perception. It was empowering. I felt safe and also that I could accomplish anything I wanted to. It made me feel wonderful.”

She set out for California, landing in Venice Beach to visit her brother, Chris. “I loved it there. It was a catalyst for me to be able to let go of the fear of performing in front of people. I was so shy up to that point and I would only sing in the bathroom,” where, she laughs, “the acoustics are great. I ended up playing a lot in California and recording.” She also clinched a record deal there.

She returned to New York, fell madly in love with a guy and they loaded everything up in a van and moved to Ft. Lauderdale. “We wanted to be by the ocean. He was also a musician and was very encouraging to me and arranged for my first studio time, and that changed everything for me. After I heard what a recording engineer could do for my music, I felt like it was the only thing that I needed to do and had to do. It gave me confidence in my music.” Rachel started a couple of open mics and had a regular bar gig. She went through a heart-wrenching breakup when she and her beau split, but within months she signed with a Los Angeles-based record label and headed to Santa Monica to record her debut album.

There was a tour planned to support the new album but Rachel returned to New York because her grandmother had passed away. At the same time, her uncle, who she describes as, “another crazy artist, painter and musician,” also passed away. “My intention was to save my grandmother’s house,” Rachel says of postponing her tour to return to New York.

“For some reason, I thought the tour to support my newly released album would be great to do on a bicycle. The record company thought that was a horrible idea, but I did it anyway. My plan was to get all the local community centers, like bike co-ops and festivals involved that were pushing for sustainable efforts. I wanted to incorporate my shows into what people were doing sustainably for their communities.”

While planning for the tour, Rachel was waitressing and bartending at night to support herself and the tour, but she’d spend her days at a local college’s computer lab to plan the tour itself. “It was a lot to organize and the one thing I didn’t work out was where I was going to sleep at night,” she shakes her head and laughs. “I’m booking the shows and involving the things people were doing sustainably in their communities. I’d try to bring awareness to what people were doing locally through radio shows or my performances.”

Just before the tour started, while she was riding her bike in Florida, she was hit by a drunk driver. “I had no helmet on and I lost consciousness. I was badly injured with a lot of head injury and lost 90 percent of hearing in my left ear. I was in a wheelchair for a while,” Rachel recalls.

In the years since, most of her hearing has returned but the injuries still remain in various and ongoing aches and pains. “I could have let that set me back or I could move forward with what I had poured my whole soul into all my life,” Rachel says.

She moved forward. “I basically got out of the wheelchair and back onto the bike, this time with a helmet, and said, ‘Let’s do this.’ I ended up doing 24 of the 30 shows I had booked. The accident definitely changed my life for the best. It gave me a wonderful new outlook and made me want to live. It made me want to share. Before the accident I felt extremely stubborn, independent and alone, but I needed so much help after the accident and having that experience made me realize how much I needed to rely on strangers, which was a perfect precursor for the bike tour. Once I got out there, I was knocking on people’s doors every day, explaining what I was doing and asking to camp in their backyard. “ Rachel camped out for 110 days on tour and says, “It was the most incredible experience of exploring America at 10 miles per hour.”

After the tour, Rachel was uplifted and encouraged. “My mind was blown. I went to live in Pickens, South Carolina, alone in the woods for two years in a one-room shack that was mostly off-grid. I left for a month-long tour but my car broke down in Florida, and my next stop was Nashville. I kept filling up the radiator with water until I made it to my one show in Nashville and I ended up staying.” She got a job there bartending while playing gigs. “I did my next two albums in Nashville.”

Somewhere in the midst of all that, Rachel started coming to Crested Butte to visit her brother, who with his wife had just opened the Sunflower restaurant. “I pulled into Crested Butte and within five minutes, I was working and helping out at the restaurant. I fell in love with the community, and since then, I’ve been completely supported by the community to fully be myself and express myself musically. I’m incredibly grateful for the work and to be a part of the heartbeat of this town.”

Rachel’s been returning to Crested Butte every summer and some winters for seven years. She had been spending most of her winters in Nashville until recently. Now she spends her winters in the tiny home she’s built on some property in South Carolina.

Even though Rachel is one of the busiest musicians in town, she’s made time to teach a workshop in songwriting as part of the Literary Festival at the Crested Butte Center for the Arts on August 9 (go online to crestedbuttearts.org or stop by the Center to register for her class).

“I have 760 voice memos,” Rachel says of one of her methods of retaining ideas in her songwriting. “Melodies come to me and that’s how the song process starts. It’s a matter of taking a second to let the song move through me,” she explains. “It could be like just three little notes, there’s no words, it’s just a feeling. Then,” she asks herself, “what does it feel like, how am I reacting to the melody? It probably evokes some emotion in me so then typically it starts with a fraction of a song and then it expands to sound like something. I’ll write a page of notes about it and sometimes lyrics, then a rhythm starts to form, and then melodies sprout from that and usually that first little part that had come to me will be the hook.”

Rachel has written thousands of songs and confesses, “Some will never be shown to the world but that’s the thing about songwriting—you have to let things flow through you without judgment.”

Rachel enjoys her time in Crested Butte, saying, “This is the most incredible community I’ve ever been in and I’m so grateful to return yearly. The sheer support of this town in unmatched by all of the places I travel to. We’re exchanging energy here. We’re not just giving and taking from each other. We’re exchanging and encouraging each other to live this life that we love.”