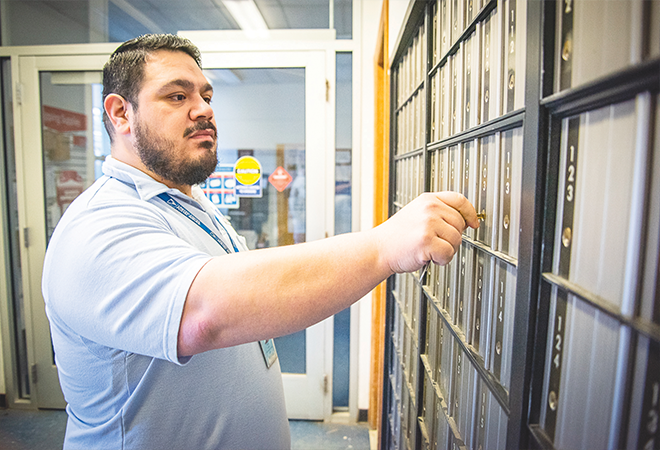 Patience is one virtue Alex Garza has learned and he marvels at the generally positive attitude of those locals waiting in line for what sometimes seems like forever at the Crested Butte post office to pick up packages, mail items or return Amazon purchases.

He’s only been here a year but he says, “People here will wait a half hour or more for their packages and when they finally get to the window they still say, ‘Hi, how are you?’ and greet you with a smile, ask how you’re doing and genuinely want to know if you’re okay. It really is nice. I met the entire town in the first month I worked here. It’s unique because nowhere else can you do that.”

His patience comes from having to coexist with nine sisters and a brother when he was growing up, even though some of them were much older. “People always ask me why I’m so patient. It’s because the girls were all horrible,” he laughs. “Bossy, pushy and they didn’t share anything. So I just got used to letting things fly. I like things to be super easy. Things just stopped bothering me. I mean, I like all of my sisters, I really do,” his smile confirms.

Alex was born and raised in Corpus Christi, Texas, to a father in the Marines and a mom who worked long hours as a nurse. Sometime after his parents split, his mother remarried a man with five daughters and it wasn’t the ideal Brady Bunch scenario, but Alex and his younger sister were taken care of by one of the older step-sisters. “She was the one we were always pawned off on so we learned not to be annoying very early on. People always tell me about their fun childhood stories but we never did anything like that. But Corpus Christi was awesome. It’s what I knew; I never knew anything different.”

By the time high school rolled around, the family had shrunk to just Alex, his mom and his little sister. “It was a struggle financially but we were a close family,” he says. Alex focused solely on academics so he could get into a good college, and, he confesses, “I wanted to become someone important. I had watched the movie Wall Street. I wanted to be Gordon Gecko, which is not a good thing because all he cared about was money and power,” and he soon came to the realization that part of the deal wasn’t ethical.

Alex participated in the Academic Decathlon. He describes the experience: “We’d get together as a team and compete at different schools through testing on 10 different subjects. It’s a huge thing in Texas. Every high school has a team.”

He was also on the debate team and a school group called Texas Boys State, which he explains, “is a conference held every year. Boys from all over the state convene in Austin and we get to meet legislators, judges and all kinds of people in the legal and political fields. They talk to you and hold conferences on what it means to be a judge or magistrate or a politician—public service basically. They conduct mock trials and mock legislation.” He was inspired. “Everything about it was so amazing to me. To be a lawyer, to make a difference, to be a part of something so big was pretty great. To be in the legislation side affecting change and coming up with these ideas and solutions and new laws. We felt like we could change the world with this. It was easy to get engulfed and immerse myself even though it was all mock and wasn’t the real world.”

All of his school endeavors paid off and Alex enrolled at the University of Texas at Austin. “I wanted to be a lawyer but I realized I didn’t have good organizational or time management skills so going into law school wasn’t going to be the best thing for me. I knew what my own limitations were and felt I might do better at something else.” He graduated with a bachelor of science degree in finance in 2002.

After graduation, Alex headed east, living in Virginia and employed in personal finance at a private bank in Washington, D.C. “I hated the job. I’m not a shark. I’m not the alpha and I know that. The people I worked with, they were sharks. It was all about making numbers, closing those big deals. Always about money.” He stayed in that cutthroat world for two and a half years, all the time thinking, “There has to be something else I could use my degree for.”

Alex’s oldest sister was in real estate and encouraged him to do the same. In 2004, he went to work for a RE/MAX franchise as an associate broker in the D.C. metro area during the height of the market. “I actually loved that job. My boss was a father figure to me. He knew I was young and didn’t have direction. I had all these ideas of how I thought things should be. He was an old Marine, realistic and down to earth. He taught me to be more realistic in my expectations, how to temper them and make realistic goals for myself and not what they showed on TV, where I spent hours and hours.”

Alex worked for RE/MAX until 2012. The market had already crashed and to stay afloat he was appraising foreclosed houses for banks. He was lucky if he closed one sale every three months. “It was kind of scary to not have the income and safety net that I had been accustomed to. It didn’t seem like anyone was going to fix it or that the market was going to be able to correct itself, so I moved back home to Texas.”

And that’s where he changed careers and started working for the government as a mail distribution clerk.

“My stepdad, aunt and uncle were all postal workers for years. I still didn’t want to do it but I was smart enough to know that they had really good lives as postal workers. They weren’t rich but they had money in the bank, they had great homes and their kids all got to go college. So I got the job. It’s decent pay with great benefits and we’re unionized,” he says and further explains the evolution of the U.S. Postal Service.

“We’re the only organization that makes our own money, meaning, all of our revenue comes from sales from individual offices. We don’t get any income from tax dollars or government monies. It used to be the Post Office Department and that was actually a fully funded arm of the government but that ended in the mid-1970s and became just the Postal Service. It’s still called the U.S. Post Office but it’s autonomous and quasi-governmental because we’re no longer run by the government but we’re regulated by Congress, who, as a whole, represents our board of governors.”

He worked in that Texas office a year and left because he didn’t like working in a cave at night. “It was a dark and gloomy plant. I hated it. I was a sorting clerk, working on a machine on the night shift in a huge warehouse. It’s not really fun and it wasn’t really me. I got a chance to move back to the East Coast to be a window clerk in Ocean Pines, Maryland,” where he worked in daylight and with people, which he liked much better.

Alex decided he wanted to experience life in a new location. “I knew Colorado was great, although I had never been here. I’ve done the forest and the beaches and I wanted the mountains. I applied to five different offices.” He took a job in Pueblo, choosing it over Estes Park and Telluride because of the cost of living. “Living on the East Coast is expensive but it’s nothing compared to these places.”

After four months, he was offered a higher position in Fowler, in the Arkansas River Valley, where, he laments, “All they have there are feed lots. The people at work and in the community were super nice but it wasn’t the Colorado I had envisioned. It wasn’t what I had moved for. That’s when I found out about Crested Butte. I had never heard of Crested Butte, had never been in a mountain town and Jim Wardzinski [the postmaster at the time] was desperately trying to find help.”

Alex made the drive up and thought, “This place is amazing. It was July 2018 and my first week I worked 76 hours. I was not expecting that. Jim asked me if I was going to stay after that first week, and I told him I wasn’t a quitter. But it’s a very stressful job with long, intense hours. I do love my job. I love being a clerk and I don’t really mind the long hours.

“On a pow day, we don’t close and that’s okay for me because I’ve never skied in my life so I’m not missing out on anything,” he grins.

Alex likes to move around a lot because, he says, “There’s a lot of exploring to do. I’ve lived in Corpus Christi where it’s sweaty, hot, humid and summer all year long but the beaches are great. I moved to the East Coast, where the beaches have more seasons. There’s just something cool about seeing a beach covered in snow. Living in Virginia, it was green rolling hills and meadows, beautiful farms, architecture and history. Every weekend you’re at a different battlefield that had a huge impact on American history. I went to so many battlefields. There’s something about walking in a field that no one’s been allowed to build on and it’s been a field for 200 years. And 200 years ago it was loud and scary with people killing each other, people who never went home again. But now, it’s so peaceful, quiet and beautiful. That’s why I like to move around, because I’ll meet people who will tell me about the places they’re from, places they’ve been to and I want to experience that.”

Although relocating to different places seems to be the norm for Alex, he assures, “I’m not leaving yet. I have a thing about staying too long in one place but this is one of the few places I’ve ever been to that I would actually consider staying. Everybody here smiles at you. It’s unique. People here go out of their way to be nice to each other and to include other people.”

Alex is also the voice on the phone who takes your order at the Secret Stash and the job is more social for him. “I get to meet people and Kyleena has like a hundred employees. I work three nights a week helping out just because it’s a fun thing to do and the energy there is crazy. It’s something else to do in my spare time,” he jokes and emphatically adds, “It’s better than watching TV all night!”