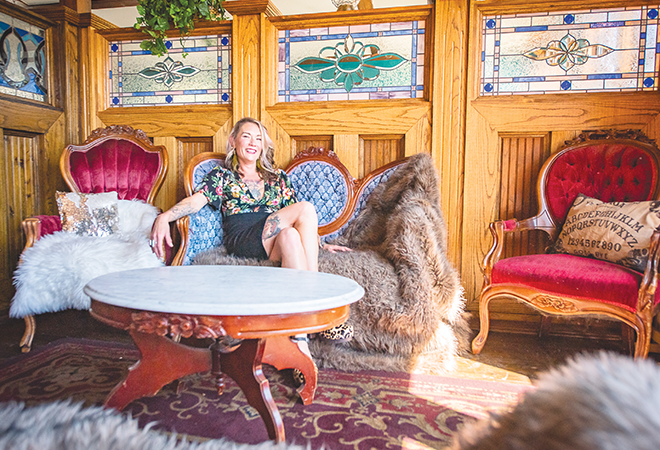 It’s not Ayla Scott who greets you at the former saloon doors of the historic Slogar building. It’s a giant wooden chicken.

For decades, the restaurant, affectionately known as “the chicken shack,” now has an additional moniker: Ayla and her partners have cleverly dubbed it “Cluckingham Palace.” Inside, Ayla is busily seating hungry patrons while steaming plates of fried chicken and mountains of mashed potatoes whizz by.

In a calmer moment, she takes time to sit in the Old West Victorian parlor to chat. “One of my favorite parts about owning the Slogar restaurant is that we get to be a part of multigenerational memories because it’s so historic. I’m very proud to hear that people have been coming in since they were four years old and are now bringing their four-year-old child. Grandma is now bringing her great-grandchild. That comes with its challenges and expectations as well, but in general, people have been very flattering and very supportive.”

Hailing from Wheeling, West Virginia, Ayla says, “I’m one of the ones who got out. It’s a very generational state—meaning, they live there for generations and they don’t leave because of the culture. It has those Southern ideals. You stay with your family, you take care of your elders and family. My single mom worked three jobs and my grandparents took care of me and my older brother a lot but Mom was always there and came to every sporting event and play.”

When she graduated from high school in 2005 Ayla wanted to pursue art. “My favorite things were drawing and painting. My grandma is an artist and made a living painting and doing all crafts. Her basement was a studio and an inspiration. As a child I’d spend a lot of hours down there with her doing art and working on crafts. She’d buy me my own paint sets,” Ayla says of her mentor.

However, when she enrolled at West Virginia University in Morgantown, she signed up to study business, marketing and management. “It was a far cry from art. I did it mostly because my mom influenced me, saying, ‘What are you going to do with an art degree?’”

During her time at university, Ayla studied international business abroad. “I lived in Europe for 13 months as an exchange student, first in a tiny village, Paderno del Grappa, west of Venice. We’d teach the villagers English and in return they’d teach us Italian. I freakin’ loved it! One of the coolest things was that the program was focused on traveling. We were intentionally given a lot of free time to explore. Traveling,” she says, “is like having that continued trust in humanity to ask for help and the hope that it will be reciprocated. It’s not being afraid to reach out to a stranger.”

After six months in Italy Ayla moved to Prague. “My best friend lived there. That was extreme culture shock. My ears stopped hearing things because my brain couldn’t take the continual unfamiliarity of the language. Prague is one of my favorite places on earth. It’s a city that looks its best on its gloomiest day. The buildings are pastel-colored with tile roofs and it’s gloomy there most of the time so the roof tiles turn teal-colored against the grey sky and that’s when Prague has her best dress on.”

Ayla also visited Budapest. “What I loved about being in eastern Europe and Prague is that you still see the effects of their history on people’s faces—communism, the reins of the government—because they lived through it. I had never seen anything like that before. It’s like a little tinge of grey in their faces, sort of tainted. They survived it, but how do you come out of it when you lived through it for decades?”

When she returned, Ayla graduated with a BS in business management in 2009 and then stayed on for her master’s, this time in elementary education.

“I was thinking I could tie art into my life,” she says of going into education. She taught third grade, specializing in reading and reading intervention. “This was the No Child Left Behind era and it was in full force. I loved teaching, loved the kids and third grade is a great age. I think it’s important at that age to teach character education, which is learning to share, learning to take time for yourself, emotional skills. That’s what teaches young children the skills to be compassionate and effective in society.”

But the rural West Virginia school Ayla was teaching in was more about teaching kids to pass tests and not, she feels, the importance of learning to learn and she knew it was an ineffective method. “Also, I learned that I had a really difficult time emotionally with being on the other side of the desk, seeing some kid’s home life and not being able to do much about it. My emotional self couldn’t let that go.”

She left teaching in West Virginia in 2011 for an opportunity in Florissant, Colo., when a friend told her about a teaching position at Sanborn, the outdoor education center.

“I had never been to Colorado, and other than studying abroad, had never lived outside of West Virginia. I drove out with my dog and landed at the 6,000-acre ranch that has been established since the 1960s by Sandy Sanborn, who was part of the 10th Mountain Division. In the summertime it’s an adventure camp where kids stay for a month at a time. Essentially, we were doing a five-day camp-out trip, climbing Fourteeners and hiking. I did mostly horseback trips with the kids. The goal is teaching them to create a community with each other through the outdoors. In the spring and fall, we’d have sixth graders from Colorado Springs who would stay for the week, with no electronics, focusing on character education and that learning to learn is fun.”

There was a connection between the school and Crested Butte as it was a common next step for the teachers to move here. Ayla relocated with 13 other teachers and taught ski school, living in a house in Crested Butte South with six others in October 2012. Her first glimpse coming into the valley put her in awe, although she admits, it was a bit of a struggle financially. “I had less than $70 in my bank account and you don’t get paid by ski school until after January. I was like, ‘Are you kidding me? How am I supposed to live when I don’t get a paycheck until the second week of January?’ Also, I had only skied a handful of times when I was 18, and on Appalachian mountains, so it was very challenging and it was a huge snow year in 2012. I had never seen powder before. I was never really great at any sports in school but I was told I was a great morale booster,” she laughs.

She struggled through her first year as a ski instructor but she smiles, “I sure as hell had a lot of fun,” and she thought it was hilarious when she received star employee of the month and other awards.

During that same time, she was also working at Izzy’s, where she met Ian Scott, her hubby. “He annoyed the crap out of me and was very persistent, getting in my way while I was working. I couldn’t wait until he was gone. He was such a pest. But then, one day, I looked outside and saw this fluffy dog with snowflakes covering her ever so gently and asked whose precious dog it was—and it was his. But it didn’t change anything except that I liked his very cute dog.” But after a night out together it finally clicked when she discovered he wasn’t quite so annoying and was actually chivalrous. They’ve been together for six years, marrying in October 2016.

Ayla had started working at the Dogwood and Slogar, but went full-time managing Dogwood. In 2013 she went to her first Telluride Bluegrass Festival, where Ian had been working with the backstage catering group. “I was living the Crested Butte life, building my community and having a lot of fun. I learned to ski properly and was really learning to be a cocktail bartendress.”

When Doug and Phoebe, former Dogwood owners, asked Ayla and Ian to come out and be a part of the Dogwood in Bend, Oregon, they moved in 2015. The sudden loss of a family member affected their stay in Bend and after 10 months, they moved to Vermont to be with family.

After a year of ping-ponging across the country, they settled back in Crested Butte in May 2017 to start their catering company, Grease and Glitter. “We did a lot of ninja cooking, meaning, we were using other commercial kitchens at 3 a.m. when they weren’t in use. We traveled a lot, catering in Silver Plume on the Front Range and picking up a lot of catering at music festivals. We got to the point where we were questioning whether we wanted to continue in the restaurant industry and then in less than a month we bought the Slogar with Malia Jones. It felt right.”

They reopened the popular restaurant last December, “and, here we are proud owners of Cluckingham Palace. It’s the hardest thing I’ve ever done but also the most fulfilling,” says Ayla.

Before they made the decision to move back to Crested Butte, the couple asked themselves, “If we only had a month to live, where would we want to be? And we both said Crested Butte. For me, this town is a genuine community. It’s a place that allows vulnerability. You can’t really hide because it’s so small, so you can’t really hide who you are. This community pulls together in times of need. It’s the Land of Misfit Toys. I didn’t move here for my dream job, I moved here for the lifestyle. I’ve lived on a lot of very special pieces of earth, some good, some bad, and Crested Butte just tops the list for uniqueness. I mean, how many times can you look out the window and see a biking troupe in costume just because it’s Tuesday?”