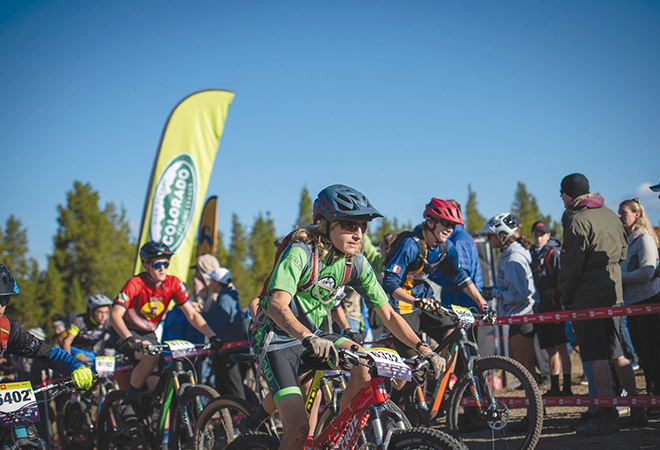 Weather cut races short at the Cloud City Challenge in Leadville but did nothing to slow down the Crested Butte Devo high school bike team as they rolled to another second-place team finish.

Expectations were high for the team as they had opened the season two weeks earlier with a second-place team result on a course they don’t really like. Leadville, on the other hand, is at altitude and out of the heat with plenty of climbing, catering to the strengths of the Crested Butte Devo squad.

“They all really like the course and it suits our riders better so I was expecting them to at least take second place again,” says coach Torrey Carroll.

The freshmen boys kicked things off on Sunday as they lined up at 8:30 a.m. for the opening race and the Crested Butte kids set the tone for the day, with all three improving on their results from the previous race.

Math Alagna led it off, posting a 12th-place finish; Luca Loperfido jumped up 20 spots from his first race to take 18th; and Oliver White was right behind him in 19th place.

“It was a great start to the day,” says Carroll.

The varsity boys then lined up and while the team was missing Robby Oberling to illness, Otis McLoughlin, Marko Alling and Gus Bullock remained on pace with their results from earlier this season in what can only be described as a field of heavy hitters from throughout the division.

“They had solid results in a very fast and competitive varsity race,” says Carroll.

Olivia Gordon and Lily Hanna were on deck in the varsity girls race as storms started brewing to the south of the venue.

“There was just a black wall of clouds and tons of lightning,” says Carroll.

Gordon and Hanna stepped on the pedals to score some big team points as Gordon posted another top-10 finish, coming in sixth, and Hanna placed 18th.

The JV boys race then started to feel the effects of the impending storm as their race was cut short and the rest of the races were cancelled, leaving six Crested Butte riders out of luck, six of whom scored key points for the team in their first race of the season two weeks prior. Nevertheless, the riders who did race still rallied to push the team to a second-place finish overall.

The team heads to a new venue in Snowmass this Sunday, September 22 for the third race of the year. Carroll feels the new course could also cater to the teams’ strengths and is looking for additional solid results and improvements across the board.

“We’re looking forward to it,” says Carroll. “The course is shorter but with more climbing, which is good for us. The team energy is great and everyone is excited for the weekend.”