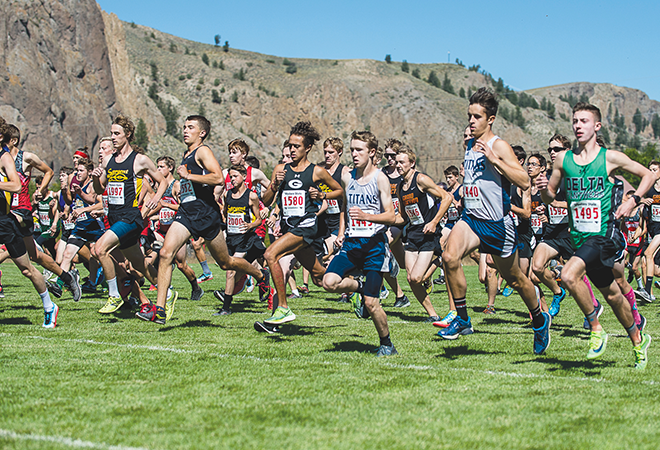 “We’re psyched on all of the progress we’re seeing”

While small and young, the Crested Butte Titans cross-country team continues to gain speed as they toe the line each weekend for races.

On Saturday, September 14 eight Titans lined up for the Cowboy Invitational in Gunnison including a couple of runners who brought their talents to the team for the first time this season. George Aklan is an exchange student from Hungary and made his Titan debut in Gunnison. Meanwhile, Myles Cress, who was a member of the girls team that went to state two years ago, missed last year to injury but is back on track this season and had her first race of the year in Gunnison.

“It was the first meet for George and the first one for Myles in a couple of years and it was very cool to have them out there,” says coach Laura Puckett Daniels.

The boys race started things off and Porter Washburn continues to lead the charge for the Titans week in and week out, as he shaved over three minutes off his time on the same course last year to place 49th out of 151 runners.

Jude Eaton, Logan Utz and Aklan were the next in line for the Titans and were embroiled in a three-way battle for the second spot among Titan finishers, with the three crossing in a span of two seconds. Eaton ended up in front of the three with Utz .40 seconds behind him and Aklan a little over a second behind Utz.

“As a coach it’s exciting to see them working as a team in practice and seeing it actualized in a race,” says Daniels. “They stayed sharp the whole race and pushed each other.”

Yvon Michel is still making up time from an early-season illness but, given his past success, should be coming along as the season continues.

“He just hasn’t found his stride yet,” says Daniels.

Three girls were there to represent Crested Butte in Gunnison with Sam Merck and Stella Reinhardt in only their second race of the season and Cress, as mentioned before, making her return from injury. Merck was the top finisher among the trio as she cut a massive amount of time off her result in Gunnison last year.

It’s Reinhardt’s first year running high school so the only comparison coaches can work with is to document progress from the week before. Based on the fact that both the course last week and this week are similarly fast, Daniels was psyched on what she saw from Reinhardt in Gunnison.

“Stella was a minute and a half faster than last week,” says Daniels. “That’s steady progress.”

Meanwhile, Cress’ race was just about getting back into the flow of the race mentality after missing an entire season to injury last year.

“We’re just psyched to have her back on the team,” says Daniels.

Overall, with runners cutting time nearly each week, the program continues on pace for the season.

“This season is all about what we have,” says Daniels. “We have nine excited runners trying hard and improving. We’re psyched on all the progress we’re seeing.”

The team heads to Ridgway this Friday, September 20 for the Ramble at the Reservoir. It’s a notoriously tough course and the Titans took a break over the past few years from the event but the coaches are throwing the team back into it this season.

“They really like running so we can do things with them that we haven’t been able to do with teams in the past,” says Daniels.