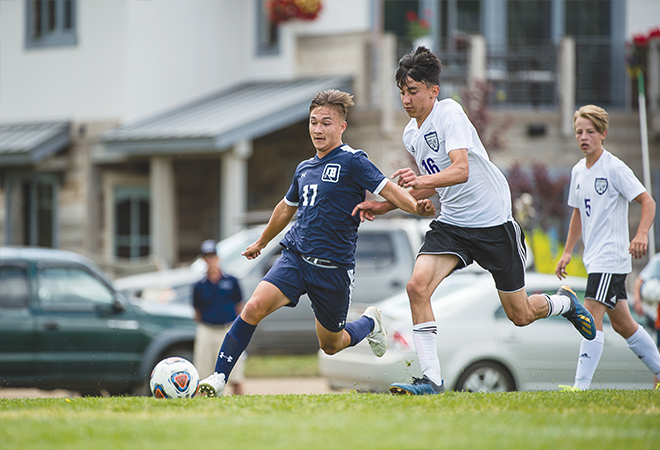 The Crested Butte Titans soccer team opened the season with three wins last week, outscoring opponents by a combined score of 18-1. They now will have 10 days off until their next contest at home against Salida on September 10.

The Titans kicked things off with a road trip on Tuesday, August 27 for a match against their longtime league rival, the Pagosa Springs Pirates. The two teams have a long history of tight matches but the Pirates struggled last year with numbers in their program. This year numbers are up once again but they are still young, and Crested Butte scored eight goals over the two halves to finish with the win.

The heat and long bus ride had an obvious effect on the Titans as they opened the game sluggish and out of sync. While their defense did the necessary job holding off the Pirates attack, the midfield and strikers were disjointed in their counterattacks.

They finally broke the seal on the Pirate net 16 minutes into the game as Chris Myers crashed onto the far post to get a tip from Dagan Schwartz and drive it past the Pagosa goalie. Fifteen minutes later Carlos Franco finished on an assist from Henry Bryndal and Nathan Miller closed the half, running through on a pass from Eric Lain to score for a 3-0 Titans lead.

The effort of Gaby Marmolejo up top eventually paid off again for the Titans as a foul inside the penalty area gave the Titans a penalty kick and Marmolejo converted. Schwartz and Hayden Faivre then each scored within 10 minutes and Franco tacked on his second goal of the game to seal the 8-0 Titans win.

Crested Butte then hosted their first home game of the season on Friday, August 30 when they lined up to face the Cortez Panthers. Cortez is another young program and the Titans stepped up their play after their Pagosa slogfest. The renewed effort paid off early as Schwartz slipped into the penalty area and onto a mishit ball from teammate Kye Matlock and poked it by the Cortez keeper for a 1-0 lead. Cortez tied the game six minutes later as the Titans struggled to clear the ball of trouble and the Panthers scored to leave the two teams tied 1-1 heading into halftime.

While Crested Butte continued to dominate possession, their shooting proved erratic as they missed numerous opportunities on net. They finally connected 13 minutes into the second half when a sequence of seven passes led to Myers slipping free and then tapping the ball across the six-yard box to Marmolejo, who punched it in. The Titans continued to keep the ball for most of the rest of the game but shooting woes continued to plague them and they escaped with a 2-1 win.

“We slowed down to their pace, which was difficult to overcome,” says coach Bob Piccaro. “We had plenty of shots but had trouble finishing. At least we pulled out a win.”

Those same finishing woes followed the Titans into the first half of their game against the Bayfield Wolverines on Saturday, August 31. A connection between Myers and Josias Navarette had the Titans up 1-0 five minutes into the game but, despite continued possession play, the attacking third proved troublesome for the Titans and they had a slim one-goal lead at halftime.

“It was a carbon copy of the Cortez game,” says Piccaro.

Following some inspirational words for the squad from assistant coach Ethan Scott during the halftime break, the Titans found their scoring touch as pressure high up the field led to seven goals during the second half.

Marmolejo opened the scoring frenzy three minutes into the second half, slicing through three Bayfield players to score. Twelve minutes later Franco drove a shot to the low corner off a pass from Navarette. Franco and Myers then connected on a set play as Franco drove a cross to the far post and Myers hammered it home with a head ball. Ethan Bacani, Schwartz and Cedar Fessenden then added one goal apiece and Schwartz finished the game with his second goal off an assist from Fessenden to cap the 8-0 win.

“All of a sudden they woke up and started playing a faster-paced game,” says Piccaro. “They were playing more proactive than reactive and the field looked tilted in our favor. Overall I was happy with our depth. The subs came off the bench and played well with no real let-down in our game and that’s huge because we’re trying to build up our entire squad.”

The Titans now have a 10-day break in the action but will return to the pitch to host 3A powerhouse Salida on Tuesday, September 10.