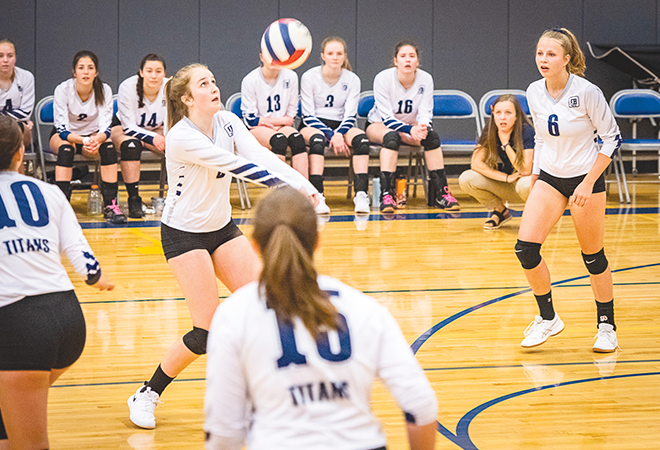 Volleyball split matches over past week

Back to full strength

After a slew of injuries two weeks ago had the Crested Butte Titans volleyball team scrambling for line-ups, the team is back to full strength and now it’s just a matter of getting back to normal and then taking it from there.

The volleyball team showed signs of what is to come with their full squad in place last week. After falling to the Sargent Farmers on Tuesday, September 19, they rebounded four days later to take down the Center Vikings in straight sets on Saturday, September 21.

“Sargent was better than I was expecting,” says coach Erin Goggins. “They were one of the better teams we’d seen all season.”

The Titans had Sophia Kubisak back in the line-up and she shook off some of her rust from her injury to tally six blocks in the match. Georgia Lange knocked down two kills, Sydney Stoneberg joined Lange with three kills and two digs and Audrey Griffin racked up 20 assists and five kills.

“We played very well and I couldn’t ask for more,” says Goggins. “We just had a tough time getting a lead and staying in the lead and there were times we got into a rut and couldn’t work our way out.”

The Sargent match and three days of practice with the starting line-up paid off in spades on Saturday though, when they faced the Vikings in mighty Mt. Olympus. It took the Titans four sets to beat the Vikings a week earlier but this time they rolled to a 25-16, 25-14, 25-15 straight set victory.

Sami Lakoski proved potent from the service line with five aces out of nine serves and adding in four kills. Kubisak continued to build back into mid-season form with seven kills and two blocks and Stoneberg and Griffin each tallied four aces.

“We had really good serving and that helped us out a lot. Our big hitters are back and that was huge,” says Goggins.

With everyone back now, Goggins is looking to make a surge, starting with matches this week as they face Custer County and Telluride next week.

“We’re just starting to really figure things out and we’re starting to find our stride,” says Goggins. “Now that we have our whole team back, we will keep working to rally and stay on top in matches.”