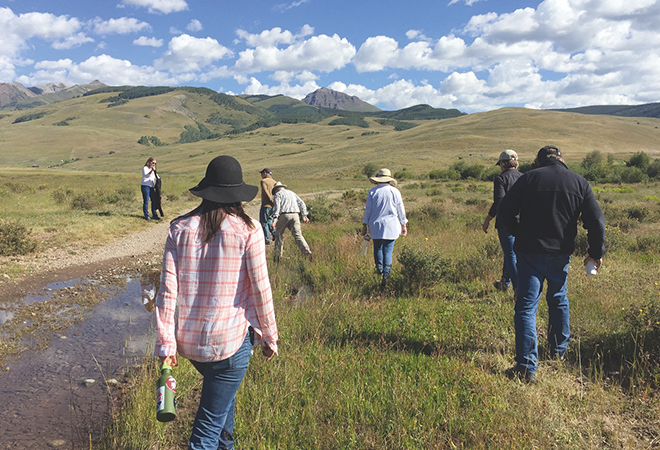 On the range: A look at ranching in the Gunnison Valley – Part I

(Editor’s Note: This is part of a series that occasionally appears in the Crested Butte News focused on local ranching in the valley.)

It’s not often you can look across a large area of pristine open space and feel certain it will essentially remain that way for the next 200 years or more. But if you are standing on any of the scores of ranches in Gunnison County, that may well be the case.

While Gunnison County has been in a phase of pursuing increased recreation and tourism, often in the way of more trail events, more trails and more real estate development, the fact that the ranching way of life has endured here for more than 100 years is no small feat. Ranchers in this area have in many cases remained unified in their purpose, according to Gunnison Ranchland Conservation Legacy executive director Stacy McPhail.

McPhail and the conservation organization that has been operating for 25 years are part of that story.

McPhail led a group of visitors and residents on a ranch tour in late August as part of the Crested Butte Mountain Heritage Museum summer series tours that highlight the history and diversity of interests throughout the Gunnison Valley. While ranching is not the oldest practice in this area, it came not long after coal mining, and by McPhail’s account, it has earned a place in our history and future as a key part of the Gunnison Valley’s economy and culture.

Ranching in this area has not been easy—or accidental. McPhail explains that the path to ranching was in many cases a process of trial and error. It began with agricultural people who followed the coal miners and experimented with various ways to work the land.

“They weren’t ranchers at that time. And they tried a lot of different things: potatoes, strawberries, lettuce and cabbage,” says McPhail. The Heritage Museum’s outreach coordinator Glo Cunningham recalls that in the 1950s, coal and potatoes were the top exports in Gunnison County.

“But given the crazy cycles of weather,” says McPhail, nothing stuck like cattle.

Cattle were brought in the late 1890s and early 1900s, and had better results in part because of optimal hay conditions that help the animals thrive at altitude and in the cold.

“The type of hay that is created is really special. It’s a mix of native grasses that do well at high altitude,” says McPhail. And they are well suited to feed cattle even at 30 degrees below zero. That mix of grasses is really high in both crude protein and in carbohydrates, explains McPhail. “The carbs burn really fast through the cows, keeping them warm. And the protein allows them to maintain their weight.”

That hay is very attractive in the equine industry, especially the racehorse industry, and improves performance with racehorses, says to McPhail. So there is a small, novelty sector of the agricultural market here, with a few ranches at lower altitude that just produce hay for export and don’t keep large cattle herds.

“It’s been interesting to watch that occur over the last 50 years, what we know about nutrition, and what we know about soil health,” says McPhail. She was previously a rancher herself, alongside her husband, Eric, at his family cattle ranch in Texas. Eric is now a livestock nutritionist and extension director for Colorado State University.

Ranchers have also bred their herds to adapt well to the climate. “You can’t bring just any cow up here and expect it to have a baby and put on weight,” says McPhail of the harsh winters. Ranchers often practice culling the herd, or picking out the cows that are not doing well. The cattle here now have the genetics from the past 100 years setting them up for greater success.

“Beef cattle can change rangelands that otherwise wouldn’t produce food into food-producing lands. They also can be stewarded and moved as the resource changes,” says McPhail.

McPhail describes how ranchers manage their land in keeping with the cycles of each season. In January, when everything is covered in snow, including the fences, ranch hands lie all the fence wires down on the ground around the entire perimeter—in the case of the ranch McPhail toured with her Heritage Museum visitors, that’s about 4,000 acres. This is done to protect the fences, and out of consideration for the wildlife passing through.

The cattle do a loop through the valley with the changing seasons. They stay at lower altitude rangelands in winter, although it is colder at the bottom of the basin in Gunnison. But ranchers keep them up close to their headquarters and home operations so they can keep a close eye on them, feeding them and offering any health care needed.

The cows are pregnant in winter and typically start calving in late April or early May. “Even that is dicey, because we can have huge snowstorms in April that can make it difficult for mother cows to protect small babies,” says McPhail.

In spring, the cows have their calves and begin moving up-valley or to higher rangelands. The home ranches where they have wintered can then begin the “huge process” of turning on irrigation and begin growing the tremendous amount of hay needed for the remaining year ahead.

The lower elevation allows an earlier growing season, with its shallower snowpack, and the cows head to mid-altitude range like Jack’s Cabin, fresh with snowmelt across the meadows, for early summer grazing. McPhail says this is true for four of the Gunnison Valley’s main ranches, all of which are family owned.

After about a month at the valley around Jack’s Cabin, ranchers move their cattle to yet higher altitudes. This can be on leased public lands or privately owned parcels. There are private ranchland parcels above Gothic, Slate River, Washington Gulch, around Gothic, east and west Brush Creek and other high-altitude rangelands, says McPhail.

Allotments have changed over the years, though. Overgrazing in the 1950s and 1960s caused resource damage, and the Western states took it as a wake-up call to enforce more responsible practices.

“Everyone’s allotments were reduced over a period of time by about 25 percent, and the ranchers had to adjust to that,” says McPhail. “In this valley, we are very resource-based, so any rancher that was overgrazing on parcels … wouldn’t be invited back the next year by the U.S. Forest Service. It’s very tightly controlled.”

The mature cows and their calves come back down off the higher allotments in late September or early October, depending upon the weather. The same four ranch families will stop back at Jack’s Cabin and then on to the home ranches closer to Gunnison, says McPhail.

Other production schemes and grazing allotments in lower parts of the valley rely on Bureau of Land Management lands. With less water and less grazing resource, those operations require more acreage and larger parcels. For this reason, different water basins offer different allowances.

“To make a living ranching here, you have to know exactly how many cows to the acre,” says McPhail. It’s a very strict practice, and allotments are limited to a set number of days. Public lands leasing is increasingly challenging, given the costs, the restrictions on them and the increasing number of recreational users across much of the public lands on which the ranchers pay to graze.

And ranchers in other parts of the country are working to keep their livelihoods afloat as those allotment changes and other considerations such as water right sales and development potential come calling. McPhail says the unique ways the Gunnison Ranchland Conservation Legacy has worked to support these ranchers has gotten notice within that industry.

“We hear from ranchers in Montana, Wyoming, Arizona and Nevada. The calls come from people asking how we are making this work,” McPhail says. “These small rural communities have a lot to hold onto.”

Here in Gunnison County, the end result is more than the three million pounds of beef produced each year. Ranches make up 70 percent of all the privately owned land in Gunnison County—that is a lot of land that has not been developed but is managed to maintain its natural scenic value as a “working landscape.”

Ranching in the Gunnison Valley also brings $13 million to the local economy annually, based on the market value of all its agricultural products, according to the 2012 USDA census of agriculture. This is a significant tax base in a rural economy, with an estimated $46 million to $50 million impact here. Beef production and in some cases hay export are relatively stalwart in boom and bust cycles of tourism and real estate, and ranches have a number of other roles in the valley as well. They maintain their scenic value through conservation easements, and water management practices are in large part why other communities have begun looking to the Gunnison Valley as a model for modern day ranching.