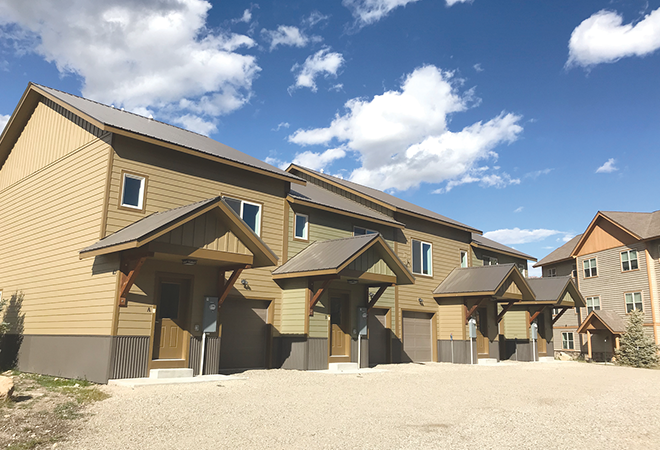 GVH purchases one for employee housing

The county-owned affordable housing Stallion Park townhomes located within the Buckhorn subdivision on Brush Creek Road are finished and ready for occupants. The county has essentially negotiated a sale of one unit to the Gunnison Valley Hospital and has decided to lease the remaining seven units rather than sell them.

County manager Matthew Birnie said that rental income could pay the general fund back for the project, allowing the county to put the units to use in the community while retaining control and ownership.

“We think we would have a hard time replicating the quality for the money—we think it’s an asset we should hold onto,” Birnie said during a commissioner’s meeting on September 17.

All units have three bedrooms, 2.5 bathrooms and a one-car garage. All are designated as non-smoking and pets are not allowed, with the exception of service animals. The county has offered four of the units to county employees, particularly those stationed up valley. The other three are in the final process of being leased out.

County employees have until October 18 to apply, and then any units remaining will be opened up to those on the Gunnison Valley Regional Housing Authority (GVRHA) list of interested parties.

GVRHA director Jennifer Kermode wrote in an e-mail to the Crested Butte News that this “‘interested list” catalogues people who want to be informed when housing opportunities arise in the valley. Birnie noted that rental properties are in high demand, and Kermode confirmed that there are more than 50 names on that list.

“We welcome folks to email us with what/where they’re interested in and we’ll add them to the list,” Kermode wrote.

The Housing Authority has suggested a first-come/first-served method for interested renters to fill the units and keep things simple. Every potential renter/household has to meet the terms of the income restrictions, which requires working for a local employer a minimum of 30 hours per week annually and earning between 70 percent and 160 percent of the area median income (AMI). This ranges from $44,730 to $102,240, depending on how many members are in a household.

Rent will be calculated based upon the household’s actual income and ranges from $1,300 per month to $2,300 per month. ”These homes are quite energy-efficient, which will keep utility costs low for each household,” wrote Kermode.

The units are finished and three tenants have already moved in.

The residential lease agreement has been finalized between Gunnison County and the Gunnison Valley Hospital (GVH) for an Elk Creek townhome at Stallion Park. Birnie said that since the Board of County Commissioners holds all the hospital’s property, the hospital could not buy the unit outright. But GVH is paying the full value of the unit for a 100-year lease with five 10-year extensions.

The hospital has asked for some latitude to offer the unit to new employees as short-term transitional housing, even if they earn more than 160 percent of the AMI.

Birnie and the commissioners discussed this request on September 19, and revisited it at length on September 24 with the GVH board of trustees.

“I was clear I don’t want them having an orthopedic surgeon living there long term, but if they need to bring someone in there for a month or two I thought that might be acceptable,” Birnie suggested to the commissioners. The primary intent is to use the townhome for employees who work at the clinic, he said.

Initially the commissioners agreed to amend either the lease agreement or the deed to allow the townhome to be used as transitional housing for up to six months for a full-time employee. An employee who qualifies for the affordable housing would not be restricted in the length of the lease, at GVH’s discretion.

Commissioner John Messner said he isn’t interested in seeing the unit used for traveling nurses, or traveling physicians either. “I know they are trying to accomplish transitional housing,” he said. “I think that’s an important step for an employer to be able to have.”

During a GVH hospital board update to the county the following week, GVH CEO Rob Santilli described circumstances where recruiting doctors, physician assistants or “high-end technical staff” can hinge on the hospital offering housing.

Messner emphasized that “The goal of this particular publicly funded affordable housing project is to offer those in need a long-term lease,” and he held firm on the six-month window during which the hospital could allow a newly recruited employee to live there despite higher income.

“This physician issue is a problem. But I think there are free market units that could be used for that. This is for the nurses, techs, staff,” Messner said.

Santilli said he feels a little crunched with the high-end technical staff, who are basically earning less than $100,000 and fall into a category outside of affordable housing eligibility but struggle to find a reasonable rent situation.

“Yes, there’s a cliff where you qualify and then you don’t qualify,” acknowledged Messner.

Mason said he understands that it is challenging to move somewhere and then have to move again six months later.

“I feel pretty firm on the 160 percent AMI for the long term. I would be willing to negotiate maybe a few more months in here, maybe eight or nine months—but less than a year,” he said.

Commissioner Jonathan Houck wondered if these recruitment needs would continually preclude the unit from being used for affordable housing, to which Santilli responded, “For 400 employees, one unit doesn’t make much difference.”

“I think that we’ve got to be careful with letting the hospital make this exception,” said Messner. He and Houck both said they felt six months was enough of an exception for the unit to be out of the affordable housing pool, and warned that the unit may continually be used as transitional housing for new recruits and not get occupied long-term.

The parties agreed to maintain the six-month exception as a compromise, and agreed that the contractual arrangement could be revisited every few years.