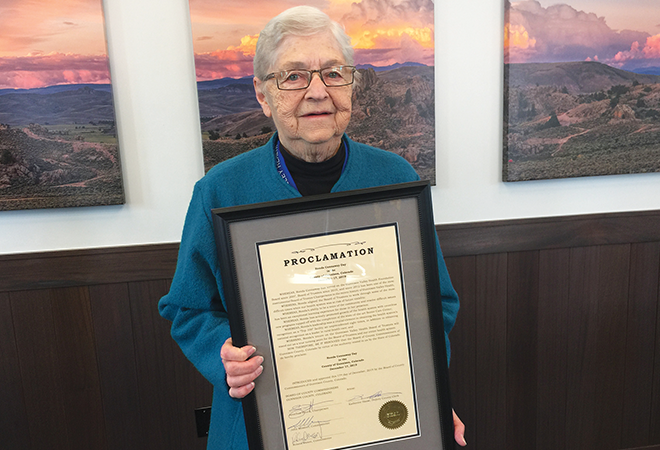 Gunnison Valley Health is reflecting on how to retain employees, celebrating successes and considering hospital payment structures in the face of high healthcare costs.

In a quarterly update to the Gunnison County commissioners on Tuesday, December 17, GVH representatives described the third-quarter activity, coming changes and 2020 budget overview within the overall hospital system.

Chief financial officer Mark VanderVeer went over the numbers and budget projections, showing that for the year to date (as of October), the hospital system earned $8.31 million on a budget of $7.90 million, increasing this year’s net income by $415,000 from last year. Gross patient revenue is expected to increase in 2020 by $6.9 million to a total of $110.4 million, the majority of which is being generated by the hospital due to an outpatient volume growth. Operating expenses are expected to increase by $4.4 million in 2020 to $57.5 million.

GVH board of trustees chair Ronda Connaway described the recent $160,000 donation that local organization Tough Enough to Wear Pink (TETWP) made to the hospital on behalf of breast cancer awareness, prevention, detection and treatment, as extremely beneficial.

“That organization has really been good to us and has done all sorts of things to make it possible for us to provide better, more up to date service for women in the valley,” Connaway said. The donation will help purchase equipment for special procedures otherwise found in Denver or Montrose.

GVH chief executive officer Rob Santilli also described the hospital’s mammography department as a great success, with a dedicated mammographer who has created a high mark combination of services.

Santilli discussed the latest review of the hospital for its Level IV trauma status as well. He said the review was comprehensive across the emergency department and beyond, comparing GVH to hospitals in other ski areas and overall state trauma regulations. Santilli said a lot of consideration goes into transferring trauma patients out of Gunnison because the rural location makes those transfers much more costly, time intensive and in some cases a higher risk to patient outcomes. He said the review process reiterated that Gunnison is well equipped to handle many trauma patients in-house.

“There’s not this kind of support in many of these rural areas… A lot of education has come from this in a way that I believe [others] should take a page from what Gunnison has been doing,” Santilli said.

Rate setting for the future?

Santilli addressed the high healthcare cost concerns of patients. He said Governor Jared Polis’ hope to have a public option insurance plan by 2021 is shaking up the industry. “This is causing quite a stir among hospitals across the state because the way the governor has designed this plan is getting into what many of us might term as rate setting,” he said.

Santilli said that while some hospitals overcharge, Gunnison does not and some hospitals are questioning to what degree healthcare is based upon the set rate. “I do think the Denver area hospitals have overcharged to the point where a lot of the rate setting they are talking about is higher than the rates that we charge,” he said, and concluded that rate setting is not the answer.

“There is this sensitivity that all hospitals are not the same and that if you reduce the rates for many of the Western Slope hospitals they won’t be successful. And some have weighed in that they should be exempt or will need additional support… That is not our situation. I started to learn that Western Slope hospitals are charging generally much more significant charge structures than what Gunnison has been charging,” he continued.

County commissioner Jonathan Houck recalled a time when prices seemed better in Denver than in Gunnison. Santilli said prices are now easier to accurately compare. He said hospitals are increasing transparency with their rates, and some of the most expensive, such as Vail, are getting considerable flack.

“I think that actually hospitals just charge so much… All hospitals throughout the state are going to have to go through a transition,” Houck said. He said how hospitals have gotten to this point is a complex issue, but it’s possible to get back to a reasonable place. He described an Oregon model that limits annual healthcare cost increases to a maximum of 3 percent, which he believes would solve the overbuilding trends within the industry that has been under national scrutiny lately. But he also admitted he was speaking a bit off the cuff.

“And everything I’m saying is probably contrary to what this association wants out of this meeting,” said Santilli, who was met with laughter from the board of trustees alongside him.

Santilli also reviewed efforts to get more permanent staff, particularly at the Senior Care Center. He said they are re-framing the role of certified nursing assistants in particular, to be more a long-term part of the system. This includes offering higher wages and support systems such as mentors and continuing education and using a more careful selection process. He said the center has begun implementing this and he believes it will create more worker longevity.

“That’s a culture shift within the organization,” said Houck. Commissioner Roland Mason agreed that the “living wage” and stable employment option approach fits with the county’s focus on economic development that is not tourism-dependent as well.

Finally, the commissioners recognized Connaway for her extensive contributions to the hospital system over the years. Santilli said Connaway had been instrumental in aiming higher for the hospital and had helped lead it into the ranks of the top ten rural hospitals nationwide.