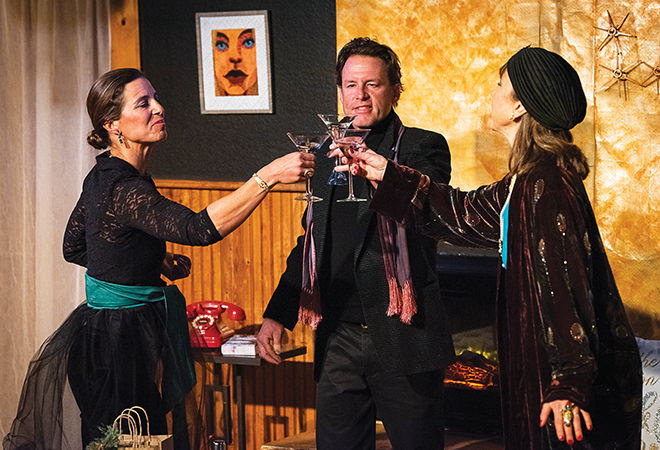 A fun, witchy love story that will amuse you for the holidays. Only three nights left.

Any witch worth her weight in cat whiskers can cast a love spell, but in Bell, Book and Candle, a romantic nudge can backfire when the witch herself falls for the one she’s charmed. This enchanting play is directed by the effervescent Mary Tuck and features some of Crested Butte’s finest and most seasoned actors.

First appearing at the Ethel Barrymore Theater on Broadway in 1950 and written by John Van Druten, the play ran for 233 performances with its final curtain in 1951. The author was quoted as saying, “Originally Bell, Book and Candle was a rather more serious play, but then I asked myself, what constitutes witchcraft? And I felt the answer lies in the fact that witches primarily seem to exist for their own self-gratification. However, one has to stop living in terms of ‘self’ if aspects of love are ever to be realized.”

If you were part of the 1960s TV series generation, you might recognize more than just a reflection of Bell, Book and Candle in the popular show Bewitched, as the series was, in part, inspired by the 1958 movie (released on Christmas Day) based on this play. The concept of witches living as mortals, or in romantic relationships with mortals, is not new, nor is the phrase “bell, book and candle,” which dates back to 14th century excommunication ceremonies. Shakespeare also used it in his play, King John: “Bell, book, and candle shall not drive me back/When gold and silver becks me to come on.”

But the modern day Bell, Book and Candle takes place in 1950s Murray Hill section of Manhattan, with clandestine witches living unsuspected among the population of New Yorkers. Gillian Holroyd (Christa Meilak) is a gorgeous, sultry and exceptionally talented witch with a reputation of powerful and successful spells, although they do seem rather self-serving or vindictive, like conjuring up an entire month of booming thunderstorms solely to render anxiety to her storm-fearing college roommate and rival, Merle.

In an apartment upstairs from Gillian lives a handsome publisher, Shepard Hensderson (Michael Weil) for whom “Gil” has a strong limerance. Gil’s brother, Nicky (Ian Wrisley), is also a free spirited “warlock,” although not as powerful as Gillian; he’s snazzy and outgoing.

Their eccentric Aunt Queenie, aka Miss Holroyd (Emily Rothman), who, in-between coven meetings, uses her magic to essentially break into Shep’s apartment to rummage through his belongings to find out who he is and what his life is like—and is the one who discovers that Shep is engaged to none other than Merle. Shep comes to Gil’s apartment to complain he’s found her aunt in his aparement, and Gil’s infatuation with Shep intensifies.

Gillian casts her love spell on Shep, which starts an unexpected chain of events. She uses her familiar, her cat Pyewacket, to do her magic and as Shep comes to her apartment once again to use her phone, since his is magically out of order, the spell takes hold and he falls inexplicably head over heels for Gil, entirely ditching his fiancee’s family Christmas party, where they were to announce their engagement.

In between his swooning and romancing, Shep mentions to Gillian that he wants to publish the popular, best selling author, Sidney Redlitch (Jack Mangan), whose current publisher’s contract is expiring. Even though she doesn’t know Redlitch, whose latest book is to be about witches in New York, Gil conjures up another spell to bring the writer to her so she can introduce him to Shep. Gillian’s brother Nicky becomes a co-writer, giving up more information about their secret powers than Gillian feels should be disclosed. When Nicky refuses to stop his collaboration on the book, Gillian and Pyewacket hex the book so that no publisher will print it.

Meanwhile, the lovestruck Shep discovers not only that Gillian doesn’t really want to marry him but also that she’s a witch who put a potent love spell on him, primarily to spite Merle. The truth is, Gil actually has fallen in love with Shep and for a witch, at least in this story, love spells disaster as witches lose their power should they succumb to true love (sort of the opposite of the power of “true love’s kiss”). What unfolds is definitely worth seeing—although you might not agree with the ending if you sided with the philosophy of Endora, Samantha’s mother on Bewitched. And you might ask yourself, is there really such a thing as true love and how much would you be willing to give up for it?

Nevertheless, you will love the actors’ portrayal of these lively characters. Christa Meilak is delightfully bubbly, coy and a rather deliciously sinister Gillian. One can’t help but love Emily Rothman’s Aunt Queenie, inquisitively sweet and sophisticated with powers of her own. Ian Wrisley sort of plays himself with Nicky’s character—hip, suave and with a twist of magic, he delights in his sister’s menacing spells, but you do get the feeling that he would never impose his will on others. Michael Weil pulls off the irresistible love-struck publisher, Shep, quite convincingly and delivers a potent performance of a confused but strong-headed Manhattanite. And let’s hear it for Jack Mangan’s muttonchops and his perfection in downing several straight whiskeys as Sidney Redlitch. He paints his character in rationed pomp and appropriate fear wrapped up with a bit ‘o accent. Pyewacket was simulated by a fuzzy stuffed cat (not a real one—no newts, frogs, dragon talons or other animals, real or imaginary, were harmed in this production) but perhaps a live actor (not a real cat), maybe a human in a onesie would have been fun. Afterall, Pyewacket had powerful magic worthy of his name, a spirit who was one of the supposed familiars of an alleged witch accused by the witch-finder general, Matthew Hopkins in 1644 in Essex, England.

The stage setting beautifully accomplishes a true Manhattan apartment feel, designed by Mary Tuck with major thanks to Lisa Santelli and the Princess Western Design Company for their furniture loan. Beverly Jordi did an excellent interpretation of the witchy wardrobe (not borrowed from Stevie Nicks) with its flowiness oozing everything a modern 1950s witch would want, with sparkles and dangles and bangles. The stage manager is Alissa Laney.

Mary Tuck is well-known as a talented director with too many productions to list here in her long association with the Crested Butte Mountain Theatre. She is a superb actor and singer, having also performed in numerous plays here and nationally. As if those skills weren’t enough, the sassy Miss Tuck is an artist in a multitude of mediums in fine arts as well. She may or may not be a witch but one thing is certain—she has powerful magic. Go see Bell, Book and Candle at the Mallardi Cabaret before somebody throws a spell on you.

There are three performances left at the Mallardi Cabaret at second and Elk in Crested Butte. Doors open Thursday, Friday and Saturday, December 19-21 at 7 o’clock with showtime at 7:30pm.