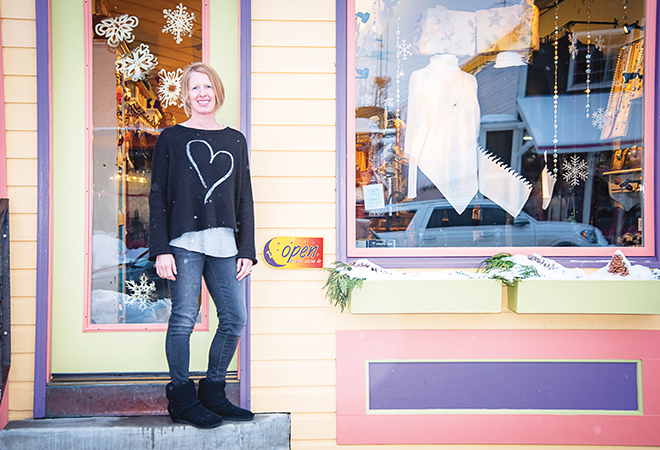 Fashioning a rich life in the mountains

Missy Ochs was rather British until her second birthday, when her military family moved from a base in England to Lowry Airforce Base in Denver. Her father had been in three wars—WW2, Korea, Vietnam—and the invasion of the Bay of Pigs in Cuba. Her mother, Missy says, was a worldwide ski bum who wanted to retire in a place that she could pursue her love of the sport, so Missy grew up skiing Vail, Breckenridge and Winter Park. As a child, Missy was quite athletic, kicking a soccer ball around and putting in a lot of pool time as a swimmer. Her mother imparted the love of art and culture, motoring the kids out to events in a VW pop-top camper all over Colorado because she loved to go places.

When Missy graduated from Arapahoe High School in 1990, her first college choice was Western State College in Gunnison (now Western Colorado University). “It was the closest to a ski area and I received a scholarship for academics,” she says, which all fit perfectly into her future plans to study sports-related kinesiology as applied in sports performance. She took many classes in recreation, biology and physiology, also figuring a business minor would complement her studies.

“I wanted to do physical therapy for sports. I was skiing five days a week with the college freestyle team. We skied Monarch, where we trained twice a week, and on weekends and Wednesdays.”

She was on a “Western Scholars Year,” which is essentially a semester system that stacks classes all summer so students could get in as much skiing as possible during the winter semester without having to deal with a loaded class schedule. “The team competed under the United States Ski Association [USSA] and traveled around the state,” she explains, noting that it’s a competition of mogul, aerial and ballet skiing, although none of the team did ballet. Missy also judged the freestyle skiing for the USSA for an entire decade, from 1995 to 2006. She graduated with a bachelor of science degree in kinesiology in 1994.

After graduation, Missy chose to stay in Gunnison. “I didn’t want to leave,” she confesses, because she loved the area. She was working as the assistant manager at Joseph’s, a restaurant east of Gunnison, and in the summer she was slinging burritos and scooping ice cream while silkscreening tee shirts at the Seabar in Gunnison. Surprisingly, Missy wasn’t a mountain biker yet. “At the time it was so new—and it hurt!” she laughs. “We were still riding rigid frame hard tails.” But she was skiing, working and hanging out with friends, living the mountain town dream at 21 years of age.

The following year she moved back to Denver to continue her education but, she discovered, “It was very competitive to get into physical therapy school. You were wait-listed. Spas were just starting to become a viable business opportunity, so my focus was spa development, which essentially covered needs assessment to operational start ups.” She received her master’s degree in hotel and resort management from the University of Denver in 1996 and did her internship with the Oxford Hotel and Spa in Denver.

“I worked for Dana Crawford, who was involved in the development of Larimar Square, the Union Station revitalization and the loft concept of LODO. It was such a great start,” Missy says of her three years there before moving on to Hotel Monaco to help with their start-up when they opened a spa in 1997.

Cramming in as much mountain time as her demanding corporate jobs would allow, she was snowboarding with her buddies, doing the I-70 corridor ski resorts on weekends when one day, she hit the wall. “I totally bonked on the corporate vibe. I was driving in traffic to get to work, and from 1994 to 2000, I worked in four different hotels. All of a sudden, it all felt empty to me and I just wanted to travel,” she says.

Her father had just passed away, and she took to the highway, driving north to Canada. “I hiked across the Olympic National Park for 27 days with the National Outdoor Leadership School [NOLS]. If I wasn’t going to work I wanted to do something that would be life enhancing so I did two courses,” she says of her gap year.

The second course was a high-end biking vacation experience with a company called Backroads. “We started in Golden and rode to Banff, Canada. It was a six-day trip and it just blew my mind.” She was moved enough to stay on as a guide for two years out of Berkeley, Calif. because she felt, “I loved hospitality, loved having unique nature adventures and Backroads was the number one company in the industry. I guided in Glacier National Park in Montana, Yellowstone National Park and the wine country in California,” where, she grins, she fell in love with wine.

In the winters she skied Jackson Hole, returning to the valley and Crested Butte in 2003, where she was hired to work on reopening the Irwin Lodge. “Irwin was looking for someone to do due diligence, to see if the project was viable. We got far into the process and were close to getting approval when the owner’s business interest took him in another direction,” she recalls. Eleven then bought the property and Missy worked for them for two years as general manager in 2007, handling acquisitions and reviews from sewer and water issues to land boundaries and real estate interests. “It was fast and fun. I really enjoyed working for them.”

But once again, Missy had that same realization. “I bumped my head against that corporate ceiling again. I was working all the time. I don’t live here for that. I would rather be conscientious with my lifestyle than spend all my time working, so I went into real estate during the recession.” Working for six banks, Missy dealt with foreclosures and distressed properties from here to Chaffee County. She still sells real estate.

Milky Way, the high-end fashion boutique on Elk Avenue with its colorful façade and vivid flower boxes, was opened in 1994 by Deb Cheesman. Missy had worked for Deb during the holidays in the shop, helping out during the high seasons, “So I could have access to clothing since I love clothes and fashion. I always have. It was another interest of mine, everything from couture to the new black legging craze.” When Deb decided to sell in 2011, Missy bought the shop. “The timing was right and the package was right for me. What keeps me impassioned by my work is the women I get to work with.”

Missy says she’s intrigued with the intricacy of the work, as trade and materials evolve to more environmentally friendly production and quality. “It’s an ever-changing industry. Fashion is always changing, from color and style to fabrics. I’m trying to focus on environmentally conscious companies. I buy their products and if I’m supporting them, hopefully that will help them continue their products. The fashion industry doesn’t have a very positive carbon footprint in general, but I think it can. It helps if you focus on U.S.-made, fair trade, and eco-friendly companies. And my business practices help. I’m energy efficient, I practice water conservation, recycling, resource management, I ride my bike or walk to work, along with most of my staff, I use alternative transportation. And in business management, meaning how I buy, I try to work with companies who are conscientious. You try to find ways to make a positive impact in life because I feel it’s the little things that make a difference.”

In 2003 she met Dave Ochs while riding in the Cannibal Classic from Crested Butte to Creede. “It was me and 14 guys,” she laughs. “I preferred road riding but then I kind of realized there was only one road here.” When she and some friends gathered to ride the notorious 409 in the spring of 2004, Dave Ochs was also on that adventure. As for the 409, “It was brutal,” she winces. But it was during Fat Tire Bike Week in 2004 when the two actually fell for each other, “and we’ve been together every day since.” They married in 2007 and their son, Ozzy, was born in 2011 with Cadence joining the family in 2013.

“If I were to do my business career over again I’d try to start my own business right off the bat because the rewards then are yours. You are what you put into your own business and I love my business, it’s fun. I get to dress up, learn about different regions of the world, different fabrics. I get to travel and I get to be around women all the time, which is awesome. You shape your own destiny. I’ve learned so many things.

“I love my life,” Missy continues.“I have a good life here and I’m really grateful for my support. I’m doing exactly what I’ve always wanted to do in my life—to own my own business and to live in the mountains. I have a really fine family. I get to bike and ski every day. I have great friends here. It’s community and lifestyle. My lifestyle is my community because the friends I have do what I love to do and are such good people. We share that high alpine value system. Knowing that my friends had an amazing experience in their day as well, whether it’s walking to the Gronk or even just going to the post office, it’s gratitude and celebrating Crested Butte goodness.”

Share
Previous Like it or not, second homeowners are part of the community—and division hurts community
Next Rock on Ice returns to Mt. CB