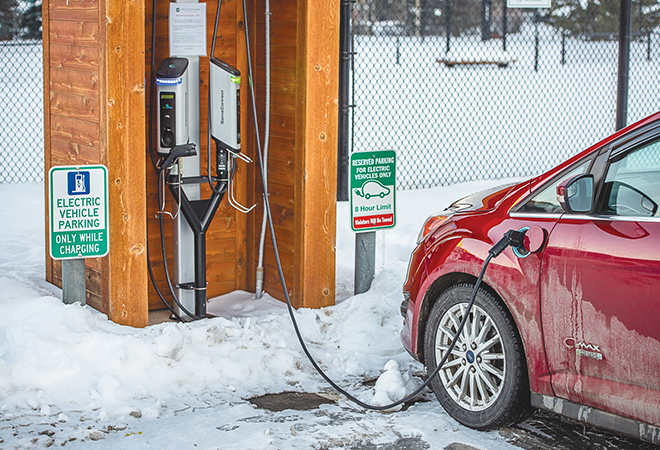 Getting a charge in CB will be easy

Rapid charger on the way

Crested Butte is increasing the opportunities to charge electric vehicles and by the end of this summer could be considered a major charging hub for electric vehicles (EV). There are currently two charging stations in town, between the lot by the tennis courts at the Four-way Stop and the public parking lot at First Street and Elk Avenue. Those Level 2 stations take between four and eight hours to recharge an electric car’s battery.

But this summer a new rapid charging station will be coming to Crested Butte and that station could recharge a battery in less than an hour.

Community development director Michael Yerman told the Town Council that a partnership with the Gunnison County Electric Association (GCEA) would facilitate the rapid charger to be located in the public parking lot by the Crested Butte fire station. Such a station could charge an electric vehicle in 30 minutes.

“The Colorado Energy Office has identified Crested Butte as a priority area for an electric vehicle rapid charging station due to our location along a scenic byway,” Yerman informed the council in a memo. “There are limited locations in town with public parking and the necessary electric infrastructure available. GCEA and the town have identified the lot by the fire station as the preferred location.”

GCEA will be submitting a grant application for $30,000 to the Charge Ahead Colorado program. The GCEA would administer the grant, manage the charging station and commit $10,000 to the project.

GCEA chief executive officer Mike McBride said the action makes it easier for people to drive electric vehicles. “GCEA is excited to partner with the town of Crested Butte to provide a fast charge option for EV drivers. We recognize transportation as a critical area of focus in the town of Crested Butte’s Climate Action Plan,” he said. “GCEA members are also increasingly interested in taking action. We believe a robust public charging network makes it easier for both locals and visitors to drive electric vehicles. As GCEA’s power supply becomes more and more renewable, electric vehicles become an increasingly beneficial choice, and GCEA wants to make that viable for its members.

“Most EV charging occurs at home while owners are sleeping, etc.,” McBride continued. “And GCEA’s existing network of eight Level 2 charging stations goes a long way to filling the need for charging away from home. The planned DC fast charger takes it to the next level by charging batteries much faster, approximately six to eight times as fast as GCEA’s existing stations.”

The town will provide the location and commit the balance of the funds necessary for the charging station which is expected to be about $35,000 to $40,000. Those funds will come out of the town’s Climate Action Plan budget. The goal is to install the DC fast charger this summer.

“We want our community to be a beacon for zero tailpipe emissions in both the private and public sector, and we believe the increase in availability of public charging stations, especially rapid charging, will make a significant impact in that effort,” added Crested Butte planner Mel Yemma.

She noted that more Level 2 charging stations are slated for installation in the Town this June. Last fall, the town of Crested Butte received funding from Charge Ahead Colorado to install additional charging stations. Two Level 2 stations will be put in at the Town Hall and at the Crested Butte Marshals’ Office this summer. In the town’s five-year capital budget, five marshals’ vehicles and a town employee vehicle are up for replacement. All of these vehicles will be converted to electric and utilize these charging stations. The Marshals’ Office will be replacing one of its vehicles this year; they are currently planning to test a Tesla Model X vehicle later this winter to ensure that it works well within the town’s climate and with the marshals’ technical requirements.

“In keeping with the greening of town, they wanted us to look at electric vehicles for patrol,” explained chief marshal Mike Reily. “We looked at the potential all-electric vehicles and found a few which might meet our size and mobility requirements. Of the SUV models offered, only one, the Tesla X model, was a U.S.-made vehicle. We decided to explore the X as an option and will hopefully get one from Tesla soon to test and evaluate before we make a final decision on the 2020 purchase. Based on our usage patterns we believe the Tesla will be able to perform as a police car but getting our hands on one this winter will tell us whether that is true or not.”

The Town Hall charging station will be available to the public and will be free to use for 2020 and then on the same rate structure as the other two public charging stations. After installing this station, the town will transfer ownership of the station to GCEA.

“The town and GCEA have had a very positive relationship collaborating on installing electric vehicle charging infrastructure. We all agree that with these additional charging stations that Crested Butte is becoming a hub for electric vehicles and that will have sufficient public EV changing stations for the time being,” concluded Yerman.