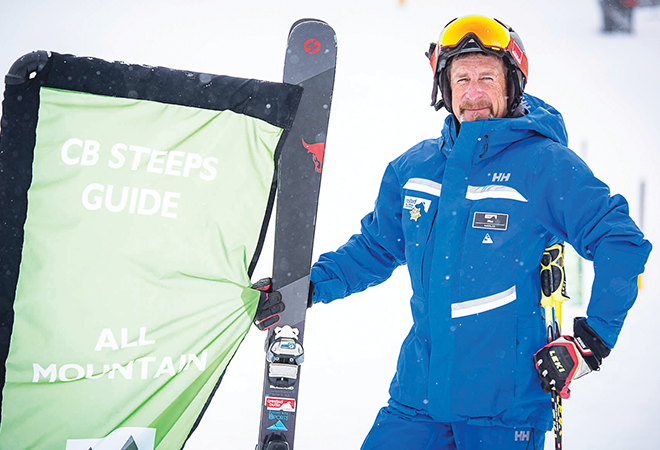 A king among ski instructors

Dave McGuire’s Crested Butte Mountain Resort name tag says he’s “David” and tourists will swear that he wasn’t their ski instructor because the guy they skied with was “Mac,” the nickname McGuire was given as a kid in Little League. Born in Deer Lodge, Montana, Mac grew up at 10,200 feet elevation in Leadville, Colo. until he was 12. His dad worked in mine safety and heath. When Mac was young, the family took hikes, explored, climbed, and by the time he was 7, Mac had already summited Mt. Elbert, the highest point in Colorado.

Both Mac’s parents worked at ski resorts on weekends. His mom, Gwen Nixon, was a ski instructor at Cooper Hill and his father was ski patrol at the now-defunct Meadow Mountain ski resort in Minturn. Naturally, Mac was skiing before he was 2 years old. “We had a long driveway that the plow guys would leave snow mounds and Mom would pack it and smooth out a run for us to ski on until we were old enough to get on the ski areas. I was 3 when I got to the resorts.” From the age of 5, Mac was on a ski team and says, “I continued to do that the rest of my life.”

One of Mac’s favorite things to do during summer was learning about trains. “Dad always took me out to watch trains go by. The tracks are still there on Tennessee Pass,” out of Leadville, Mac says. “There’s a tunnel at the top of Tennessee Pass, which is where Ski Cooper is, and on the other side of the tunnel is Camp Hale, where the 10th Mountain Division trained.”

Mac remembers how excited he was as a kid feeling the rumble and roar of those trains going up the pass. “It was a steep grade of the pass and one time in the 1960s, there was a train that came over that had 18 locomotives pulling that one train and that’s a lot of noise and power.” The last train went over Tennessee Pass around 1989, he recalls.

When his parents split, his mom packed up the kids, moving to San Juan Island in the Puget Sound. Then when she remarried a friend from Leadville, they moved to Aspen. But in 1973, Mac explains, “Aspen was too expensive for dual parents working, so we moved back to the Pacific Northwest, first to Seattle and Belleview and eventually back to San Juan Island to a town named Friday Harbor.”

Mac felt that living on an island was uniquely cool, but isolated. “You’d have to park your car in a line and wait for the ferry to the mainland, and then you’d have to drive for a few hours.” Because of the time and distance to ski resorts, Mac became a beachcomber instead. “I became an enthusiastic agate finder. I’d walk with my head down for hours on the beaches,” he says. The water acted like a stone tumbler and polished the rocks. “They’re beautiful, all different colors. Mom would take us to all these great beaches to hunt for agates.”

Island life dictated that Mac couldn’t be on an organized ski team, “but I took many an island friend and taught them to ski,” he says. He graduated from high school in 1979 as valedictorian, and had become a successful competitive runner in school on the cross country team, running distance and track. “There were a few northwestern colleges interested in both my academics and running, but my stepdad, Jack Nixon, told me about a school in Colorado called Western State College right near a great ski mountain.” And with that, he turned down all the scholarships and applied to Western because he wanted to get back to ski racing.

In that era, Western had the strongest team in years, competing for national championships. Mac hadn’t raced in years so his game was off and he didn’t make the team; however, Western created their first B team. “So I got training and was able to stay on the team. We couldn’t compete collegiately, but we B teamers took on other competitions. We’d try to qualify for pro races all around the state— unsuccessfully,” he laughs.

He started successfully competing in the Colorado Pro Mogul Tour in the early 1980s, making it to round eight several times for prize money. He also ran for Western cross country and track team for Duane Vandenbusch. In his junior year at Western in 1981, Mac got a part-time job at the Crested Butte Mountain Resort ski school and says, “My upper education took a backseat to working at a ski area after that.”

He left college to work full-time at CBMR. During the summers he worked on construction crews on Mt. Crested Butte that built Elevation, The Plaza and Wood Creek. “I ended up on a pile driving crew driving steel H-beams over 100 feet into the ground to produce stable foundations.” When the golf course was proposed in Skyland, Mac got a job landscaping and after its opening, he became greenskeeper (and golfer) for the next eight summers, utilizing his high school experience when he worked on the San Juan Island golf course. For about six years in the mid to late 1990s, Mac became a carpenter apprentice, building custom homes for Bob Huckins.

Mac met his wife, Kelly Ervin, back when the Crested Butte male to female ratio was five to one in 1988, “So every guy in town was after her,” he laughs. “I had had my first major ski injury, a blown ACL, and was walking to work at the ski school every day on crutches. Kelly would drive by me every morning and wave until finally one day she stopped and offered me a ride. One thing led to another and we were married in 1989.” Their son Connor was born in 1991, and daughter Ali came along in 1996.

Mac decided to really push his skiing career. “I knew I could always have a career in teaching but I knew I could take it to another level.” After getting all his instructor certifications he became an examiner for Rocky Mountain Professional Ski Instructors of America (PSIA) in 1993, and he was still a ski instructor.

A close call in the late 1990s had Mac reexamine his race choices. Extreme skiing had just cranked up and Crested Butte hosted the first National U.S. Extreme Championships. “I competed in the first eight, making the finals every year,” Mac says. The eighth year competition was held in Big Hourglass, “which had never been open to skiing and is still closed today because it’s just really, really steep and doesn’t hold snow real well,” Mac explains. But it was an ideal venue for the championships finale. “It was in that event that I took a fall in Hourglass that ended me in a bad spot clinging to the edge of a cliff. It was like a hallway of rock and there was no way up or out on either side. I realized the only way out was to drop down. The crowd was silent, and one person yelled out, ‘You’ve got kids,’ which I heard very clearly. So I dropped in. I hit the snow, which immediately shot me back into the air, and as I was flying through the air, through the walls of the rock hallway, my right ski edge caught the rock wall, putting me into a horizontal spin 30 feet into the air. I flew back into crowd view, having missed all of the trees, landed in the snow, got up, skated to finish line and signaled that I was done competing for the rest of the day. Thus ending my career as an extreme skier.”

The impact of the rock wall at that speed jammed his leg up into his hip socket so severely that it split the socket. Ten years later, on his 50th birthday, he had that hip replaced with a steel one.

The outdoor mountain life is hard on a human body and Mac’s had more than his share of injuries, reconstruction and replacements from skiing, mountain biking and softball—a few ACL surgeries, both shoulder reconstructions and replacing that steel hip with a titanium one in 2018 when he fell on it so hard while running bases that it came apart. Last ski season, he realized that his left knee wasn’t holding up on the slopes, so that was also replaced this New Year’s Eve.

“Then last June, I signed up to do Ride the Rockies, roughly 500 miles. I rode really strong and felt like the next chapter in my skiing career was off to a good start,” but, he tells, “I went back to playing softball and got taken out running the bases when a player fell on me.” That incident dislocated and fractured his femur and tore the meniscus, cartilage and knee ACL. He’s recovering from that July surgery and says defiantly, “I should be skiing by February… but I think I’m done with softball.”

Mac has been a ref and coach for soccer and hockey for over 20 years. He also coaches and refs Little League as well as adult softball. “I’ve done that for 30 years because I want the kids to be able to play and they can’t without officials. So all you parents out there, think about becoming an official,” he encourages.

His early childhood love of trains has led to Mac’s hobby of being a model railroader, with an extensive layout in his attic with hundreds of cars and locomotives and tracks. He’d like to see this history installed in the Crested Butte Community School, like “an opportunity to put a small train layout in there that kids could run that might build more interest in what I think is a very fun hobby.” He was one of several who put together the popular train diorama at the Crested Butte Heritage Museum, which he dreams of expanding to include the Floresta breaker and the Anthracite turntable someday.

Mac has gained an honorable fame from last year’s 2019 Flauschink celebration when he was crowned King Dave. “At the end of every ski season, I usually go work in Vail and other ski resorts after we close so I’m never around for Flauschink. But this year, being injured, I was,” he says, which created the opportunity for the Flauschink committee to snag him. “I couldn’t ask for a better Queen, Queen Krista. We’ve done all we can to outdo all other royalty by being at as many events and activities as possible. We’re having a blast doing it. After all, it won’t be too long before we’re Royal Has-Beens.”

Having been a local for quite some time, Mac feels, “I’ve always loved the fact that Crested Butte is harder to get to; thus, people who really wanted to come here maybe have that same desire to get away from the masses and be someplace they can explore.

“And it still always comes down to the great people I’ve gotten to know and live with all these years and the effort involved in living here,” he says of the community and challenges of living at 8,885 feet. “Everybody who can do that has what it takes to be a Crested Buttian.”