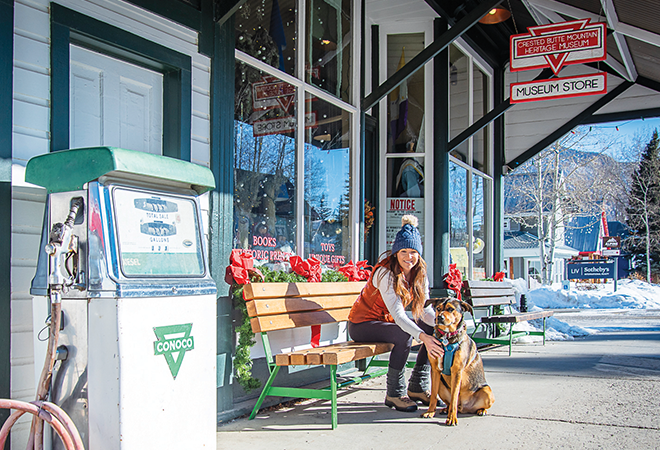 Coming back to the mountains

Upstairs in the gabled offices and archives of the Crested Butte Heritage Museum, among the treasures and relics of bygone days, Kelli Councilman has a dozen or so photos from her childhood spread across her desk. In the photos, she points out how there are empty spaces between the houses, there are still fields beyond Seventh Street and the homes aren’t nearly as polished and proper as they are these days.

Kelli was born and raised in Crested Butte. Her father, John Councilman, arrived in the valley in the mid-1970s. Kelli’s mother, Lisa, met John at the Grubstake while on a ski trip from Houston with a gaggle of her girlfriends. Two weeks later, Lisa moved out to Crested Butte and the two married in 1980, spawning three daughters, Kelli, Kerri and Kaitlin. Kelli’s father owns JCI Excavation.

In her childhood, Kelli recalls, “We were outside all the time—in the snow, in the woods, literally running around in the forest, unsupervised. We’d play in the park by the Arts Center, in the willows by a little stream.” Her mother would call the girls home from the back porch of their home on Elk Avenue. On Seventh Street was “The Pond” Kelli describes as gross. “We’d spend hours on a log, two at a time, trying to make it across the water on the floating stump using stick poles. No one ever made it across because you’d go flailing into the water. It would attract kids just walking by so there’d be a big crowd. Mom used to get mad but we didn’t care,” she laughs. It was an idyllic life for kids.

Growing up, the kids would camp and were part of Adventure Club. “The parents would sign you up and the club would take you out on excursion hikes and to historical sites on the bus. Once we broke down on Kebler Pass. We had a bunch of crazy kids running around in the aspens until help arrived.”

The “new” Crested Butte Community School was built in time for her to start seventh grade so busing to Gunnison was no longer required.

Winters brought skiing and, like most Crested Butte kids, Kelli was on boards from the age of two. She was a ski racer, cruising with the Little Giants and later she was part of the Cyclones. When she was 13, she switched to snowboarding. “When I got to middle school I started playing volleyball, basketball and track so that was fall, winter and spring that I was always in a sport.”

A tiny dancer from the age of four, she took tap, jazz and ballet with Bobbie Reinhardt and Heidi DuVal. “We were in the recitals every year and that was a big deal.” Kelli confesses that although it’s been a while, “I want to start dancing again. I just have to fit it into my schedule. There’s a good program here again, the Crested Butte School of Dance, and there’s hip hop on Saturdays.”

She graduated from Crested Butte Community School in 2003, and enrolled at the University of Colorado (CU)-Boulder, but had to take a bit of a break to return home for two years to recuperate from an injury. She had broken her back five times while snowboarding, the first time when she was 18. The fifth time, in 2006, she had to have her spine fused. “It put me out for a winter. I spent six months in recovery and my parents were helping me to recuperate,” but she points out that she was out for a full year. Afterward, she got on the Western State College girls snowboard club, the Bluebirds.

At a fundraiser at the Powerhouse (now Bonez), she met four friends and the five of them became traveling companions for a three-month backpacking and climbing trek to China, Vietnam and Thailand in 2008. “China to Vietnam was one of the scariest experiences in my life,” Kelli says, explaining, “We got on a sketchy bus and we were the only foreigners on this bus,” and to compound the feeling of being a stranger in a strange land, they weren’t allowed to bring their bags onboard so everything they owned was stowed in the compartments below.

“The bus was tall and taking these turns too fast over really crazy dark roads and south China Karst mountain passes at night.” She felt that the bus wasn’t equipped for mountain roads because, “They had to keep stopping to spray the bus down and throwing buckets of water because it was overheating and smoking. They were really harrowing roads going through undeveloped rural areas. We also had to turn our visas over to the driver and we didn’t know if we were going to get there with all our gear and visas or if we were even going to survive.” In the end, they did arrive in Vietnam, with all their gear and their visas but Kelli laughs, “It was definitely an adventure.”

As soon as she returned from her trek, Kelli enrolled at CU-Denver. “I ended up with a degree in digital design, finishing up at the Denver campus. I always had an inclination toward art. Digital design incorporates full graphic design as well as web design, motion graphics and video editing.” She graduated in 2012 and was hired as a freelance graphic designer by a woman in Los Angeles. Kelli grins, “I had to teach her how to work a standard coffee machine because she had only been to Starbucks.”

Her employer was developing long driving gloves to protect one’s skin. “It’s a very LA thing,” Kelli laughs. “I was doing the branding and packaging design.” While she was still in college, Kelli did a summer internship for Disney in Orlando, doing the edits for Disney editing photos. “It was a fun way to spend the summer and it led into my second job out of college, editing real estate photos. I was basically making properties look nicer than they were. It was a really cool job because I got to work from my home in Denver. As I was doing these jobs, I was keeping my eye on the job market because I wanted more consistent work than freelance.”

She found a permanent position at Forte Analytics. “There’s an ongoing joke in ‘Friends’ [the old TV series] where nobody knows what Chandler’s job actually is and that’s always how I felt when people asked me that question about Forte,” she says. “The design team was doing everything from designing print publications to websites to apps. I did a lot of the motion graphics, short videos and all the other print and web design.” She was promoted from production artist to assistant art director in the six years she was there.

Although she struggled to get into the mountains, returning home to Crested Butte only a few times a year for holidays, she was still enjoying Denver. “I loved the neighborhoods close to the city center, going to festivals and concerts, having all those city perks. I was a regular at the Museum of Nature and Science and I was right by City Park, and that was a great way to spend your day.”

It was love at first sight when she rescued her dog, Finn, out of Houston after the hurricane three years ago. “He was found wandering and flea-ridden and starving along the road.” Finn has quite a lot to say in his expressive playful growl-talk. “He’s always been vocal and talking. He’s my little sidekick.”

After a while, Kelli felt she had learned everything she could at Forte. “There was nothing exciting about getting up and going to work anymore. I had been developing an interest in vintage and antique furniture. This was about the same time that online market places were booming.”

So she decided to make her hobby a business. “I was able to buy and sell antique furniture for almost a year. A lot of my success came from being able to take good photos, writing compelling descriptions and why the piece is unique to convince people that they wanted to buy it. It was one of the most fun times I’ve had and I met the coolest people. People who are buying antiques typically have other amazing things.” Her business was totally opposite of what she calls, “My rigid cubical existence at Forte.”

As much as Kelli enjoyed her stint as an antique furniture dealer, she notes that it was difficult and, again, not consistent. Also, she hadn’t spent a lot of time with her family and she was missing them. “I decided to spend time with my parents and aging grandmother in Galveston, Texas, where my parents spend the winters, and my younger sister lives in Houston.”

She got a job with Yaga’s, a restaurant-events group that throws events like the third largest Mardi Gras in the U.S., on Galveston Island. “I was hired to do marketing and event coordination for Mardi Gras and that was a blast, but Texas and I don’t mesh,” she grins. Even though they offered her a full-time permanent position, she realized, “I didn’t have what I needed in Texas. I needed trees and mountains and a certain way of life. I really needed my nature fix.”

Kelli returned to Crested Butte in May 2019, planning to only spend the summer before heading back to Denver for work. “But after being here for two weeks, I decided that if I could find a full-time job, then I’d stay. And at that point everything fell into place.”

She was hired as store manager and marketing and events coordinator at the Crested Butte Heritage Museum. “I’m meeting awesome people and feel this is where the universe wanted me to be. Life had been kind of floaty and now it definitely feels grounded and right,” Kelli says. “I didn’t even realize until I came back what I missed so much about it here, like the things that people consider important here—the pace of life, health, an active lifestyle, support and sense of community. I enthusiastically got two ski passes, one from Crested Butte Mountain Resort, and I’m so excited to be able to take a bus for five minutes up to ski instead of fighting the I-70 shuffle. I also got a Nordic pass so I can take Finn out, which has been a blast and he’s never had more fun in his life. He has his own pass.” She glances at Finn, who gives an endearing growl of approval.

Kelli says there are some very big and important changes on the horizon for Crested Butte. “I’m educating myself on them. I’m thankful for finding this job. Being at the museum is a good place to be. I think purpose and passion is what you need to seek in life and your job is going to be a very large part of that so you need to have that. I do find that the museum puts me in a position where I can make some positive changes for Crested Butte. Our mission at the museum is to preserve and protect and make the past a living part of the future. I can feel good about that and what I’m doing here day in and day out.”