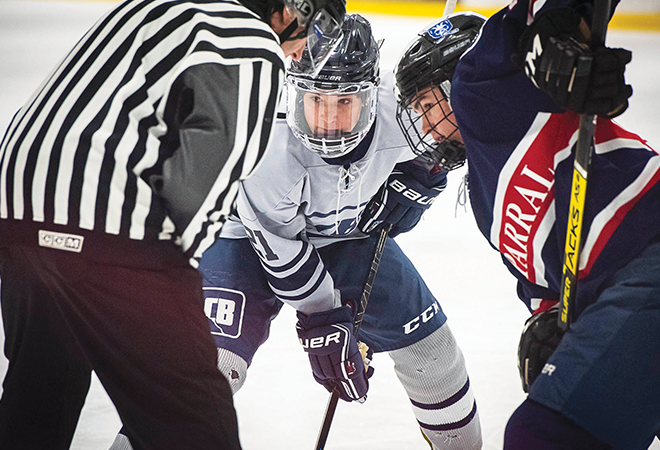 It was an auspicious restart to the season following the holiday break for the Crested Butte Titans hockey team. While they ran roughshod over two winless programs heading into the break, they ran into a buzz saw at the end of the break, at least for one period. That one period was ultimately all it took in the end as Crested Butte fell to Chaparral 4-1 on Friday, January 3.

The Titans regrouped over the break for a week of workouts leading up to the game and while coach Billy Watson did see some good things, he also saw some signs that players may have taken a break over the holidays as well.

“I thought the workouts were alright but some of the kids may have taken advantage of the break and didn’t really get on the ice,” says Watson. “It was noticeable and it showed in the first period.”

The first period of their game against Chaparral was brutal for Crested Butte. The Wolverines, ranked fourth in the state, were firing on all pistons and noticeably faster than Crested Butte, while the Titans struggled to get their skates underneath them. Chaparral scored in the third minute of the game, again in the fifth, a third time in the eighth minute and then finished the barrage with another goal in the 14th minute to build a 4-0 lead by the conclusion of the first period.

“I think the biggest issue was we weren’t moving our feet,” says Watson. “Plus, we’ve been harping on systems in our D zones and they spread us out and then were able to work the puck inside. We were overwhelmed and chasing the puck.”

After that first period, it looked like the Titans were in for a long night but the game changed directions drastically in the second and third periods. While Chaparral was noticeably faster to open the game, the Titans soon picked up their pace as well and were far more compact and organized on defense and finding seams up the ice with the puck.

“We talked about our defense between periods, changed things up a little and it seemed to work pretty well,” says Watson. “I think our guys rose to the occasion, simplified things and were more confident with the puck.”

Five minutes into the second period a pass up the ice from Chris Myers found Matthew Trujillo breaking free behind Chaparral’s defensemen for a clear lane to goal. The massive Chaparral goalie made the stop but the opening opportunity showed Chaparral wasn’t as invincible as their first period effort and Crested Butte continued to gain confidence. The effort of Braydon Duncan stood out all period as he continued to mix it up with the larger Chaparral players up and down the ice. One chance led to a couple of more quality looks on net but the Wolverines goalie made the necessary saves to hold Crested Butte scoreless through the second period as well.

“Our zone entries were way better and we had way more scoring opportunities in the second period—we just didn’t capitalize,” says Watson.

Crested Butte ultimately broke the seal on the Chaparral net four minutes into the third period when Sam Buckhanan slipped a long pass to Graham Barrett splitting the Chaparral defensemen and Barrett skated to the net to stuff the puck into the upper corner. That goal led to several more chances as the Titans defense held off the Wolverines attack but Crested Butte failed to score any more, falling 4-1.

“We adapted well and kicked it into gear,” says Watson. “Unfortunately we gave up four goals in the first. I think it showed we can hang with those guys.”

Crested Butte has three games this week with one against Resurrection Christian and then two games over the weekend against Summit. Watson is looking for his team to build off the second and third periods against Chaparral and take that effort into the next three games.

“I’m hoping to build on that confidence and see them playing almost with some swagger,” says Watson. “We’ve got to start believing in ourselves and in each other.”