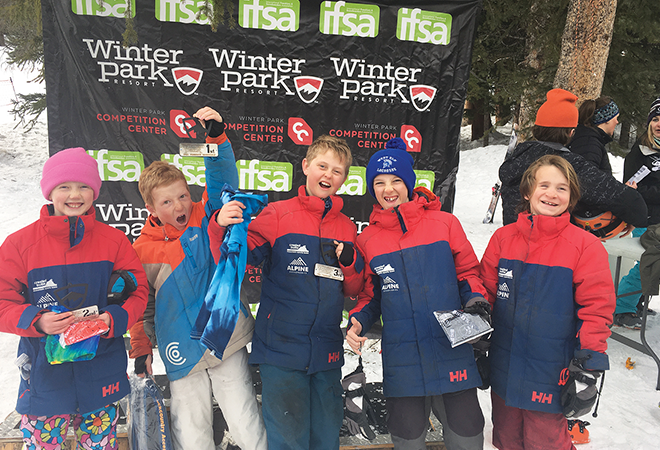 Things continue to ramp up for the Crested Butte Mountain Sports Team (CBMST) freeride athletes and coaches as they hit the road over the past two weeks for events in Taos and Winter Park.

Taos was quite the showcase for the CBMST as five coaches and 25 athletes spent almost an entire week there for two junior freeride regional competitions as well as a national three-star competition Wednesday through Sunday, February 19-23.

“It was a lot of competing in a short amount of time and we had a couple of kids who competed almost every day,” says CBMST freeride coach Grant Spear.

Once the snow had settled from five days of charging, the CBMST had racked up numerous podium finishes from the girls 12-14 age class up to the male 15-18-year-old age group.

Ella Haverkampf led the way for the CBMST in the first event of the week, winning the female 15-18 ski competition, while Isaac Huber had the top local result among male ages 15-18 class, coming in second place.

The CBMST then stepped up their game another notch in the next regional comp in Taos the following day. Dagan Schwartz stepped on top of the podium in the 15-18 age group snowboard comp and Haverkampf won her class again while the local male skiers ages 15-18 took over the second regional comp of the week.

CBMST athlete Kye Matlock edged out the win with local independent skier Brooks Hudson right on his heels in second place. The CBMST then took the next three spots with Carson Hildebrandt in third, Gus Bullock in fourth and Holden Bradford in fifth place.

The week in Taos wrapped up with the National three star event full of charging young athletes from throughout the west. Schwartz made another appearance on the podium, placing second in his snowboard division, while Marko Alling had the top result of the CBMST skiers as he placed third among the young men ages 15-18.

“We went here with a big crew and did really well,” says Spear. “I’m really happy with how everyone skied, no matter how they finished and for some it was their first competition and there was a lot of growth in their skiing.”

Meanwhile a group 21 strong of u12 athletes was in Monarch February 22-23 competing and racking up numerous podiums as well, including a sweep of the boys snowboard podium.

“Last year the u12 age class broke away from the older kids to have their own events with more focus on having fun and building experience,” says coach Mark Robbins. “The progression of the sport is just ridiculous.”

The CBMST returned home to continue training and then headed to Winter park Saturday and Sunday, February 29-March 1.

Athletes ages 12-14 and 15-18 competed and, once again, Schwartz continued his assault on the snowboard scene winning in Winter Park. Seve Petersen found his rhythm in Winter Park to take second place among skiers ages 15-18 and Avery Bernholtz ended up just one-tenth of a point shy of the podium, coming in fourth among the young women ages 15-18.

The heavy competition schedule continues for the next several weeks as the CBMST has coaches and athletes headed to Big Sky, Montana this weekend for a comp. Then the team splits, with some headed to Snowbird for a national event while other athletes will remain at home to defend their home hill at an IFSA regional March 13-15.

“The comp season is really ramped up right now,” says Spear. “I feel like we’re going to a lot more places this season, which is great.”