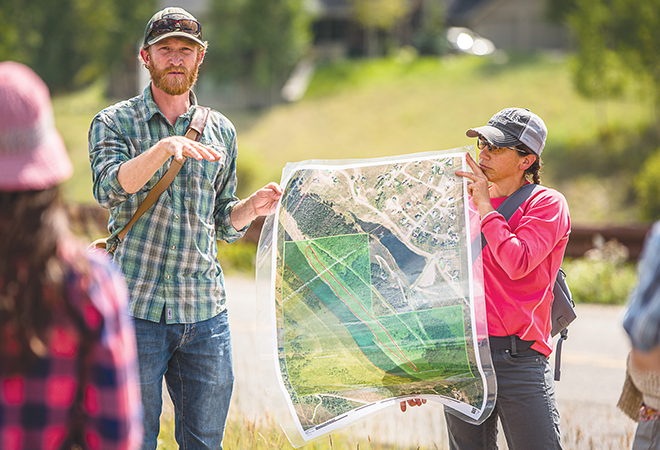 Partnerships made it work. Now it’s on to planning

The formal completion of the Long Lake land swap took place Thursday, February 27 when a cadre of stakeholders signed the closing papers. The innovative $3.3 million deal that took three years to coordinate will ultimately clean up some public land ownership issues, provide greater access and oversight to Long Lake near Crested Butte and help fund affordable housing projects in the valley.

“All the way around it is a huge win for local conservation, for access to public lands, for affordable housing projects. It hits so many boxes. It’s a unique project,” said Crested Butte Land Trust executive director Noel Durant.

“From the Trust for Public Land standpoint, Crested Butte and the Gunnison Valley is a place we have focused on for a long time so we are excited to be a part of this deal,” said TPL project manager Patrick Gardner. “It is a win-win-win.”

Logistics for the complicated deal began in 2017 with the public launch of the fundraising campaign starting in July 2018. Long Lake sits adjacent to more than a thousand acres of land conserved by the Crested Butte Land Trust. The 120 acres of national forest on Long Lake was prioritized for disposal by the USFS due to its small size and isolated location, surrounded by private land. The land trust, along with the forest service and the Trust for Public Land, assembled a transaction whereby the land trust would take ownership of the Long Lake property in exchange for private forest inholdings of equivalent value.

The entire deal involves the Crested Butte Land Trust, the U.S. Forest Service, the Trust for Public Land and the Valley Housing Fund. Basically, the land trust purchased 613 acres in Fossil Ridge from the TPL for the exchange and is contributing 15 acres on Copley Lake that it currently owns to the USFS. Both of these properties are surrounded by national forest. The USFS will transfer the 120 acres of property on the east side of Long Lake to the land trust. Given stipulations of the initial 2010 TPL Fossil Ridge deal with the original property owners, Butch and Judy Clark, the money from that purchase will then go toward helping affordable housing projects in the valley through the Valley Housing Fund.

While enough money was pledged to close the deal, the Valley Housing Fund is providing a four-year, $200,000 bridge loan to the CBLT to cover the multi-year pledges they received.

VHF president board Jim Starr said the whole thing has been a very positive endeavor. “It has been a very positive experience working with TPL who held title to the [Fossil Ridge] Clark property until it could be monetized,” he said. “I also have to acknowledge Corey Wong of the USFS, who had the vision 10 years ago to maintain Long Lake as a public amenity when it was identified on the forest service land disposal list. But without the Crested Butte Land Trust, this land exchange would never have been accomplished.

“The Valley Housing Fund sincerely thanks these three partners and the many donors who contributed to its success,” continued Starr. “It is truly a win-win-win … Long Lake remains a public amenity, the Clark parcel and most of Copley Lake are now part of the national forest, and the VHF has significant funds to help create affordable housing in Gunnison County.”

The forest service agrees with the significant impact of the transaction. “This land deal will provide indelible protections to landscapes important to all of us while also addressing a key community challenge,” said Matt McCombs, Gunnison ranger for the U.S. Forest Service. “The innovative generosity and forethought that kick-started this effort combined with the plucky fundraising that closed it out is a reflection of the remarkable land ethic native to the Gunnison Valley and I’m honored the U.S. Forest Service could play a part in seeing it through.”

Durant said that while the fundraising and project coordination took years, the next step for the CBLT is just beginning. “We are now moving on to the stewardship aspect of Long Lake,” he said. “We are already under way and working with the TAPP [Tourism and Prosperity Partnership] for new signage to be put up this summer at the trailheads,” he said. Durant indicated signage would be located at both the new trailhead by the east side of Meridian Lake up Washington Gulch and at the Allen property, which is where most people have been accessing Long Lake for decades.

“We are also going to start the community engagement portion of looking at Long Lake,” Durant continued. “How can we improve the trail network to protect the natural resources up there while providing access to the lake? It is a unique location that continues to attract more and more people but doesn’t have the needed infrastructure to handle the growth. We have been talking to the neighbors and the county and other stakeholders to help determine the right next step.”

Gardner said the TPL is still involved with other potential projects in the area. “While the Long Lake transaction is definitely unique, especially with the original Clark donation tied to the affordable housing, we are talking to the forest service about other inholdings in the forest,” he said. “We are always looking for projects to protect more land for the public to enjoy. That’s our mission. Partnerships are so important. We couldn’t do the work we do without good partners on the ground.”

“The suite of partners was great,” added Durant. “That consortium of partners really made the project work. The idea of a community-driven project is a hallmark of the Gunnison Valley and this exemplifies that. These sorts of creative projects have been baked into the Crested Butte Land Trust for a long time. These multi-faceted conservation projects are standards within the valley. It’s been really cool.”