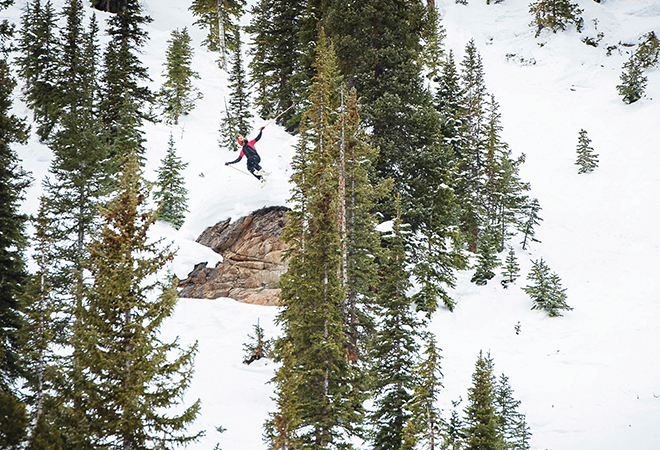 CBMST coaches practice what they preach

It’s the longest running freeride event in the nation, formerly known as the Extremes, and this year the energy remains vibrant surrounding the athletes at the venue.

Granted, gone are the days of a packed audience corral complete with grills and free-flowing adult beverages but the skiing and riding by the athletes remains a spectacle to behold. And by the conclusion of the IFSA Freeride World Qualifier (FWQ) two-star event on Monday, March 9 and the four-star FWQ event on Wednesday, March 11, the top three spots across the board was littered with local names.

The two-star competition on Monday did not disappoint, as fans were treated to one athlete throwing a backflip out of Angle Chute and another spinning a 720 off of House Rock, to name just a few of the highlights, all vying for a few spots left over among the athletes already pre-qualified in the four-star event.

When the smoke cleared from the two-star competition, a handful of locals made the cut, led by a couple of Crested Butte Mountain Sports Team (CBMST) coaches. CBMST coach Annika Winans won the women’s ski, with co-coach Montana Wiggins taking third among the men and former WCU athlete Riley Moser taking second.

Meanwhile, veteran local competitor Alex Reidman placed third among the women to make it to the four-star day.

“I wasn’t too concerned with how I did. I just wanted to have fun,” says Winans. “I’m coaching now so that keeps me on my toes and I missed competing a lot.”

On Wednesday, 93 snowboarders and skiers then slid up to the finals venue on Staircase, faced with firm conditions covered by a gentle blanket of fresh snow. The list of athletes included a former Banzai downhill race champion, several former Junior Freeride World Tour standouts, as well as a couple of veteran FWQ tour competitors.

The snowboarders had the first runs down the venue with more than 30 women and men making the most of the venue.

Things then ramped up when the women skiers started, as they provided some of the most fluid and in-control sliding of the day down the rock-riddled, mogul-strewn tree farm with a pitch nearing the high 40s in several spots.

Winans brought the hometown crowd to their feet with fast and fluid turns through the top of the venue, mixing in some airtime as well to earn her second place on the day.

“I had something specific in mind,” says Winans. “I wanted to ski down quickly and hit some features I had picked out. I wanted to hit one of the features bigger than I did, but it went well.”

CBMST coach Erik Hilb had pre-qualified for the four-star event despite not competing for several years, somewhat at the behest of his peers.

“I used to compete in four-star events but I hadn’t done a comp in four or five years,” says Hilb. “I was asked to do it so I jumped back in. It felt fun to get back into the start gate again.”

The first handful of skiers had trouble on the venue but Andrew Rumpf woke the crowd up with his run. CBMST coach Matt Evans then stepped it up for everyone as he flew down the venue faster than anyone had all day while maintaining his composure.

Other athletes continued to struggle in spots but not without the occasional backflip mid-run and making fast work of the Handrail section along the side of the Staircase.

But Hilb sealed the deal as the second-to-last competitor of the day. After lashing his way through the top of the venue, Hilb threw a left-side 360 off one rock at the top of the venue and tossed in additional airs down the run, keeping everything fluid and fast.

“I didn’t think a lot about it,” says Hilb. “There were a couple things that I’ve wanted to do all year in there. It was just another run, but just push it a little harder on that one run.”

When scores were crunched, Hilb came out on top, winning the four-star qualifier and taking home “a t-shirt, a balaclava and a $600 pre-loaded gift card.”

While COVID-19 has put the kibosh on the remainder of the season, both Hilb and Winans doubt they will continue the competitive freeride tour next season, with Winans looking to go to law school and Hilb unsure of what the future may hold. Right now, it’s just about finding things to do.

“Hopefully I can find some work and probably ski a lot of backcountry,” says Hilb.

“I like Nordic skiing so I’ll keep doing that and look for a backcountry setup,” adds Winans. “I’m out of a job so I’m kinda going stir crazy.”