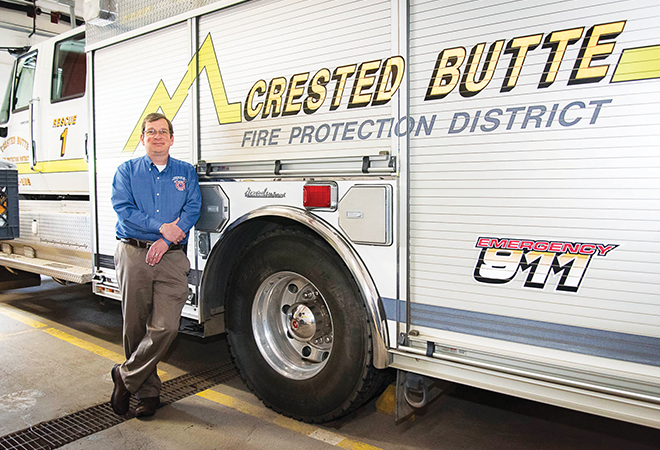 Helping the people who help people

Sean Caffrey’s office walls are lined with historic photos and maps, fire crew portraits, awards, diplomas and certifications, and a child’s drawing of the station is framed next to Susan Anderton’s of the same. The building, which is attached to the fire station, was once the CF&I mining company’s warehouse when Crested Butte’s skies were thick with the pungent smoke of locally mined coal that heated all the buildings and homes.

Peeking out of the top pocket of Sean’s crisp white shirt is a pen topped with a very round smiley head, its red yarn hair spiking out in all directions like a sea urchin and rather atypical of what other fire district CEOs might carry next to their embroidered logo. This is, in part, what makes Sean a perfect fit for Crested Butte. He punches out quick, witty, one-liners that make him comparably like the Rodney Dangerfield of the Crested Butte Fire Protection District, with a lot less snarkiness but still enough to make you snort your beverage out through your nose.

Sean proudly proclaims himself as a nerdly homebody. “No Machu Picchu or Antartica. I like to ski with lifts. I can’t imagine backcountry skiing—climbing the mountain by myself and to ski down and not wind up at the bar? I’m a totally inbound skier. I do all sorts of things but I’m a low intensity outdoors person. I like to walk the dog. I have an e-bike. It’s a total nerd bike,” he admits.

Born in Buffalo, New York, Sean is serious when he laughs about moving to 9,000 feet in elevation for the mild winters, having split his childhood between Buffalo and Rochester where the winters are notoriously harsh and dark. “Here, I slam the car door and the snow just falls off. It’s spectacular. It’s not anything like Buffalo snow, which is like concrete.”

Sean started skiing the age of 12 at the resorts around Canandaigua, N.Y. “I can’t ski on powder … if my edges aren’t chattering on the ice, I can’t ski it,” he grins about the slick ball-bearing ski conditions of upstate. Going skiing was one of the activities of his Boy Scout Troop, and Sean achieved Eagle Scout, spending his summers camping at Tupper Lake outside of Watertown. He also taught small boat sailing to scouts at their Adirondack camps. “My parents had a sailboat on Lake Ontario. I think that’s how I wound up here. I like living in the mountains.

“A lot of people blame their Boy Scout First-Aid merit badge for bringing them into the field,” he grins. Sean had been volunteering as a dispatcher for the local ambulance service during high school in 1987, which definitely influenced him. He graduated from high school in 1988 and enrolled at George Washington University as the third student ever to sign up for their new program in Emergency Medical Services (EMS). He earned his EMT card in 1988, his paramedic certification in 1991 and graduated with a bachelor of science degree in emergency services administration in 1992.

Sean spent eight years in the Washington, D.C. area working at Children’s National Medical Center as a paramedic on their transport team. He also volunteered in Virginia, where, he says, “The name of the town took up the whole jacket—‘Prince William County Department of Fire and Rescue.’ They had to use very small print.”

He explains, “Essentially, we had a 100-mile radius to grab kids from outlying hospitals and bring them into the Children’s Hospital.” He notes that there were hundreds of hospitals throughout that radius that they picked up from. “It was really rewarding in that it was a chance to hang out with kids and make them feel better.”

Sean had been through Colorado a couple of times but had never spent any time in the state. That changed when he saw an ad in an EMS journal for an assistant ambulance director in Frisco. “I had no idea where Frisco was. We had a road atlas in the office and looked it up. It was a green splotch in the middle of Colorado and I thought it had to be better than all the traffic in the metro Washington area.”

He was hired, so he loaded up the pick-up and moved west in January 1996. “It’s pretty impressive as soon as you drive out of the Eisenhower tunnel and see Buffalo Mountain and Peak 1 and  2.” He was mostly working and skiing a little bit, “which is always convenient being in a ski town for skiing, and I’m a fair weather skier.”

After 13 years in Frisco, by the time he left in 2009, Sean had been promoted to the director position. He had married his college friend Sarah in 2004. “We had stayed in touch. She worked for General Electric and transferred to the Denver area.” Their son Tiernan was born in 2006. Sean moved his family to Denver in 2009, took a job at Colorado Public Health and Environment working for the state EMS, after which he switched jobs in 2013 to work for the University of Colorado School of Medicine, running a program for the pediatric emergency medical group for five years.

“It was a statewide program to improve the ambulance and emergency hospital room care. I was a paramedic in a room of 180 doctors and I was the only paramedic. They were all pediatricians whose opening line is, ‘Does your tummy hurt?’ I’ve always been interested in medical but I didn’t want to spend the eight to 12 years to do the medical degree. I was into the administration. I get to take care of the emergency service people. It’s rewarding to help people but it’s even more rewarding to help the people who help people.”

When Sean took the position of CEO of the Crested Butte Fire Protection District, the couple decided to keep their son in a Denver school where he’s been studying the Manadarin language and culture since kindergarten. Also, Sarah had an executive corporate career. However, with Tiernan graduating from eighth grade this year, both will move up here so he can start ninth grade at CBCS. The family is currently building a house on the mountain, next to the Mt. Crested Butte fire station, “and who better to have a house there?” Sean laughs.

As chief executive officer of the Fire Protection District, Sean is basically the district’s administrator. “We’re our own local government and our own special taxing district. We are a chunk of your property taxes and provide fire protection and emergency medical services covering 250 square miles,” he explains and recalls his first days here. “I got here on the third of July. I was getting a tour of the station that first day and Rob Weisbaum says, ‘This truck works great in the water fight,’ and I said, ‘What?’ Rob goes on to explain that we use our high pressure water truck to spray down the townspeople and I thought, does the insurance company know about this? So, you turn the hose on the citizens? In a lot of places they call that riot control, but here it’s a thing.”

Meanwhile, by his second day, he was pouring coffee for the Fire District’s well attended July 4th pancake breakfast before the parade. ”We make a lot of coffee and run around refilling people’s cups—that’s what the district manager does, pours coffee,” he discovered but he also feels, “It’s a great little mountain town, a crazy little mountain town. We should have more of them. I’ve gotten to cruise all around Colorado and Crested Butte is a crazy little ski town, 27 miles from anywhere, and anywhere is nowhere in particular.

“Professionally for me here, the history of this fire department is amazing because every third person in this town has been with the fire department or on its board. The best emergency organizations are really well integrated with their community and this community has that. I can’t walk down the sidewalk and not connect with someone who hasn’t been involved with the fire department. It’s unusual, and that’s why I took the job. It’s got a great volunteer group and it’s growing our organization itself.”

He notes that last February of 2019 the department ran 61 calls, both fire and ambulance, and in February of this year they ran 107. “It tells me that the Epic Pass is having some impact,” he laughs. “Our calls are a function of how many people are in town. It’s not just tourists, but it’s a function of people being around, all times of the year.”

Sean will continue to be a homebody—having a garden and going out to restaurants and drinking craft cocktails is his cup of tea. “A town of this size that has so many crafted cocktail places per capita just rocks,” he claims. When asked about those really long ski lines a couple of weeks ago that amused the locals, he responds with a chuckle, “You call those lines? Maybe you get up to 6,000 on a busy day but at Breckenridge you get close to 40,000.” Nevertheless, he feels he’s in the right place. “I love being here and part of this organization and town. I’m not the most outgoing guy and the family is a bunch of homebodies but we love it here nonetheless.”