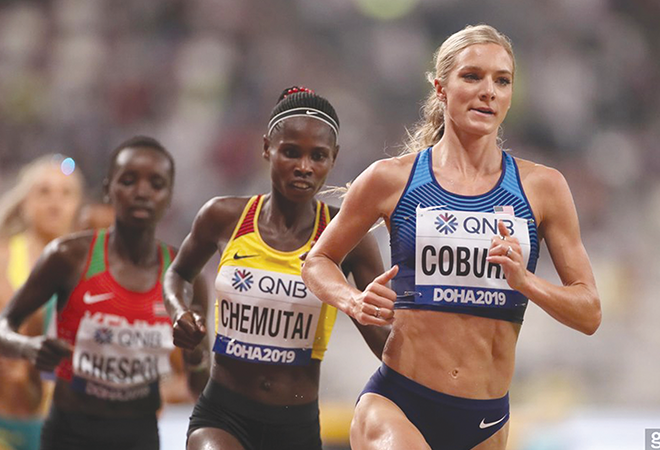 Emma Coburn, New Balance professional athlete and former Crested Butte Titan, is rolling with the way things are as her buildup for the 2020 Olympic summer games in Tokyo has been postponed until 2021. But that doesn’t mean her world has stopped, as she remains focused on a return to the Olympics with continued training in Boulder as the track and field race season remains in flux.

With the 2019 season lasting six weeks longer than usual, Coburn mixed in one indoor race in the winter along with continued preparations for the upcoming outdoor race season and eventually the Olympics, initially set to start July 24.

“I knew my buildup to the 2020 racing season needed to be a little more conservative, given my shorter timeline,” says Coburn. “I raced once, and it was fine, nothing very exciting. My training was good and I was feeling strong and feeling ready for the 2020 outdoor track season. My first race was supposed to be a 10k on April 3 in Palo Alto, California.”

That wouldn’t be all for Coburn though, as she had additional races in the spring lined up before she would enter the Olympic race schedule.

“February and March were meant to be for building our base of training and then start racing in April, May and June,” explains Coburn. “In early March we just started doing workouts to specifically get ready for our April 10k. After that 10k, I was going to race a 5k in May and a steeple in June and the Olympic trials were scheduled at the end of June.”

Then, as COVID-19 epidemic started to flare up in China and showed hints of turning pandemic, the Olympics started to come into play as organizers, nations and athletes began to consider postponing the games, scheduled to start July 24.

“USA Track and Field wrote a letter to the International Olympic Committee stating their support for postponement,” says Coburn. “Track is an event where a lot of pro athletes train at universities and once the universities started getting closed, many athletes weren’t able to train. I am the vice president of a group called the Athletics Association and we represent professional track and field athletes globally and speak up on what the athletes are wanting. We did a survey and 4,000 professional track athletes around the world responded, with 78 percent saying that they wanted postponement and 87 percent saying their training was impacted. We announced the results of that survey in the New York Times and then two days later the Olympics were officially postponed.”

That hasn’t slowed Coburn down though. While workouts on the CU campus and in public training facilities are closed, Coburn has plenty of opportunity to get in the training needed to remain prepared.

“Right now, I’m training and am doing well. In Boulder, we are allowed to exercise with people in our household so I’m making my husband, Joe, who is also my coach, run with me a lot more,” says Coburn. “I am able to run outside on the roads in Boulder and run good workouts. A year ago I rented an office and small warehouse that I turned into a gym for my team to lift weights in, so that is private and I’m able to still lift weights three times a week and run about 85 miles a week right now.”

The effort is all to stay in stride, ready to make her move when the racing season resumes, and continue her goal to return to the Olympics for a shot at another medal to go with her bronze medal from the 2016 games in Rio de Janeiro.

“There has been no information on what track meets we will be able to race in this summer,” says Coburn. “Realistically, I think I’m training in the hopes that we will get some racing in the fall. I’m still training with eyes on Tokyo! Our Olympic trials will be next summer so I’m making sure that I’m ready for that.”

Meanwhile, Coburn continues to keep her hometown of Crested Butte in her thoughts.

“I hope everyone in Crested Butte and Gunnison is healthy and doing okay,” says Coburn. “I know it’s a scary time, but if we all do our part, we can get through this together. Sending my love to Crested Butte.”